Saudi Arabia on Tuesday announced it would cut oil production by a stunning 1 million b/d in February and March, sending crude prices to a 10-month high. 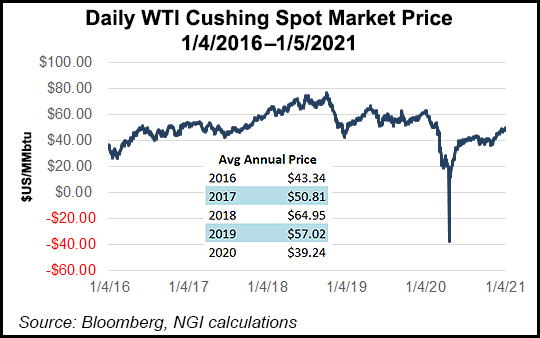 The news came at the conclusion of the latest monthly meeting of the Organization of the Petroleum Exporting Countries and its allies, aka OPEC-plus. Saudi Arabia leads the cartel.

“Saudi Arabia put the cherry on the cake,” said Rystad Energy analyst Bjornar Tonhaugen. “If there is one way to describe what its voluntary cut means for the market, ‘happy hour’ is a pretty fitting term. They say there is no such thing as a free meal, but it’s difficult to see how a beast of a 1 million b/d cut is justified behind closed Saudi strategist doors.”

Oil prices soared on the news. In trading Tuesday, the West Texas Intermediate (WTI) prompt-month contract surged to a $50.20/bbl intraday high, the first time it has done so since last February, before settling at $49.93.

The decision by the Saudis is a “new year present” for the oil market, said Russian energy minister Alexander Novak.

The cartel, which is meeting on a regular basis virtually to review the production quotas, last month had agreed to increase output by 500,000 b/d, bringing net cuts since the start of the pandemic to about 7.2 million b/d.

The members “acknowledged the need to gradually return 2 million b/d to the market, with the pace being determined according to market conditions,” OPEC said at the conclusion of the meeting. Adjustments to the production levels for February and March are to be implemented per the voluntary detailed schedule. Production adjustments for April and subsequent months are to be decided on Feb. 3, the date of the next meeting.

According to the new accord, the deal appears to allow Russia, a leading OPEC ally, to increase oil output by 65,000 b/d in February and March, with Kazakhstan allowed to increase production by 10,000 for two months.

“The increases are half what would have been allowed if the overall target had been raised by 500,000 b/d,” said Mizuho Securities USA LLC’s Robert Yawger, director of Energy Futures. The cartel’s other members agreed to keep output steady in February.

The agreement “looks like a rather desperate effort by Saudi Arabia to hold the producer group together, though I do believe Russia is simply asking for what they originally signed up for,” said the Mizuho analyst. “Unfortunately for everybody concerned, there is a certain Catch-22 involved.”

Balances within the cartel “have become as fragile as ever,” Tonhaugen said. “Russia and Kazakhstan got away with increasing their output in February and March, while other OPEC members have to bite the bullet.”

The Saudi offer did not take an “official form,” he said, and was “probably meant to be blurry and subject to changes when it comes to the actual cuts when the time comes.”

While the agreement “offers some market stability until the end of March,” it “is not a deal that OPEC members may digest easily. Many oil producers whose fiscal budgets depend on oil output are keeping their taps tight, while sub-complying alliance member Russia is allowed to enjoy a boost.”

While Russia was given the green light to up oil production with Kazakhstan, it is making the “chronically” noncompliant OPEC-plus members “the clear winners of this meeting,” the Rystad analyst said. “As the winter turnaround and maintenance season approaches, the two countries want to avoid shutting in any additional production for nonmaintenance reasons. In Russia especially, shutting off an aging mature well can be a death sentence, as often it is uncommercial to turn back on production.”

Fellow OPEC members that also want to raise output could be upset by the agreement, including Iraq and the United Arab Emirates, but “the market will probably speculate that slipping compliance may be on the cards, leaving Saudi Arabia with the worst cards on the table,” Tonhaugen said.

“Saudi Arabia’s move is turning the knife deep though and cutting the ‘surprise’ amount is definitely going to help prices level up.” Reducing output by 1 million b/d “is a deep and painful production curtailment and the act will paint a big question mark over the Saudi strength in the alliance…The bulls are now jubilant over the Saudi commitment, but it is quite difficult to swallow the added curtailment size. It’s just too good to be true!”

Yawger was skeptical about whether the Saudis volunteered to cut output by 1 million b/d for two months. Bloomberg News, he noted, on Monday reported that Saudi oil shipments increased to 6.7 million b/d in December from 6 million b/d in November, based on tanker tracking data.

“Of course, production and exports are not the same thing,” Yawger said. “The Saudis can cut production, but still draw on available storage to satisfy their export requirements. They can draw on storage to increase exports. If that is the case, and it is the most likely scenario, the Saudis don’t exactly come off as the big OPEC-plus martyr that today’s agreement implies.”

BMO Capital Markets analysts viewed the agreement as a positive for crude prices and for energy equities.

“While the demand outlook remains murky due to the ongoing pandemic, we believe this agreement should be enough to stabilize oil prices in the $45-55/bbl range over the next six months,” the BMO team said.