U.S. midstream management teams doubled down on cost cuts and reduced capital expenditures (capex) during second quarter earnings season. However, many also struck generally optimistic tones about improving volumes and a gradual recovery from the energy slump imposed by the coronavirus pandemic. 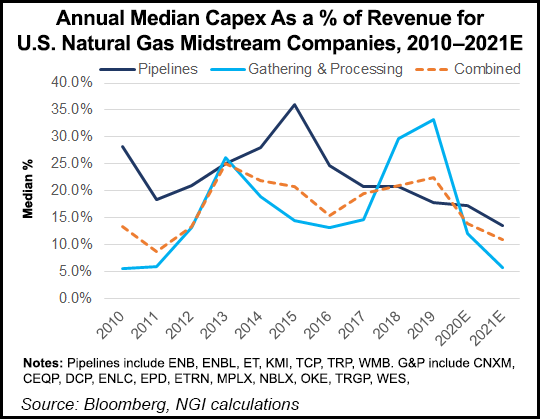 The pandemic “and the associated drop in crude oil prices led to significant volume shut-ins throughout many of the producing regions in the country,” CFO Thomas Long said during the August earnings call. “We have also seen a reduction in spreads on our crude and natural gas pipelines from the Permian to the Gulf Coast as well as crude spreads from the Bakken to the Gulf Coast.”

However, Long added, “our NGL segment continued to set records during the second quarter, with our transportation volumes reaching new highs, primarily driven by record volumes on our Mariner East system, as well as strong volumes across our Texas NGL pipelines.

“We are encouraged by the signs of recovery that we are experiencing as current production volumes in the Midland Basin through our processing plants” as well as “volumes across the Mariner East complex and volumes through our Texas NGL fractionation assets are all currently above” pre-pandemic levels, Long said.

Raymond James & Associates Inc. analysts, led by Justin Jenkins, said the NGL theme is “gaining more traction as opposed to exposure to crude/refined products. We won’t be surprised to see this theme continue,” especially if oil prices fail to rise out of the $40s this fall.

Energy Transfer nevertheless is bracing for a prolonged recovery — like most of its peers — keeping capex in check. The company earlier this year reduced its growth capital outlook by $600 million  and now expects to invest about $3.4 billion before curtailing spending substantially next year. Growth capex is forecast to be roughly $1.3 billion in 2021 before falling to a range of $500 million to $700 million in 2022 and 2023.

“Given the current state of our industry and the number of assets that are not fully utilized across the midstream space today, our evaluation process for new projects is very stringent, and our threshold for returns is the highest it has ever been,” Long said.

Plains All American Pipeline LP painted a similar picture. Volumes stabilized in the second quarter, and it started to see improvements in July, albeit off the exceptional lows reached earlier in the year. The Houston-based company expects further improvement as production scales up in the second half of 2020.

“Our current expectation is that production will continue to slowly recover from the trough in May through year-end as shut-in production comes back online and some completions continue,” CEO Willie Chiang said during the second quarter call.

He is, however, only cautiously optimistic.

“I would highlight that we expect the market to continue to be dynamic in the near term, influenced by multiple factors of uncertainty, including the pace of demand recovery due to potential COVID resurgence and geopolitical developments,” Chiang said.

Indeed, analysts say midstreamers are potentially vulnerable to a virus resurgence and shifts in public policy, with the U.S. presidential election in November the looming elephant in the room.

If Biden were to “ban or restrict drilling on federal lands, that will affect volumes over time,” Rau said. If he were to raise taxes, it could impact allowed returns on equity for assets under federal jurisdiction. Also a concern: “will a Biden presidency slow the rate of pipeline approvals?”

The political uncertainty adds reason to pull back on new investments, at least in the near term.

Plains All American reduced its 2020-2021 expansion capital program by 6%, following reductions earlier in the pandemic. “We expect to further lower levels of capital investment,” Chiang said, “as we focus on smaller projects.”

The company is also cutting costs. “We continue to streamline and drive efficiencies across all aspects of our business,” Chiang said. “In May, we estimated the benefit of this process to result in $50 million to $100 million of cost savings for 2020. Based on our progress to date, we’re on track to achieve the higher end of our range. We also expect a significant portion of our savings to endure in future years as we continue to reduce our cost structure.”

For all the factors out of their control, however, midstream executives say they are optimistic long term.

“Despite the near-term uncertainty, we remain constructive in our long-term view of global energy demand,” Chiang said. “We believe the world needs U.S. energy, the Permian Basin is critical, and our positioning supports a positive and a constructive outlook for our business.”

Dallas-based EnLink Midstream LLC said lower costs and encouraging volumes in the Permian positioned it well for further recovery in the second half of the year, though it, too, is cautious and actively scaling back capex. It slashed its 2020 capex program by 66% from the 2019 level to about $220 million at the midrange. It expects costs to be down by $120 million this year when compared with 2019.

“We have a continuous improvement mindset, and we will be relentless about maximizing the cash flow we generate from our business,” CEO Barry Davis said on the earnings call earlier this month.

For all the adjustments and the new-found volume momentum, midstream companies will continue to face serious headwinds ahead of the election and apart from any second wave of the virus, said Enverus, including threats to operator solvency and capital raising challenges.

“It’s been a tough year for the industry and a rebalance will be anything but quick,” said Enverus Vice President Bernadette Johnson, who oversees strategic analytics.

“Somewhat caught in the middle between struggling E&P companies and the historical drop in demand from consumers, due to COVID-19, the midstream sector in particular is also vulnerable to regulatory threats, legal rulings and a challenging pipeline permit approval process,” Johnson said.Additionally, bankruptcies among larger companies “have a tendency to initiate a domino effect, impacting everyone down the line,” Johnson said. “Contracts are called into question and so is timely delivery of payment. It certainly throws doubt and uncertainty into the mix. But this is a resilient industry and hydrocarbons aren’t going anywhere anytime soon.”