Aggressive cost-cutting helped prop up the bottom lines in the second quarter of two big Lower 48 midstream operators, Enable Midstream Partners LC and EnLink Midstream LLC, and expense control remains a high priority amid the shocks of the coronavirus pandemic and the demand destruction it created. 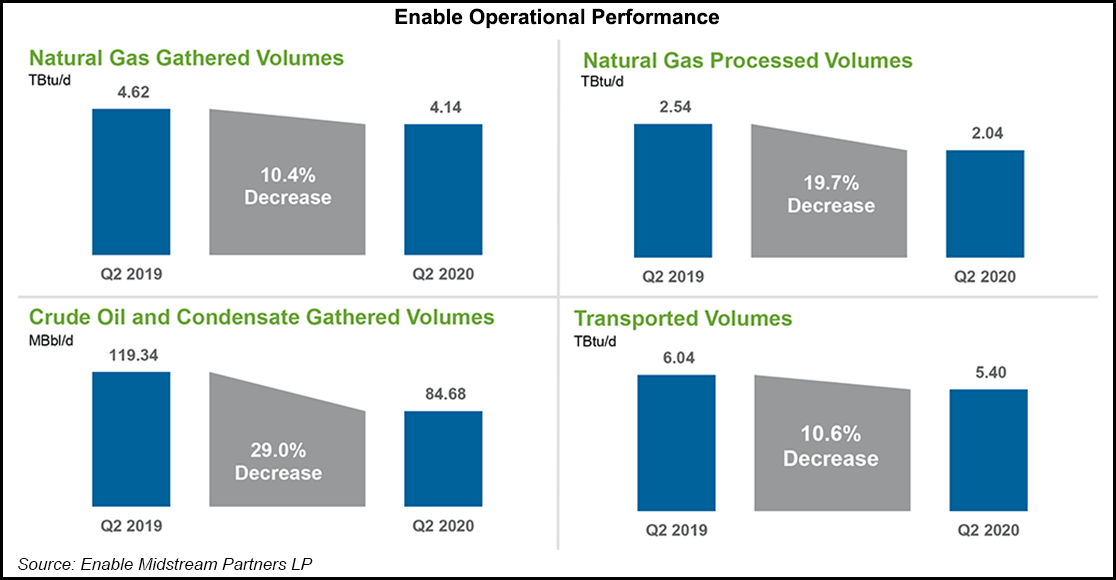 Oklahoma City-based Enable said it moved swiftly to align its expense base with lower revenue and volumes, as it told investors it would at the start of the second quarter.

“We’ve made good progress executing on our expansion capital and cost reductions we announced in early April,” CEO Rod Sailor said during the 2Q2020 earnings call on Wednesday. “On the cost front, we recently took steps to align our organizational structure,” resulting “in a reduction of 165 positions across the company, including the impact of planned retirements and eliminating open positions.

In early April, Enable said it would reduce total expansion capex for the year by 48%, or $115 million, largely affecting projects unlikely to contribute to revenue this year. The company cited sharp declines in commodity prices and producer activity across its footprint and future business uncertainty created by virus outbreaks. It also planned to carve out costs from its business, with estimated savings of $35 million in 2020, growing to run-rate savings of about $70 million in 2021 for operation and maintenance and general/administrative expenses.

Enable’s total second quarter costs of $435 million were down from $568 million a year earlier.

Enable also has not “experienced any meaningful credit losses” to date in 2020. “Our credit profile is also supported by a strong base of large investment utility customers in our transportation and storage segment,” Sailor said.

In the transportation/storage segment, Enable contracted or extended almost 1 million Dth/d of capacity during the second quarter, including a previously announced re-contracted capacity with CenterPoint Energy Resources Corp (CERC). The contracted term for most of the renewed CERC capacity is nine years and the effective date of the new contracts is April 1, 2021, Sailor said.

Enable posted second quarter net income of $44 million (8 cents/share), down from $124 million a year earlier (26 cents). Distributable cash flow (DCF) was $148 million, a decrease of $49 million from a year earlier.

Dallas-based EnLink, meanwhile, is in the midst of driving $120 million of expenses out of its cost structure. It also slashed its 2020 capex program by 66% from the 2019 level to about $220 million at the midrange.

“When the team set out to drive costs from the business earlier this year, the expectation was that $100 million would be sustainably removed from operating expenses and general and administrative expenses,” CFO Pablo Mercando said during the quarterly earnings call Wednesday. “The steps taken were tough, but we are seeing the benefits of those measures in our financial results, and we now expect to exceed previous cost reduction targets by 20%, bringing the total savings to $120 million for 2020 compared to 2019…

“Most of these reductions were to fixed costs and are, therefore, largely sustainable in the recovery.”

The one “major capital project” for 2020 is the Tiger natural gas liquids processing plant to serve Permian Basin operators in the Delaware sub-basin, Mercado said. Most of Tiger’s “roughly $60 million investment is now behind us. We expect the remainder of capital this year to be spent on well connects and gathering infrastructure, with total capital for the year coming in around the midpoint of our guidance range of $190 million to $250 million. We expect our capital expenditures to be significantly less in 2021 than the amount we are investing in 2020.”

EnLink’s quarterly operating costs and expenses declined year/year to $276.5 million from $356.8 million. Reduced capital spending and cost reductions helped drive $72 million excess free cash flow in 2Q2020, up from $44 million in the prior quarter. The company is on pace to meet or exceed the high end of its previously announced full-year 2020 guidance of $260-280 million.

“We have a continuous improvement mindset, and we will be relentless about maximizing the cash flow we generate from our business,” CEO Barry Davis said on the call.

The company said its Permian segment profit and lower costs drove the overall advance in net income as producers continued to drill and complete wells through the trough of the downturn. Producer shut-ins were substantially less than EnLink management had expected at the onset of the pandemic.

“Our Permian segment has remained tremendously resilient throughout the downturn, with natural gas volumes increasing on our system quarter-over-quarter,” Davis said. “We achieved 35% growth in Permian segment profit for the second quarter as compared to the first quarter.”