U.S. liquefied natural gas (LNG) growth outpaced all other supply additions across the world last year by a wide margin, according to an annual report released by the International Group of LNG Importers (GIIGNL) this week. 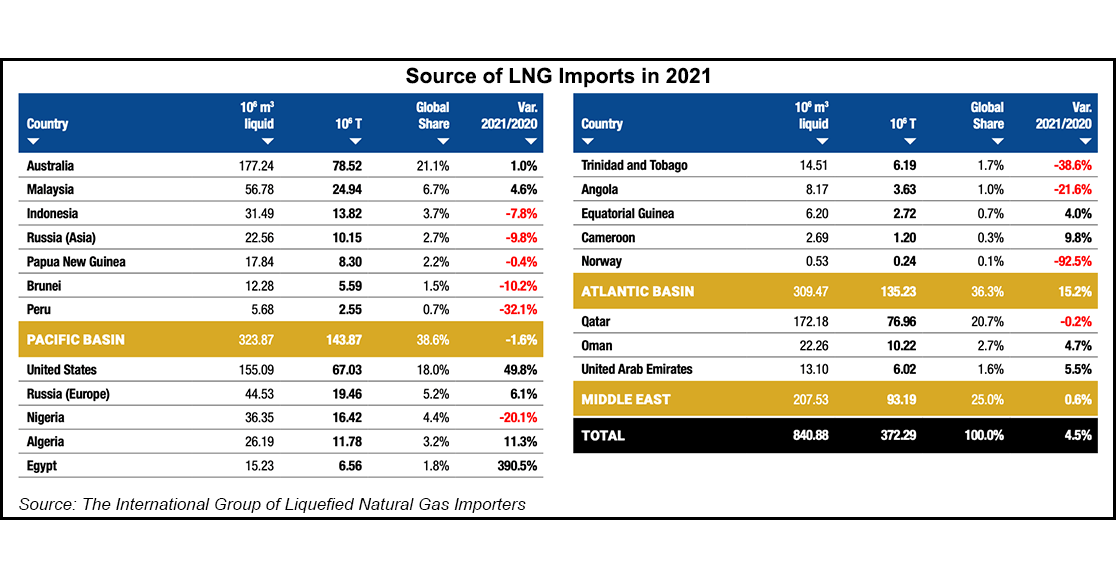 New supply was also added, but to a much lesser extent in various countries, including Egypt (5.2 Mt), Algeria (1.2 Mt), Malaysia (1.1 Mt) and Australia (0.8 Mt). U.S. liquefaction also expanded as supply from Nigeria fell by 4.1 Mt on maintenance issues. Trinidad and Tobago’s exports dropped by 3.9 Mt due to a lack of feed gas, while Norway’s exports fell by 2.9 Mt due to delays in the restart of Hammerfest LNG.

The jump in U.S. exports was due to five large liquefaction projects commissioned in 2020 at the Cameron, Corpus Christi and Freeport LNG terminals. A sixth train that was commissioned at the Sabine Pass terminal last year also boosted American exports. Asia purchased 49% of U.S. LNG exports, followed by Europe at 32%, the Americas at 18% and the Middle East at 1%

The United States also consolidated its position as the leading supplier of spot and short-term LNG deals, accounting for nearly one-third of all those deals worldwide.

Australia sold the second most spot cargoes in 2021, accounting for 18.7% of global transactions, according to GIIGNL.

Overall, the United States remained the third largest LNG exporter last year. Australia was the world’s leading exporter at 78.5 Mt and Qatar was the second largest supplier at 77 Mt.

Demand for the super-chilled fuel rebounded last year as Covid-19 restrictions across the world eased and economies recovered. LNG imports reached 372.3 Mt in 2021, up 4.5% year/year.

Firming demand, coupled with colder weather in the Northern Hemisphere, supply outages and drought in South America sent spot prices higher throughout the year and left few cargoes for Europe, where imports dropped by 8% year/year.

“High spot LNG prices in Asia and Europe discouraged to a certain extent the resort to spot LNG procurement,” GIIGNL said. “This was particularly blatant in price sensitive countries like India.”

Spot volumes delivered within three months of a transaction date reached 31% of total LNG imports last year, down from 35% of total imports in 2020. Higher prices did bring buyers back to the negotiating table in 2021, when 70 Mt of new long-term supply contracts were purchased to lock in more favorable terms and shield from volatility on the spot market.

Asia managed to outcompete Europe for most of the year, but as European inventories dwindled and Russian deliveries dropped off, buyers there stepped up purchases in a trend that’s continued this year.

““The LNG market is growing quickly and the recent price hikes indicate a structural imbalance between demand and supply growth,” said GIIGNL President Jean Abiteboul. “The looming price volatility has been exacerbated by the Russia-Ukraine conflict, and the current European energy crisis proves to be a stark reminder of LNG’s vital role in ensuring energy security and economic stability.”