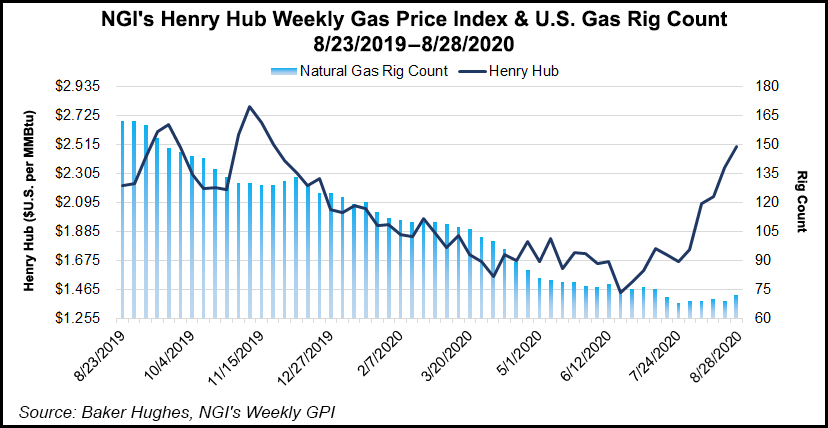 “America sneezes and the rest of the world catches a cold,” Souki said in a podcast with Columbia University’s Center on Global Energy Policy. Souki co-founded Tellurian, which is developing the 27.6 million metric ton/year (mmty) Driftwood LNG export project in Louisiana. Prior to that, he co-founded Cheniere Energy Inc., the United States’ largest gas exporter.

With the Covid-19 pandemic devastating energy demand, the number of gas-focused drilling rigs in the United States as of last Friday (Aug. 28) had dropped to 72 from 162 a year ago, according to Baker Hughes Co. U.S. gas production is currently at 89 Bcf/d after being 95 Bcf/d six months ago, Souki noted.

With the reduced drilling and the approach of cooler weather, Henry Hub spot prices have increased 30% in the last four weeks and are currently at about $2.50/MMBtu.

“The rest of the world is doing the same thing,” Souki added.

European gas prices at the Dutch Title Transfer Facility (TTF) have increased in the last month from less than $2.00 to $4.843 on Wednesday for calendar year 2021, according to NGI data. Northeast Asian LNG prices have risen in the same timeframe to $5.294 on Wednesday from under $3.00.

“Having the U.S. drill with only 70 rigs affects the rest of the world and I’m dumbfounded at how fast it happened,” Souki said during the interview.

“I still don’t understand what happened on a fundamental basis to cause this difference but the European markets are sending us a signal, which I still don’t understand but I think the root cause of everything is that we are not drilling in the United States fast enough to be able to supply ourselves and the rest of the world, and that for me is a big surprise,” Souki told Columbia.

IHS Markit’s Michael Stoppard, chief strategist for global gas, told NGI “that the dropoff of associated gas production, as a result of shut-ins and reduced drilling, acts as a powerful and effective market stabilizer within North America. Those higher North American prices are being transmitted into global gas prices.”

Other factors that have supported European gas prices are reduced storage levels in the European Union (EU), which at the end of August were no longer above the year-ago level, partly as a result of reduced U.S. exports to Europe, Stoppard said. The figures do not include Ukrainian gas storage, which if added to EU storage would be a record combined inventory. That may indicate that Ukrainian storage has not been integrated into the wider European market, Stoppard said.

Another factor that has supported European gas prices is recently reduced French nuclear and hydro output, which has largely been compensated with gas-fired generation in other countries, he added.

Souki said he expects higher prices will lead “in the next six months” to positive final investment decisions (FID) for U.S. LNG projects. Tellurian in June delayed an FID on its Driftwood project by one year to 2021, with production projected to start in 2024.

If Henry Hub and TTF and northeastern Asian prices are climbing, “there’s going to be some pressure on people who need gas on a global basis to come back and say, ‘We need to make decisions now, not in a year from now,’” Souki said in the Columbia podcast, titled “What’s Ahead for U.S. LNG Trade,” which was hosted by Bill Loveless. “Because if you make a decision today, you get an answer in five years.”

Driftwood sustained a setback in late May, when India’s largest gas importer, Petronet LNG Ltd., canceled a preliminary deal to invest $2.5 billion for 5 mmty. Tellurian is continuing negotiations with Petronet.

Tellurian can offer partners a free-on-board price of $3.50/MMBtu as its business model owns upstream assets and pipeline transportation. However, Tellurian requires partners to invest $500 million in the company for every 1 mmty of guaranteed offtake.

“We also are going to need to take Henry Hub out of the equation, because you cannot suffer the volatility, so we have to apply the same rules in the U.S. that we’ve applied everywhere else in the world in the LNG business,” Souki said. “It needs to be an integrated project.”