Despite calls for increased output amid Russia’s invasion of Ukraine and threats to global supplies, U.S. crude exploration and production (E&P) companies have not moved an inch. Production was flat last week, extending a long-running trend, the Energy Information Administration (EIA) said Wednesday. 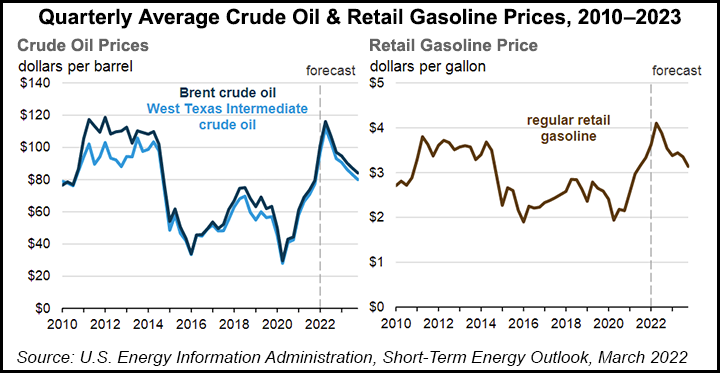 Production for the week ended March 11 held firm at 11.6 million b/d, EIA’s latest Weekly Petroleum Status Report showed. That was flat with the prior week and with all of February.

Crude prices this year soared beyond $100/bbl, reaching multi-year highs, as a demand rebound from the depths of the pandemic intensified and the war in Ukraine sparked supply disruptions amid deepening sanctions against Russia. The United States banned imports of Russian oil and natural gas, and far-reaching Western economic sanctions threaten to cripple Russia’s energy sector along with its broader economy.

Against that backdrop, officials in President Biden’s administration have called for U.S. companies to ramp up activity. However, E&Ps have emphasized that it takes time to elevate output substantially, and they also note demand uncertainty continues to permeate the global market.

Where Are Covid Cases Surging?

While coronavirus cases are on a downward slope in the United States following a year-long vaccination campaign, infections are surging in Germany and neighboring countries in Western Europe. China this month also reported a rash of outbreaks and instituted new lockdowns that impacted an estimated 30 million people. These virus revivals could threaten economic activity and, by extension, dampen demand for oil as spring arrives and more people typically travel, fueling consumption of gasoline, diesel and jet fuel.

“We still have to be mindful about this virus,” StoneX Financial Inc.’s Tom Saal, senior vice president of energy, told NGI. “Recent experience shows how big of an impact it can have.”

Indeed, after hitting record levels early in 2020, crude production plummeted in the United States as the economy slipped into a deep recession and demand dropped when the pandemic started. Saal does not expect a repeat, but substantial ups and downs in consumption of energy products may lie ahead, giving producers reason to proceed cautiously.

The war’s ongoing impact on demand, too, remains a wild card. Soaring inflation in the United States and other major Western economies, driven in large part by energy costs, also looms large.

While domestic demand for petroleum products remains well above 2021 levels, it has proven choppy week/week this year.

Total products supplied over the last four-week period averaged 21.0 million b/d, up 12% from the same period last year and driven by gains in travel fuel demand, according to EIA.

Last week, though, demand slipped 3% from the first week of March.

U.S. commercial crude inventories, excluding those in the Strategic Petroleum Reserve, increased by 4.3 million bbl from the previous week, EIA said. At 415.9 million bbl, however, inventories are 12% below the five-year average.

The International Energy Agency (IEA) on Thursday lowered its forecast for global oil demand this year. It cut its full-year growth outlook by 950,000 b/d to 2.1 million b/d for an average of 99.7 million b/d.

If the revised forecast bears out, it would mark a third consecutive year of demand that falls short of pre-pandemic levels above 100 million b/d.

Sanctions against the Kremlin also will cut into world supplies, IEA said. It estimated a supply deficit of 700,000 b/d in the second quarter. The second half of 2022 is enshrouded in uncertainty.

“The prospect of large-scale disruptions to Russian oil production is threatening to create a global oil supply shock,” the IEA researchers said. “We estimate that from April, 3 million b/d of Russian oil output could be shut in as sanctions take hold and buyers shun exports.”

OPEC on Tuesday painted a similar picture in its monthly report.

The Saudi-led cartel stayed with its world oil demand forecast from a month earlier, estimating consumption would rise by 4.15 million b/d in 2022. Still, it also noted mounting instability that could necessitate revisions.

“Looking ahead, challenges to the global economy — especially regarding the slowdown of economic growth, rising inflation and the ongoing geopolitical turmoil — will impact oil demand in various regions,” OPEC researchers said.