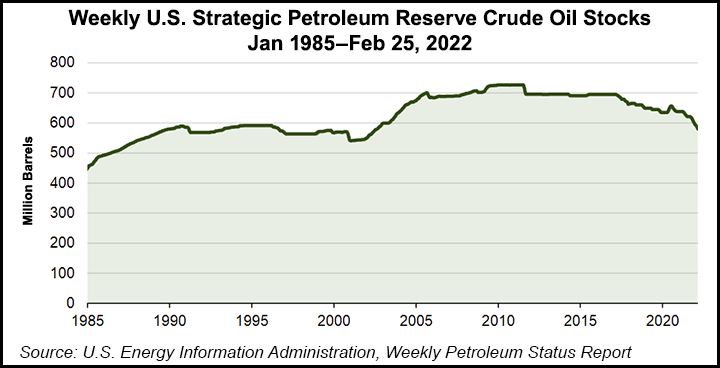 Production for the week ended March 4 held at 11.6 million b/d, EIA’s latest Weekly Petroleum Status Report showed. It hovered at that level throughout February as well, signaling that producers were in no hurry to ramp up activity to capitalize on lofty prices.

At the same time, demand increased, fueled by an accelerating U.S. economy and greater consumption of travel fuels derived from oil.

Crude prices, already elevated amid the strong demand, surged even further over the past two weeks because of the raging war and the increasing likelihood that Russian oil exports will dwindle, hampering global supplies. Russia is the world’s third-largest crude producer after the United States and Saudi Arabia.

Citing Russia’s unprovoked invasion of Ukraine, President Biden on Tuesday banned imports of Russian oil and natural gas in a move that compounded already severe sanctions against the Kremlin.

If the United States were able to galvanize European leaders to participate in the embargo, some 4.0 million b/d of Russian crude could get wiped from the Western energy landscape, according to Rystad Energy.

Brent crude prices, the international benchmark, topped $120/bbl in Monday trading – up more than 50% since the start of the year. After the Biden announcement the next day, prices spiked to $130 before pulling back on Wednesday.

Even before the Ukraine war started nearly two weeks ago, energy prices were soaring amid constrained global supplies, pushing the U.S. inflation rate in January to a 40-year high.

“This is the largest energy crisis in decades and the impact on the world’s most important commodity is going to be unprecedented,” he added.

Against that backdrop, Tonhaugen said U.S. producers are likely to ramp up output this year – both to fill an emerging void on the global stage and to capitalize on high prices. But new drilling is a time-consuming endeavor, and it could take months from producers to substantially lift overall output above current levels.

Prices are likely to escalate further “to destroy sufficient demand and incentivize a supply response through higher activity – both of which happen with a time lag of several months – to rebalance the market at a higher supply/demand/price intersection,” Tonhaugen said.

In the meantime, the United States and allied countries have pledged to release strategic reserves of 60 million bbl. Half of that would come from the U.S. Strategic Petroleum Reserve (SPR).

Still, that would only offset lost Russian exports for a few weeks.

U.S. commercial crude inventories for the March 4 period, excluding those in the SPR, decreased by 1.9 million bbl from the previous week. At 411.6 million bbl, inventories were 13% below the five-year average.