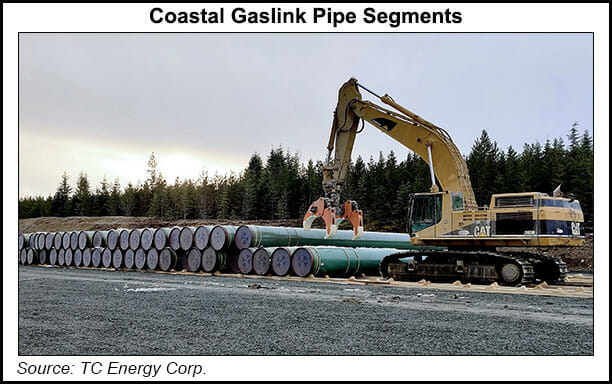 In its second quarter earnings report released last week, the Canadian midstream giant said it was in disagreement with the LNG Canada consortium over which company is responsible for increased costs and schedule delays. TC management repeated its previous concerns that project costs are to “increase significantly” from scope changes, permitting delays and impacts from the Covid-19 pandemic. It also anticipates a delay to project completion.

Executive Vice President (EVP) Tracy Robinson said discussions with the Royal Dutch Shell plc-led gas export project were continuing. During the 2Q2021 earnings call, she said TC and its Coastal GasLink partners were focused on commercial conversations “as a mechanism” to resolve the disagreement.

While the talks are confidential, Robinson said the company was focused on resolving the dispute as quickly as possible to avoid suspending key construction work. The pipeline is currently expected to be in service in 2023.

“If we’re not able to reach a resolution in the near-term, then there will be some implications to our construction,” Robinson said. She added that Coastal GasLink, which is about 50% finished, is now in “full execution” mode after Covid-19 health restrictions were lifted in April.

“We have been working hard with TC Energy to understand the reasons for the increase in cost and schedule, and we have provided recommendations on improved execution efficiency and will continue to work with TC Energy and their partners to reach a commercial solution for how increased costs must be addressed in their original plans and how they can improve schedule performance,” Zebedee said.

Progress was continuing at the plant site in Kitimat, BC, where LNG Canada received its first cryogenic heat exchanger earlier this year and is preparing to raise the roof on its first storage tank later this summer.

In the quarterly results, TC also said it was moving forward on a $700 million project to partially electrify its Columbia Gas Transmission system. The company sanctioned the VR project,  which includes installing  electric compression “that will meet growing demand and reduce emissions,” CEO François Poirier said. “This is another great example of our vast network playing an important role in the transition to a lower carbon world by delivering natural gas that will be used to displace coal-fired power and provide a backstop to the intermittency of renewables.”

EVP Stan Chapman said the project would allow TC to reduce its emissions footprint while increasing throughput to customers. He also noted the project is part of the company’s overall emissions reduction drive and could be among the first for electrification developments on its U.S. pipelines.

“The dollar amount is going to fluctuate, depending upon the specifics of the case,” Chapman said on the call. “But I think the expectation would be one or two projects per year over the next several years. Now, what pipeline that’s on is going to be determinative of many things, including where the additional loans are going to come from, where we have the best opportunity to add electric compression with respect to proximity to poles and wires and the like.”

TC has also boosted its outlook for renewable natural gas (RNG). The company expected to double the amount of RNG it takes into its system to 4 Bcf from 2 Bcf this year, and doubling it again to 8 Bcf next year. Chapman said the system is now on track to take 30 Bcf by early 2023.

On the renewables front, TC is evaluating responses received through a request for information (RFI) launched in the second quarter. The company is seeking potential contracts or investments in up to 620 MW of wind energy projects, 300 MW of solar projects and 100 MW of energy storage projects to “meet the electricity needs of a portion of our U.S. pipeline assets.”

“Our results are underpinned by strong demand for our services together with a constant focus on operational excellence,” TC management said. “Flows and utilization levels across our network continue to be in line with historical norms despite the ongoing impacts of Covid-19, extreme weather events and energy market volatility.”