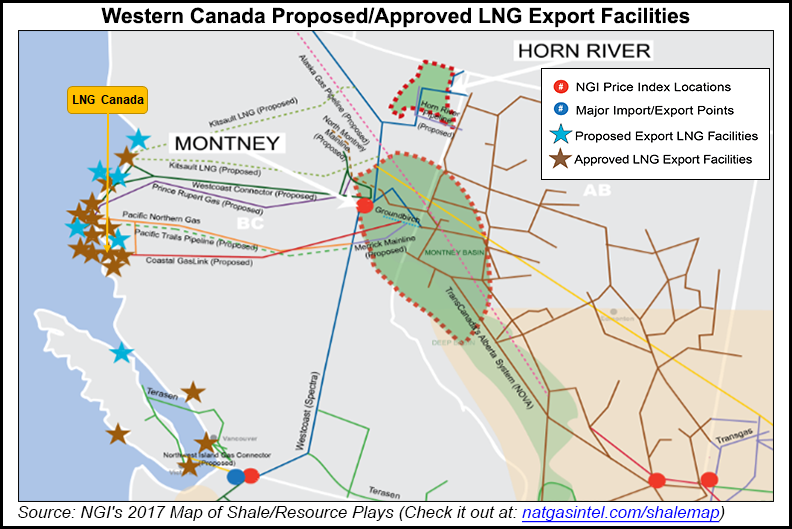 “Time is of the essence,” said TC subsidiary Nova Gas Transmission Ltd. (NGTL) in a request for swift approval by the Canada Energy Regulator (CER) of a delivery bargain with LNG Canada partner Petronas Canada Ltd.

NGTL seeks approval by Dec. 31 to a “competitive alternative” devised after Enbridge’s BC Westcoast network won a Petronas contract to transport 510 MMcf/d for the first of two LNG Canada terminal phases.

Phase one is under construction at Kitimat, along with the terminal’s Coastal GasLink (CGL) supply conduit across 670 kilometers (416 miles) of BC from the Montney shale region where Petronas and other LNG Canada partners are developing production. NGTL and Westcoast both span the Montney to the CGL route.

NGTL’s deal, also for 510 MMcf/d, would serve the second export project phase. LNG Canada has a 40-year CER license for annual exports of up to 26 million metric tons, or 3.4 Bcf/d. About half the total shipments are scheduled to begin in 2024.

No date has been set to build the second project phase. But NGTL told the CER that Petronas can cancel its contract if approval is not completed by the end of January 2022. The LNG Canada partners are developing their own Montney pipelines.

Although the deal with Petronas includes discounts off tolls for NGTL’s current Alberta and BC supply collection network, and despite the expense of adding facilities, the new traffic in LNG export-bound gas is projected to be profitable.

NGTL forecasts net revenue, after service costs, of C$339 million ($271 million) from the first 25 years of its LNG project phase two contract. The predicted NGTL total jumps to C$682 million ($546 million) if Petronas renews its deal for the full 40-year term of the Canadian export license.