Australia-based LNG Ltd. (LNGL), which is developing export terminals for the Gulf Coast and Canada, said Friday that its takeover by a private company in Singapore is likely to take longer because of problems created by the coronavirus outbreak. 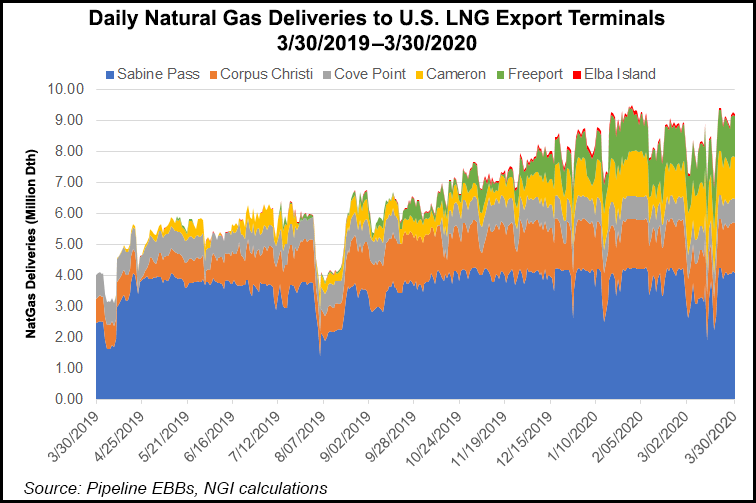 The company said LNG9 Pte. Ltd.’s statement outlining its offer won’t be filed with the Australian Securities and Investments Commission until mid-April. It would be sent to shareholders in late April, the company said. Those steps were previously expected to be completed in March at the earliest.

“The delay from the indicative timeline in the bid implementation agreement is principally due to challenges from and the unavailability of relevant personnel as a result of the global impact of Covid-19,” LNGL said.

Citing “intense” competition in the race to export liquefied natural gas (LNG) and an urgent need to secure liquidity, LNGL said in February that it was considering LNG9’s takeover offer. The Singapore-based company owns and operates offshore regasification facilities in Asia and Europe.

Under the bid agreement, shareholders would receive 13 cents/share (or the Australian dollar equivalent) in cash, valuing LNGL capital at around $75 million. The offer represents a 72% premium to the share closing price on the Australian Securities Exchange on February 27, the trading day before the announcement.

“LNGL has over the last year evaluated many potential corporate and asset transactions to provide liquidity and value for shareholders and considers that the LNG9 offer is the most attractive offer currently available for LNGL shareholders,” CEO Greg Vesey said at the time the takeover was publicly revealed.

LNGL said again Friday that its leadership is unanimously recommending the takeover offer.

In the meantime, LNG9 has indicated that it would arrange for new sources of funding for LNGL through at least the end of the offer period, which at the earliest could close May 28, according to the new timeline issued Friday. LNGL’s current lender has terminated financing, the company said Friday, adding that it has enough funds to meet commitments through late April.

LNGL is working to get projects off the ground while the global market is awash in supply and buyers are unwilling to sign long-term supply deals. Despite having all permits in hand, securing binding offtake agreements has been a struggle for the proposed Magnolia LNG terminal near Lake Charles, LA, and the Bear Head LNG facility in Nova Scotia.

The macro environment, and now impacts of the coronavirus, continue to weigh on the global gas trade. Australia’s Woodside Petroleum, the country’s largest gas exporter, announced Friday that it would cut 2020 capital expenditures by 50% given the headwinds. Woodside said it would delay final investment decisions (FID) for the Scarborough and Browse gas fields, along with an expansion of its Pluto LNG facility.

In the United States, Tellurian Inc. recently received a lifeline, announcing that the maturity on its 2019 term loan has been extended by 18 months. It had been due in May. Feeling the squeeze of a global gas glut and the coronavirus’ impacts, the company in early March highlighted plans to cut corporate spending, reshuffle management and reduce its workforce as it works toward sanctioning the massive Driftwood LNG terminal in Louisiana.

Other projects across the world, including LNG Canada, Woodfibre LNG and Rovuma LNG, to name a few, have been impacted by workforce issues, delays in receiving equipment for construction or possible FID deferrals because of the coronavirus.