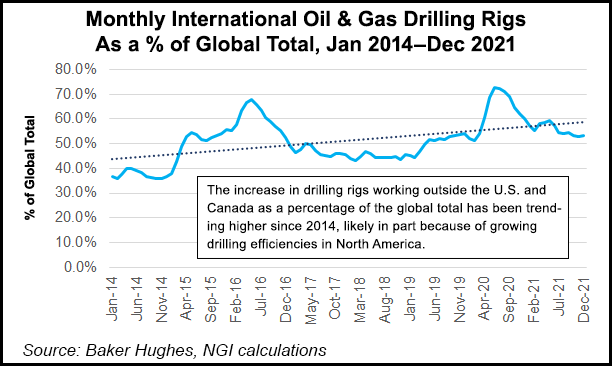 The largest oilfield services (OFS) company in the world unveiled its strong fourth quarter results, with Le Peuch detailing the outlook and outlook for 2022 during a conference call.

“The macro environment is increasingly supportive of a potential supercycle,” with market growth extending “both onshore and offshore well beyond 2022,” Le Peuch told investors during the call.

The company has “increased confidence in our view of robust, multi-year market growth, tight oil supply, and demand growth beyond the pre-pandemic peak.” Shrinking spare capacity and supportive commodity prices should “result in a substantial step-up in capital spending” by exploration and production (E&P) customers.

Schlumberger expects oil demand to exceed pre-pandemic levels by the end of 2022, with growth in 2023 and beyond.

“Long-cycle developments,” such as in the offshore, where projects can take years, are likely to augment capital expenditure (capex) growth by the E&P sector, too.

“Turning to 2022 more specifically, we expect an increase in capex of at least 20% in North America, impacting both the onshore and offshore markets, while internationally, capital spending is projected to increase in the low to mid teens.”

Le Peuch said the year should unfold beginning in April, with a “strong seasonal uptick” in 2Q2022 “across all divisions.”

The positive market conditions, said Le Peuch, “are strikingly similar to those experienced during the last industry supercycle, suggesting that resurgent global demand-led capital spending will result in an exceptional multi-year growth cycle.”

The previous oil and growth cycle began in 2009, as North American land activity took off as unconventional oil and gas production accelerated. The growth continued into 2014.

Schlumberger, considered a digital and technology leader, “is well prepared to fully seize this growth ahead of us,” said Le Peuch. “We have entered this cycle in a position of strength, having reset our operating leverage, expanded peer-leading margins across multiple quarters, and aligned our technology and business portfolio with the new industry imperatives.”
Last year was one in which the company strengthened its core portfolio and expanded its sustainable energy portfolio. Now a return to growth across the board has begun, Le Peuch said.

Why Is Le Peuch So Confident?

Asked why he had confidence in growth this year, Le Peuch said it comes in part from the strong performance in 2021.

“I think the market mix…is set to improve,” tilted to offshore markets, one of Schlumberger’s specialties. “We expect this to only accelerate as the year unfolds…

“The adoption of technology also is accelerating, as you have seen, including digital,” with customers looking to install more technology for the energy transition.

The Well Performance growth further accelerated in the final three months of 2021, with revenue up 8% sequentially to $1.3 billion. The gains were primarily attributed to higher intervention and stimulation activity in the international offshore markets.

Well construction revenue of $2.4 billion increased 5% sequentially because of higher land and offshore drilling, both in North America and internationally. Margins of 15.4% were essentially flat from 3Q2021, as increased activity and pricing gains were offset by seasonal effects.

Production Systems revenue in 4Q2021 rose 5% sequentially to $1.8 billion, on the support of new offshore projects. However, margins decreased 85 bps to 9% “largely as a result of the impact of delayed deliveries due to global supply and logistic constraints.”