Southwestern Energy Co. agreed to acquire Montage Resources Corp. in an all-stock deal that would create the third largest oil and natural gas producer in the Appalachian Basin, with 3 Bcfe/d of combined production. 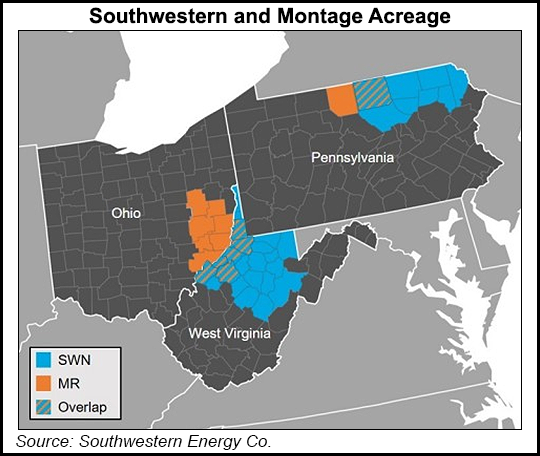 The deal is valued at $857 million, including debt, according to Raymond James & Associates Inc. It would give the Houston-based independent another 324,500 acres and entry into Ohio, where Montage assets are to the north of Southwestern properties in West Virginia. Southwestern would also gain a footprint in Tioga County, PA, which is west of other acreage it has in the northeastern part of the state. The combined company would hold more than 786,000 net acres spread across Ohio, Pennsylvania and West Virginia.

“This acquisition is expected to deliver on all criteria of an accretive, value-adding transaction for the shareholders of both Southwestern Energy and Montage Resources,” Southwestern CEO Bill Way said. Montage CEO John Reinhart said the “combination creates a company of substantial scale with capabilities to enhance cash flow generation and a strong balance sheet.”

Southwestern expects the merger to generate $100 million of free cash flow per year beginning next year, along with $30 million of annual general and administrative savings.

Southwestern divested its long-time assets in the Fayetteville Shale in 2018 as part of a broader effort to cut costs and became an Appalachian pure-play. Meanwhile, Montage was born of a merger between Eclipse Resources Corp. and Blue Ridge Mountain Resources Inc. (formerly Magnum Hunter Resources Corp.) that was completed last year.

Analysts at Tudor, Pickering, Holt & Co. noted that the acquisition “highlights the industry’s emphasis on low-to-no premium combinations” in an era of sustained low commodity prices.

Under the terms of the agreement, for each Montage share, its stockholders would receive 1.8656 shares of Southwestern, based on the three-day average prices of the companies as of Tuesday (Aug. 11). The deal is expected to be completed by year’s end. To help fund the deal and retire a portion of Montage senior notes due in 2023, Southwestern plans to issue 55 million shares of common stock.