Southwestern Energy Co., which has proved time and again that making money is possible in some of the onshore natural gas plays, on Monday cut a bargain deal that will nearly double its gassy acreage position in the Marcellus Shale of Pennsylvania. 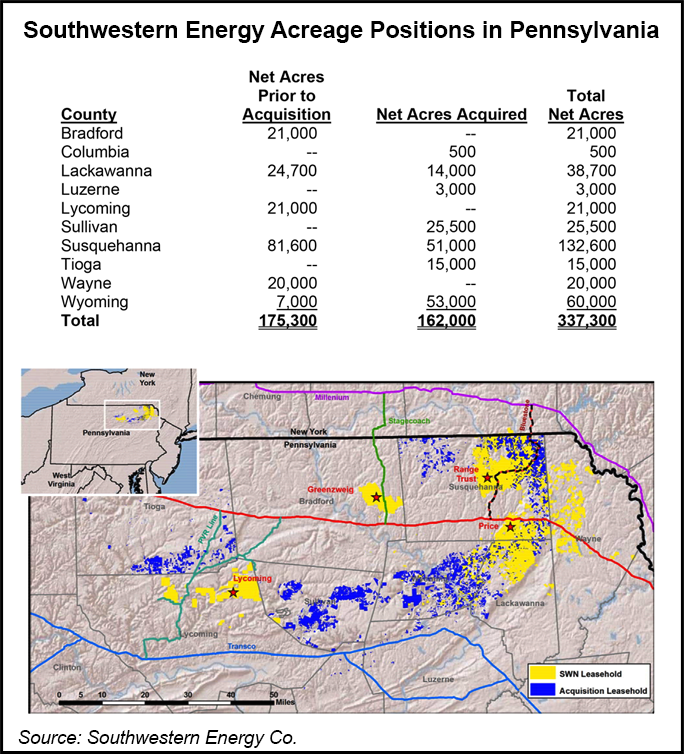 The Houston operator, which now has about 175,300 net acres in the play, agreed to pay $93 million to Chesapeake Energy Corp. and its partners to buy a string of leaseholds that together equal 162,000 net acres. The transaction works out to about $547/acre, a sale price considering that some acreage in the region has sold for more than $10,000/acre in the past.

“2013 is already proving to be an exciting year for Southwestern Energy,” said CEO Steve Mueller. “This acquisition…is near our existing position and provides Southwestern with even greater exposure to a world-class resource where we can further showcase our operational strengths.”

The “key” acreage being acquired, said the CEO, is in Susquehanna, Wyoming, Tioga and Sullivan counties. Current net production is about 2 MMcf/d from 17 wells; 1.2 net wells to Southwestern.

Once the transaction is completed in mid-May, “our acreage position of approximately 337,000 net acres in the Marcellus strengthens our ability to provide future double-digit production and reserve growth.”

The transaction may be a bargain, but Chesapeake did not have the land sold held by production, and a nearing deadline might have required the producer to relinquish the land and in effect, receiving nothing for its efforts to date.

Chesapeake also is attempting to sell up to $12 billion of its assets this year to repair its balance sheet. Sterne Agee analyst Tim Rezvan said the low sales price “demonstrates Chesapeake’s urgency in selling assets without substantial associated cash flow.”