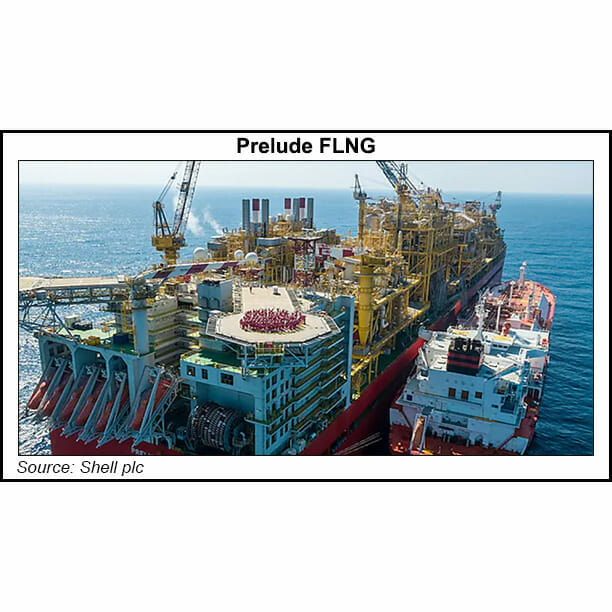 The Offshore Alliance union told Shell that workers planned to ban mooring tankers alongside the FLNG facility, preventing the producer from unloading LNG and liquefied petroleum gas (LPG) from the facility. The dispute began in early June with Offshore Alliance, a partnership between the Australian Workers Union and the Maritime Union of Australia. A three-day vote by the Alliance began earlier this month, but nearly 95% rejected Shell’s offer.

Prelude customers were informed by Shell on Monday (July 11) that no cargoes would be supplied until at least July 21.

‘Nothing On The Line Up For This Week’

Shell managed to export one cargo from Prelude over the weekend, Kpler LNG analyst Laura Page told NGI. “The Pan Europe loaded on July 7 and is heading toward Asia, according to Kpler data,” Page said. “The cargo before that was the Oceanic Breeze on June 28, which is due to unload in Japan on July 16…

“We have nothing on the line up for this week,” Page said, “but the Symphonic Breeze is declaring for…arrival” next weekend (July 17-18). “If the story is true that there are no loadings until July 21, we could see that vessel divert or hang offshore for a few days.”

Page said if the strike causes loadings to cease, “we will see the loss of one cargo per week. Shell is the offtaker at Prelude, so it will mean they will need to cover their positions with alternative sources of supply, which could tighten the market balance somewhat.”

Closing Prelude comes as global LNG is squeezed by Russia’s reduced deliveries to Europe. The Nord Stream 1 (NS1) pipeline has started its annual 10-day maintenance amid uncertainty over whether Russia’s Gazprom PJSC will return the pipeline to full capacity on July 21 as scheduled. Some analysts are concerned that Russia may not ramp up NS1 when maintenance is completed. A fire last month at the Freeport LNG export terminal in Texas has cut about 2 Bcf/d from deliveries.

“Prelude is one cargo every week and Freeport LNG is four cargoes a week so together this is quite significant,” lead consultant David Hewitt of Hewitt Energy Perspectives told NGI.

“Prelude delivers LNG to Jera, Korea Gas Corp, CPC Corp. Shizuoka Gas Co. Ltd. and Shell as offtakers,’ Hewitt said. “But the real question is will Asian buyers participate in the spot market as the gas risk continues to increase in Europe.”

“This situation is typical of a long history of inept management at Shell’s Prelude facility,”  he said. “This situation could actually be resolved very easily if management simply drops its strange, hyper-aggressive industrial reactions tactics.”

Prelude has been beset by problems since it shipped its first cargo in 2019. Shell temporarily suspended production between December and April. Prelude also was offline for 11 months, from February 2020 to January 2021 because of technical issues.