Royal Dutch Shell plc’s second quarter profits plunged from a year ago to their lowest level in 11 years, slammed by lower commodity prices, weak refining margins and stumbling production. And the outlook for liquefied natural gas (LNG), considered a primary motivation to merge with BG Group plc, is so poor that the Lake Charles, LA export project has been tabled — the second North American project canned this month. 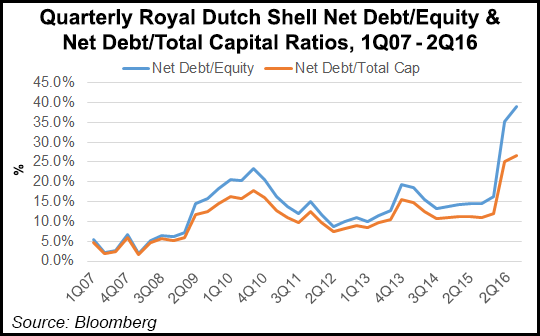 Shell’s debt-to-equity ratio (gearing) climbed to 28.1% from 12.7% a year ago, which means debt is mounting at a rapid pace. The company’s self-imposed ceiling is 30%.

CEO Ben van Beurden, who shared a microphone with CFO Simon Henry on Thursday for more than an hour, blamed the losses on a perfect storm of financial problems.

“Lower oil prices continue to be a significant challenge across the business, particularly in the upstream,” van Beurden said. Oil prices averaged $39.59/bbl in the quarter, versus $55.84 in the year-ago period. Shell loses or gains about $5 billion with every $10/bbl move in Brent crude, he said.

The company also spent more than anticipated on corporate costs, with about $250 million for redundancy and restructuring from the BG merger (see Daily GPI, April 8, 2015). The restructuring has led Shell to lay off close to 12,500 people since last year, including 25% of its Gulf of Mexico workforce this month.

Plans remain to divest $30 billion of assets over the coming years. The prized dividend was maintained — but it will be paid through asset sales and reduced investments. At current oil prices of $43-43.50/bbl, Shell has to raise cash by selling assets, Henry said.

“In the next six to 12 months the biggest driver of the gearing level will be the divestments and the oil price,” the CFO told analysts. Expectations are to sell $6-8 billion of properties this year. Shell also has completed or is nearly complete in the sale of $3 billion of properties. It also is in discussions to sell 17 more assets, he added.

Projects that don’t make economic sense are off the table, said the CEO. The final investment decision (FID) for LNG Canada, designed to export up to 3.2 Bcf/d from a port near Kitimat, BC, was canceled by Shell and its Asian partners earlier this month (see Daily GPI, July 12). Concerns about the viability of the the Lake Charles Liquefaction Project, with Shell responsible for the offtake, were raised in May (see Daily GPI, May 4). On Thursday, van Beurden made it official: Lake Charles is tabled.

The FID delay is “not necessarily a cooling of our interest in the market,” he told analysts. “Although you have to bear in mind we have repositioned our integrated gas business from growth to a cash engine,” a strategy he detailed this past spring. For now, the priority is “free cash flow optimization. The general appetite for new FIDs has been seriously reduced, of course, as we have changed our strategic intentions. It’s also fair to say that at the moment, there’s quite a bit of length in the market” for LNG.

The world is “well supplied, and we have uncommitted volumes. Some we buy, some we place ourselves, but we see the market getting tighter again probably only in the early part of the next decade.”

Natural gas still remains the “fastest growing fossil fuel source” in the world. “We will remain interested in taking investment decisions…but probably not in the near-term until we see the market develop and indeed, see the demand uptick and the supply-demand bridge opening up more…”

The “prime reason for not taking the FID on both Canada and Lake Charles is driven by affordability reasons this year…We have not stated when we will revisit this decision, and we have no new date to look forward to.” Van Beurden said “multiple ways” exist for Shell to move forward with Lake Charles. However, “my mind goes back to fundamentals. We don’t feel at this point in the cycle, in our financial framework, that it is prudent to make that level of commitment to the LNG business.”

This year is a “transition year for us,” the CEO said. “The overwhelming driver is the macro environment.”

With the takeover of BG completed, Shell’s production in 2Q2016 rose by 28% from a year ago to 3.51 million boe/d. BG, by itself one of the biggest LNG operators in the world, helped Shell’s sales volumes jump by 52% to 14.25 million metric tons.