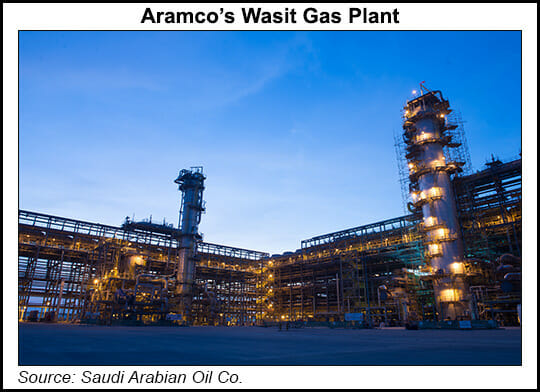 Energy Minister Abdulaziz bin Salman Al Saud called the discoveries an important part of “increasing the kingdom’s natural gas reserves” and helping Saudi Arabia “realize the objectives of the Liquid Fuel Displacement Program.” Aramco is invested in global LNG projects and the petrochemical sector, but its gas development activities in Saudi Arabia have been focused on decreasing the use of oil in its power sector.

The kingdom’s press agency disclosed that the two unconventional fields were discovered in the eastern part of the country in the same region as the Ghawar oil field. One, dubbed the Awtad field, has reportedly flowed gas from two different wells at around 10 MMcf/d and 16.9 MMcf/d, respectively. Another field, called Al Dahna, has flowed gas from two wells at rates of 8.1 MMcf/d and 17.5 MMcf/d.

Aramco has also been developing a gas expansion program, creating processing infrastructure and developing more long-term resources. It is in the early construction and design phase of the Jafurah Gas plant, a 3.1 Bcf/d capacity facility estimated to be completed in 2027.

The plant would process gas from the developing Jafuraf field Aramco is aiming to bring into production sometime in 2025. Deliveries from the field could increase the firm’s domestic production rate to 2 Bcf/d by 2030, which the company reported would help it feed hydrogen and ammonia production for local power demand.

In August, Aramco said it had reached the advanced stages of construction on the Hawiyah Unayzah Gas Reservoir Storage facility. The project is planned to be the first underground gas storage facility in Saudi Arabia, providing a maximum of 2 Bcf/d of injection capacity for the country’s system by 2024.