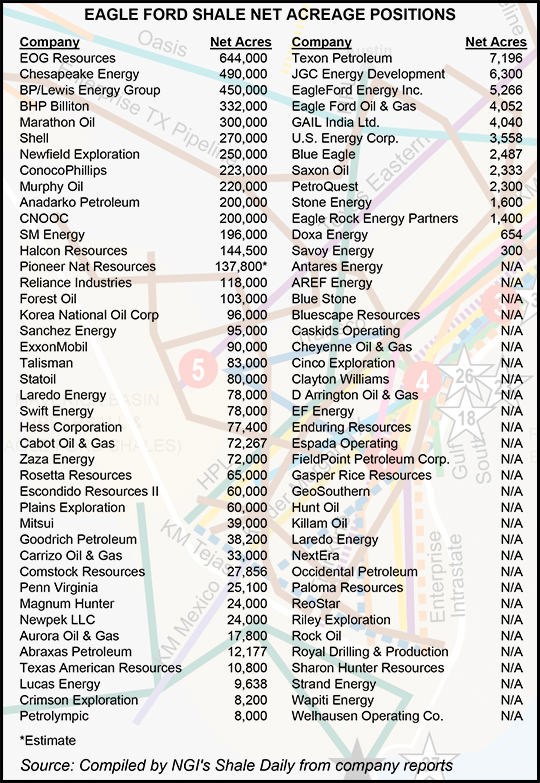 The wells were completed in southern Fayette County, TX, within the company’s Marquis project area. Here Sanchez has about 51,000 net acres in its Fayette and Lavaca counties.

“We believe that the impact of our latest Marquis wells is significant as we have approximately 51,000 net acres with 100% working interest and thus a substantial amount of running room in this area,” said Sanchez CEO Tony Sanchez III. “Based upon the performance from these wells, where the Prost No. 1H was completed with 14 frack stages and the Prost No. 2H was completed with 17 frack stages, we anticipate that subsequent wells will be completed with longer laterals and more stages, resulting in higher flow rates and [estimated ultimate recoveries] as we optimize our drilling and completion practices. That trend, combined with recent developments of downspacing across the Eagle Ford play, reinforces the growth we expect to be delivered as we continue to execute our drilling program.”

Within its core Marquis area, Sanchez estimates there are 420-630 future drilling locations, assuming spacing of 120-80 acres. It said the locations in the Marquis area represent net resource potential of 140-210 million boe from the Eagle Ford. The area is also prospective for the Austin Chalk, Pearsall Shale and Buda Limestone, according to the company. Currently drilling in the Marquis area is the Sante No. 1H. After this well is completed, the rig is expected to move back to the Prost area, where the company estimates it has up to 32 additional development locations. In the Prost area Sanchez is planning on constructing central production and gas gathering lines to expand development.

In its Maverick area of the Eagle Ford, Sanchez has 28,500 net acres and estimates that it has 235-350 future drilling locations with an estimated 60-90 million boe of net resource potential.

Eagle Ford drilling is up 19% from a year ago, according to NGI’s Shale Daily Unconventional Rig Count. As of Aug. 24 there were 237 rigs active in the play, up from 200 one year ago.

Across its entire 95,000 net acre position in the Eagle Ford, Sanchez said it has has 800-1,200 future drilling locations targeting Eagle Ford estimated net resource potential of 245-365 million boe. In July the company said it had reached a ‘turning point’ in the Eagle Ford and that its proved reserves grew by 125% to 15 million boe during the first half of 2012, up from 6.7 million boe at the end of last year (see Shale Daily, July 20).