Russian LNG exports to Europe are on the rise despite the continent’s efforts to diversify natural gas supplies and impose a series of sanctions against the country for its war in Ukraine. 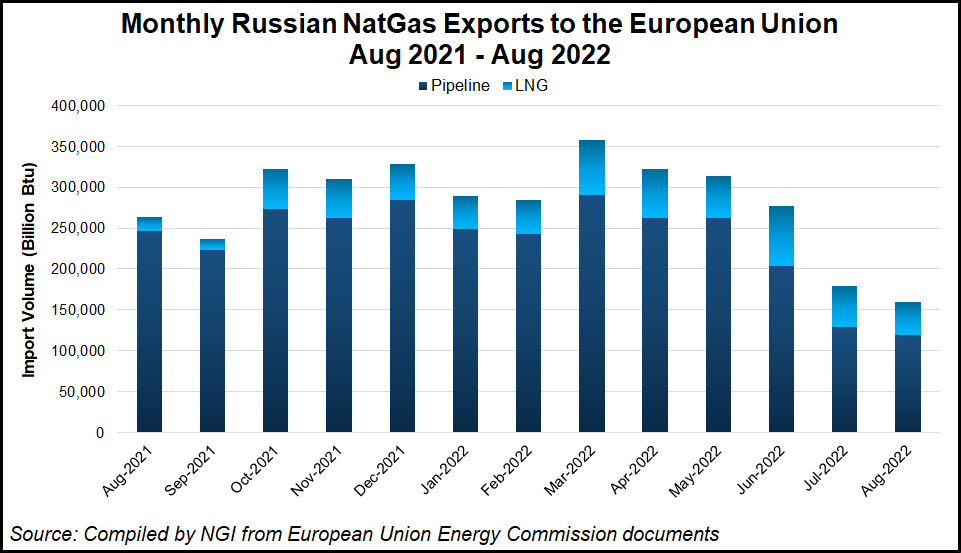 Most of the liquefied natural gas exported from Russia to Europe has been sourced from PAO Novatek’s Yamal LNG facility in the country’s Far North. Novatek is Russia’s largest independent natural gas producer, second only to state-owned Gazprom PJSC.

“Russian LNG exports to Europe appear to be under the radar; not only have they not stopped flowing, but they have actually increased,” Columbia University’s Center on Global Energy Policy (CGEP) wrote in a September report.

As Russian pipeline deliveries to Europe fell this year, Europe turned to Russian LNG imports to help fill the gas supply shortfall. The continent has not implemented any sanctions aimed at limiting imports of the super-chilled fuel from Russia.

Russian LNG imports to Europe reached 13.2 million tons (Mt) through October, compared to 10.9 Mt during the same time last year, according to data from Kpler. Belgium, France, Netherlands and France were the top importers of Russian LNG.

“Given Russian LNG is 15% of Europe’s LNG supply (January to October) this year, it will need to continue largely unchanged into 2023 if Europe is hoping to survive the 2023-2024 winter,” Rystad Energy’s LNG analyst Kaushal Ramesh told NGI. “As the world’s fourth largest LNG exporter representing 7.5% of global supply, Russia has a lot of muscle when it comes to LNG.”

Lithuania halted Russian LNG imports in March, and the United Kingdom (UK) hasn’t imported Russian LNG since February. The UK will introduce a  full or partial ban on Russian fossil fuels by the end of the year.

Russia plans to continue with its strategy to increase LNG export capacity to between 80 and 140 million metric tons/year (mmty) by 2035. It currently produces 35 mmty of capacity from four LNG facilities, which include the Sakhalin-2, Yamal, Vysotsk and Portovaya export terminals. The nation is the world’s fourth largest LNG exporter.

Novatek’s four-train Yamal LNG plant is expected to produce around 21 mmty by the end of the year versus 19.6 mmty in 2021, CEO Leonid Mikhelson said. Despite Western sanctions that have delayed the construction and financing needed to complete the 19.8 mmty Arctic LNG 2 facility, Novatek expects the project to start up by late 2023.

The company said last month it would resume financing Arctic LNG in 1Q2023. Novatek recently turned to the Middle East for financing, reportedly looking for funds in the United Arab Emirates.

As Europe decreases its gas dependence on Russia, Moscow is counting on Asian buyers for additional gas revenues. Novatek expects to achieve a final investment decision on the 5 mmty Obsky LNG in West Siberia’s Yamal Peninsula in 2023. Obsky LNG production is expected to be exported to international markets.

China increased Russian LNG imports by 13% in the first eight months of this year compared to the same period in 2022.  Russian LNG previously sold at substantial discounts in Asia, but cargoes are now selling close to spot market price levels, as the “sanctions-risk discount” has been eroded, Ramesh said.

“For now, Gazprom, Novatek, and the Kremlin seem to have scored a geopolitical win by keeping revenues from global LNG sales intact,” CGEP stated.