Russia on Wednesday shut down the massive Nord Stream 1 (NS1) pipeline serving Europe for another three days of maintenance, once again raising fears that flows won’t resume when work ends. 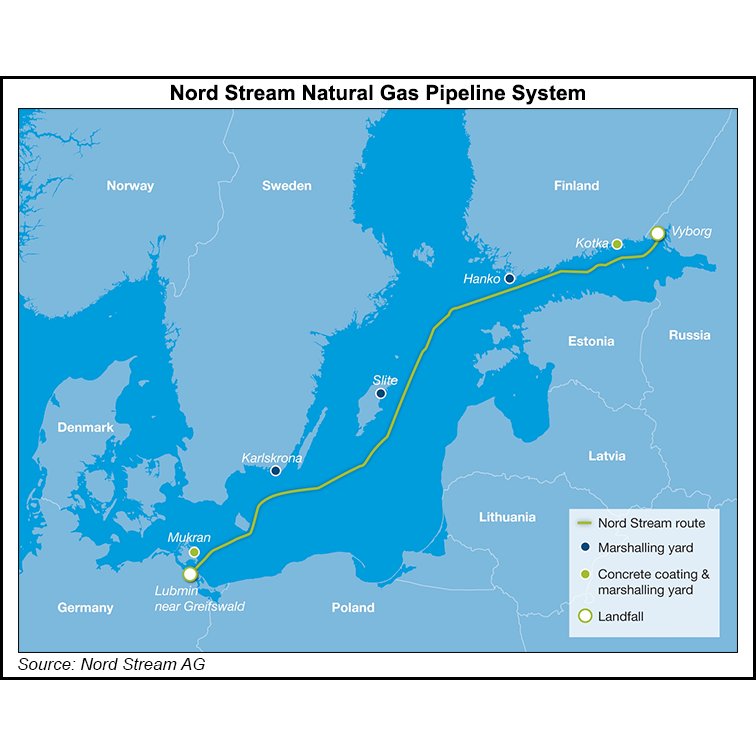 Nominations on NS1 fell to zero early Wednesday, according to the operator. Deliveries on the 6 Bcf/d, 745-mile system that stretches from Russia to Germany have been cut to 20% of capacity since July.

Gazprom PJSC has claimed that issues caused by sanctions against Russia have prevented key equipment to boost supplies from reaching the country. Flows resumed earlier this summer after a 10-day stretch of maintenance that put the market on edge. The latest work on the system’s only operating turbine is scheduled to end Saturday.

“There is a guarantee that, apart from technological problems caused by sanctions, nothing interferes” with flows resuming, said Kremlin spokesman Dmitry Peskov on Tuesday.

European natural gas prices have plunged by 30% since Friday’s high of more than $100/MMBtu.

“European gas prices this week recorded their biggest drop since April as healthy storage levels in Germany and the rest of the continent in part soothed supply concerns over maintenance on the NS1 gas pipeline from Russia – although a risk remains that flows may not return on schedule,” said Rystad Energy analyst Wei Xiong.

In a foreboding signal Wednesday, Gazprom said it would completely suspend natural gas deliveries to France’s Engie SA for failure to pay for July shipments. The company said Engie did not properly comply with a Kremlin mandate earlier this year requiring payment in rubles. Engie acknowledged Tuesday that deliveries had already been cut.

The utility is one of France’s largest gas suppliers, but Russian volumes now account for less than 4% of its gas imports.

“As previously announced, Engie had already secured the volumes necessary to meet its commitments towards its customers and its own requirements, and put in place several measures to significantly reduce any direct financial and physical impacts that could result from an interruption to gas supplies by Gazprom,” the company said Tuesday.

While fresh data on Wednesday showed economic contraction and energy demand destruction on the continent amid sky high prices, robust storage injections are providing a cushion for now.

Strong LNG deliveries and Norwegian supplies have helped storage injections stay ahead of schedule, but a complete Russian gas cut or severe cold this winter could mean gas rationing for Europe. Klaus Mueller, president of Germany’s Federal Network Agency, which regulates the gas market, reportedly told a German newspaper last week that the country would have to cut gas consumption by 20% to help make it through the winter. Europe is aiming to reduce consumption by 15% through next spring.