Rex Energy Corp. said it is “pleased” with the results so far from a well targeting Ohio’s Utica Shale, but it is disappointed with a third-party well completion technique at a second well and blamed bad weather for delays in putting other wells into sales. 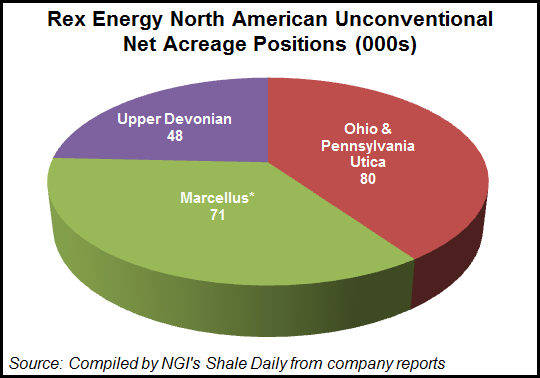 Rex said the G. Graham #1H well produced with an average casing pressure of 2,364 psi during the initial five-day sales period, and 1,672 psi during the average 30-day sales period on a 24/64 inch choke. The well was drilled to a total measured depth of 12,098 feet with a lateral length of approximately 3,973 feet and was completed in 27 stages using Rex’s “Super Frac” completion technique. Based on composition analysis, gas produced from the well is approximately 1,262 BTU.

“We are pleased with the results of the G. Graham #1H, our second announced well in our Warrior North Prospect,” said Rex CEO Tom Stabley, adding that initial sales there are believed to be “among the best results in Carroll County to date.”

According to a corporate presentation from April 30, Rex’s Warrior North prospect encompasses about 16,100 gross (15,900 net) acres in Carroll County. Stabley said Friday that there were more than 110 drilling locations in Warrior North, and said the results so far at G. Graham #1H “further demonstrates the potential value of our acreage position.”

Rex said a second well in Carroll County, G. Graham #2H, was drilled to a total measured depth of 11,776 feet with a lateral length of approximately 3,572 feet and was completed in 24 stages. The well was completed using an undisclosed proprietary third party completion technique, which the company said had fared below its expectations.

During 2Q2013, the company completed two wells at its Brace West pad using “Super Frac,” with an average lateral length of approximately 4,400 feet. Rex expects the two Brace West wells to be placed into sales in early July 2013.

In the Warrior South Prospect, located in Ohio’s Noble, Guernsey and Belmont counties, Rex holds about 6,700 gross (4,100 net) acres, according to the April 30 presentation.

Rex said Friday that it had recently placed its first three Warrior South wells into sales, but “encountered additional delays in placing these wells into sales primarily due to inclement weather, which delayed pipeline construction by the third party midstream provider.” Rex said it would provide sales rate details in the near future.

According to Rex, a fourth Warrior South well — the fourth for the five-well J. Anderson pad — is currently being drilled. All five wells on the J. Anderson pad are expected to be drilled and placed into sales by late 2013, after which the drilling rig will be moved back to the company’s Warrior North prospect for the rest of 2013.

In Butler County, PA, Rex said it has added two wells targeting the Upper Devonian/Burkett Shale to its Ballie Trust pad, where the company has already planned four wells targeting the Marcellus Shale. Laterals at the expanded pad will be stacked vertically, with an average lateral length of about 4,400 feet, the company’s longest average among all of its wells in Butler County.

According to Rex, the company will not increase its capital expenditures (capex) for 2013 because “the incremental cost from the two additional [Upper Devonian/Burkett] wells is offset by decreased drilling and completion costs from operational efficiencies in the Appalachian Basin. Because [we currently expect] these wells to be placed into service late in 2013, the company is not increasing its full year production guidance for 2013 at this time.”

“Midstream delays encountered at Warrior South could put production guidance at risk which could weigh on shares near term, though we await more clarity from the company,” Douthat said. He added that Rex “had planned on placing Warrior South wells into sales on June 1.

“To the extent that the delays in the timing of placing these wells into sales [were] not factored into guidance, we believe company could be at risk of missing targets.”