In the six years spanning 2007 through 2012, total U.S. private sector employment increased by more than one million jobs, or about 1%. However, over the same period, the oil and gas industry — segmented into drilling, extraction and support segments — increased by more than 162,000 jobs, which equates to a 40% increase,” according to a new study from the U.S. Labor Department’s Bureau of Labor Statistics (BLS). 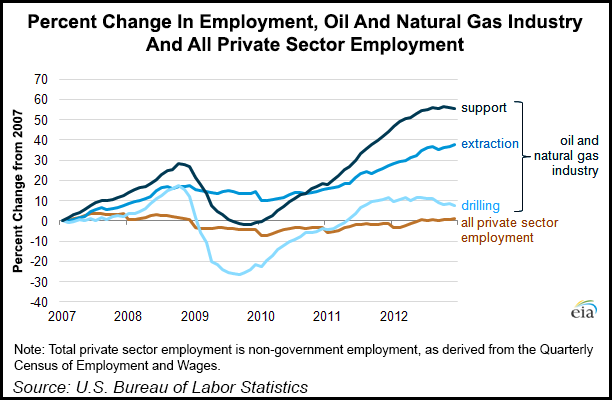 The Drilling segment involves any employment related to the spudding and drilling of wells, as well as reworking of wells. This segment accounted for more than 90,000 jobs by the end of 2012, an increase of 6,600 jobs since 2007. Extraction, which includes establishments primarily engaged in operating, developing, and producing oil and natural gas fields, including exploration and all production work up to the point of shipment from the producing property, numbered more than 193,000 jobs by the end of 2012, which is 53,000 more jobs than in 2007.

The third segment, which is support, involves performing supporting activities for oil and natural gas operations, including exploration, excavation, well surveying, casing work, and well construction. As the largest oil and gas category, support employed more than 286,000 people by the end of 2012, up more than 102,000 jobs from 2007. The BLS said the support segment does not include jobs created in other industries such as manufacturing, housing, retail, education, or food services.

The report said both the support and drilling industries were heavily affected by the recession but have recovered quickly, “suffering only minor effects from the temporary moratorium on offshore drilling” as a result of the Deepwater Horizon spill in 2010.

BLS added that the oil and gas industry activity also directly supports output and employment in other domestic sectors, such as suppliers of pipe, drilling equipment, and other drilling materials. In addition, as with other forms of economic activity, the report said there are indirect employment effects stemming from purchases made by industry and employees spending of their incomes.

Late last month it was announced that the Texas Petro Index (TPI), an indicator of upstream oil and gas activity in Texas, increased modestly but steadily during the first half of the year, bringing it a scant 1.2% from matching the peak index achieved nearly five years ago (see Daily GPI, July 30a).

“Midway through 2013, the Texas oil and gas exploration and production economy is enjoying stability at a high level of activity, modest increases in aggregate activity levels, and impressive employment growth,” said Karr Ingham, the economist who created the TPI and maintains it monthly. “The industry continues to provide fuel to statewide economic growth, and at this point all signs are pointing to a continuation of those trends through the balance of 2013.”

It was also reported last month in the U.S. Department of Interior’s Economic Report for Fiscal Year 2012 that energy produced from DOI lands in FY2012 — which included 626 million barrels of crude oil, 5 Tcf of natural gas and 460 million tons of coal — contributed $230 billion to the national economy and supported 1.2 million jobs (see Daily GPI, July 30b).