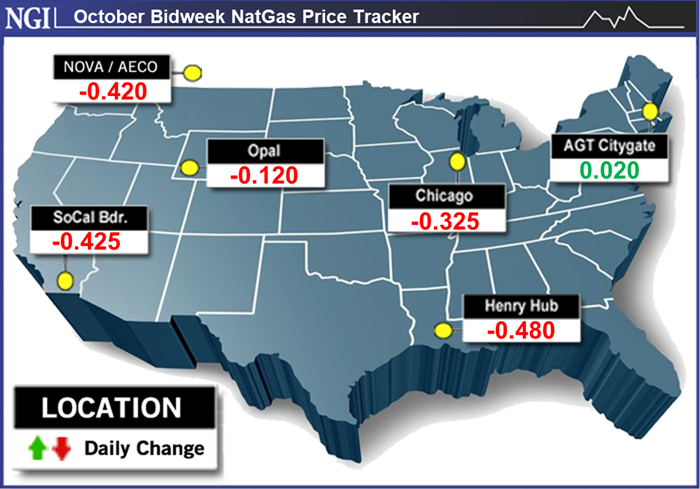 NGI’s October Bidweek National Avg. declined 33.0 cents month/month to $1.865/MMBtu and was well below the $2.005 average recorded during October 2019 bidweek.

The October Nymex natural gas futures contract rolled off the board on Monday at $2.101, down 3.8 cents day/day as weather-driven demand was forecast to fade in October and the market braced for a hefty storage injection for the week ending Sept. 25. The November contract plunged more than 26 cents over its first two days as the prompt, settling at $2.527/MMBtu on Wednesday, and the slide continued Thursday as the latest federal report confirmed robust storage levels.

The Energy Information Administration (EIA) on Thursday reported an injection of 76 Bcf into storage for the week ending Sept. 25. The result came in roughly on par with analysts’ median estimates and slightly below the five-year average of 78 Bcf.

The latest figure pointed to supply/demand tightening, some analysts said, though storage hovers around record levels and lower injections will be needed in the coming weeks to ward off surpluses.

Total working gas in storage as of Sept. 25 stood at 3,756 Bcf, according to EIA, 405 Bcf above the five-year average. The industry is on track to approach 4.0 Tcf by the end of October. At that level, containment concerns could escalate.

“It is still not enough yet to say we avoid containment issues,” Bespoke Weather services said. “There is little margin for error, should LNG see any additional hiccups.”

Fears of a lull in demand recovery following a hot summer were kindled during bidweek by October weather forecasts that called for comfortable temperatures across much of the Lower 48, possibly minimizing both cooling and heating demand for several weeks.

“All models advertise a more typical La Niña flavor to the pattern moving forward, with an upper level trough moving into the West, pushing the western warmth eastward into the central and eastern United States,” Bespoke said.

The shift may bring highs in the 60s and 70s to swaths of the country – too cool to get air conditioners cranking, yet too warm for widespread heating demand.

“This leads to well below normal demand, something we believe holds into the second half of October, and likely into November as well,” Bespoke said. “This will be very different from the last couple of years, as both prior years moved much colder once into mid-October.”

The coronavirus pandemic continues to cast a cloud over the future direction of LNG exports to Europe and Asia. Analysts anticipate stronger demand ahead of and moving into the winter months, as heating needs mount and as overseas markets adapt to the pandemic. New virus outbreaks, however, are also anticipated as people move indoors amid colder weather. More spread of the virus could interrupt economic recoveries and dampen industrial energy demand.

Prices sunk in regions that have proven volatile recently, particularly in California, where wildfires have raged and prices have fluctuated for weeks. Prices also slumped near the Gulf of Mexico, where aftershocks from recent hurricanes and tropical storms have affected both supply and demand.

Several demand hubs in the nation’s midsection and the East, where mild fall weather moved in, also lost ground in October bidweek trading.

Looking ahead, focus will remain on weather, with eyes on any notable shifts toward bullish patterns, and whether LNG can gather more momentum to bolster demand.

LNG feed gas has recently hung around 6 Bcf, well below September highs of about 8 Bcf. Volumes were hindered with the Dominion Cove Point export terminal in Maryland under maintenance and the Cameron export facility in Louisiana only beginning to ramp back up after Hurricane Laura forced it offline in late August.

In the bigger picture, however, demand from Europe and Asia is most important for a sustained LNG rebound, analysts say.

Beyond economic strength, cold overseas winters and favorable price differentials with the U.S. benchmark are the keys, analysts at Clearview Energy Partners LLC said. Currently, pricing dynamics point to increased demand from Europe, they noted, with Lower 48 LNG exports poised to rise notably in the fourth quarter and in 2021 relative to current levels.

However, the Clearview analysts said winter temperatures “can significantly impact global gas and LNG demand and prices to the upside and downside, which could in turn impact the volume of U.S. LNG exports.” As such, forecasts for LNG are moving targets.