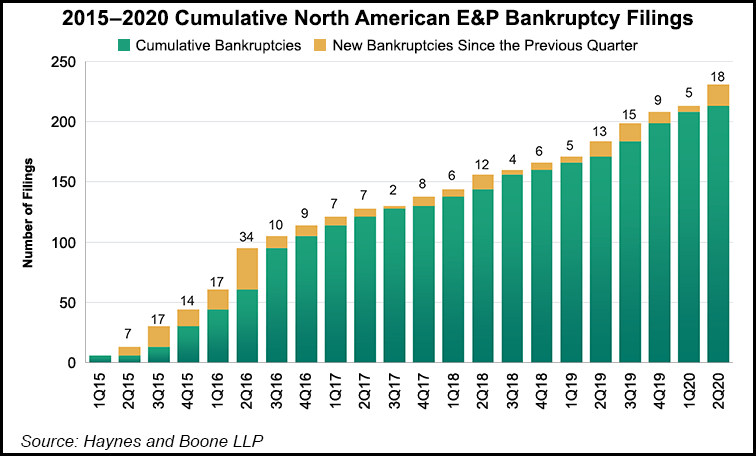 The number of North American exploration and production (E&P) companies seeking bankruptcy protection continues to rise, with 23 operators filing since the start of the year, according to Haynes and Boone LLP.

This is four more than what the law firm reported last month, and included former heavyweight Chesapeake Energy Corp. and Permian pure-play Lillis Energy Inc. In the second quarter of 2020, 18 producers filed bankruptcy, compared to only five who filed in the first quarter. Haynes and Boone has monitored North American oil and gas producer bankruptcies since 2015.

The number of filings started to trend higher last year as oil prices deteriorated from around $55-60/bbl to now around $40, including an unprecedented plunge below zero in April.

Nevertheless, current price levels are “not a sufficient clearing price for many heavily leveraged shale producers,” according to Hayne and Boone.

“The recent rebound in price is basic supply and demand economics,” the firm said.

The decrease in supply, it said, is based on the efforts of the Organization of the Petroleum Exporting Countries and its allies (aka OPEC-plus) to reign in production, and in the United States, “Adam Smith’s invisible hand prompting producers to shut in some production and delay drilling and completing wells.”

Demand has increased “some,” according to Haynes and Boone, due to global economic activity as countries open for business in hopes the coronavirus pandemic can be staunched. However, the recent resurgence of confirmed Covid-19 cases in the Lower 48 and abroad would indicate that any near-term sustained demand growth is unlikely.

“Until full economic activity returns and consumer confidence that the worst of the pandemic is behind us, demand levels will not pull up prices,” said Haynes and Boone. “‘Lower for longer’ remains the watchword for producers and their creditors.”

Furthermore, it is “reasonable to expect” that a substantial number of producers would continue to seek protection from creditors in bankruptcy, even if oil prices recover over the next few months, the firm said.

However, a second wave of the pandemic has been a downside factor for a long time and was not properly priced in, with the market needing a “deep shock” to acknowledge, according to Rystad Energy analysts.

After seeing a new wave of Covid-19 cases, oil-hungry California, Texas, Florida and other U.S. southern states have reversed easing of social distancing measures. Traffic patterns that were continuously improving over the last two months have now stalled, and Rystad is now seeing reduced traffic and gasoline demand throughout the southern states and the Midcontinent.

“Another surge in Covid-19 cases and lockdowns would be devastating to oil market recovery models everywhere, including ours,” said the Rystad team, led by oil markets analyst Louise Dickson.

In the firm’s base case liquids supply/demand balance forecast, the oil market should reach “near-perfect” parity in July and then stumble its way through a choppy recovery in 2020.

“A second wave of the extremely deadly respiratory pathogen Covid-19 would flip the oil market back into the chaos in April and May, albeit the chaos would be more managed and smaller in scale,” said Dickson.

At present, Rystad said producers are supplying the exact amount of oil products the market needs. “But after July, things could get messy.”

Although analysts have been able to model what a second-wave scenario would do to demand, supply is more of a wild card.

OPEC-plus plans to taper down production quotas starting August, but the rest of the world isn’t on a quota regime, Rystad pointed out. And with both Brent and West Texas Intermediate crude prices above $40, many operators, especially in North American shale, are eager to get wells back on production.

Noble Energy Inc. on Thursday joined a growing list of E&Ps indicating they would start returning previously curtailed production. Noble, whose vast U.S. portfolio extends across Texas and Colorado, said of the 11,000 b/d it curtailed in the second quarter, the majority of those volumes would return to sales by the end of July.

Rystad noted the stability of oil prices despite the reactivation of shut-in production across the country, as well as large supply swings from OPEC-plus cuts and compliance and the uncertainty over future Libya crude production. Even after U.S. crude inventories reached another record high, “traders barely flinched.”

The firm’s balances would suggest that supply and demand are in harmony for the first time in four months. “But should a second wave hit and demand worsen, just the moment supply from OPEC-plus and North American shale players comes back online, we are in for a very painful rest of 2020.”