The May West Texas Intermediate (WTI) crude oil futures contract plunged into negative territory Monday, reflecting an unprecedented surplus of oil and lack of demand amid the Covid-19 pandemic. 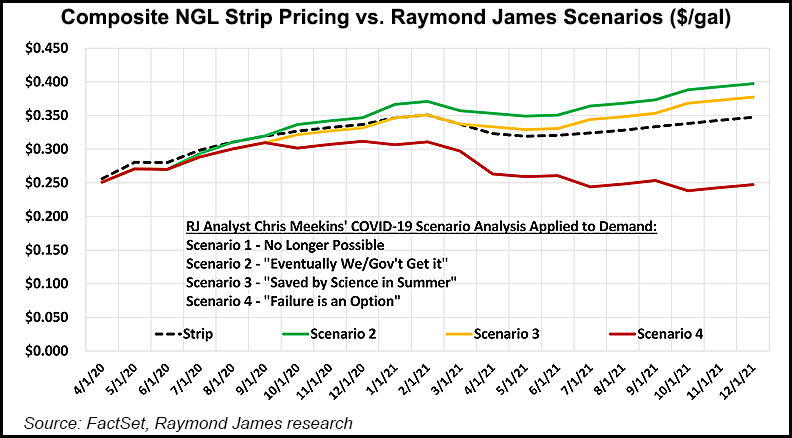 With the May WTI contract set to expire Tuesday, “no one wants to get caught being forced to take delivery of crude, since finding a home for it right now is extremely difficult,” said NGI’s Patrick Rau, director of strategy and research.

U.S. crude oil storage is nearing 80% capacity, Rau said, “and while technically that means there is still some room, demand has fallen far more quickly than supply right now, so you have to figure…some of that forthcoming excess production is already ticketed for storage.

Rau said exploration and production companies with hedges in place are likely to continue producing until there is nowhere to put the crude.

“As more tankers get used for storage, that should continue to push tanker day rates higher,” he said. “You don’t often see transportation of crude being more expensive than the crude itself, but that is becoming more and more likely.”

This means “pricey shut-ins or even bankruptcies could now be cheaper for some operators, instead of paying…to get rid of what they produce.”

The sudden sell-off is a consequence of wishful thinking by the market since March, Dickson said,“when the full scale of the oversupply problem started to become evident but the market remained oblivious. Since then traders have sent prices up and down on speculation, hopes, tweets and wishful thinking. But now reality is setting in.”

Now that the threshold of negative prices has been reached, “the next logical step will be shut-ins and bankruptcies,” Dickson said.

The WTI sell-off has been building since last Wednesday, when the Energy Information Administration (EIA) announced a record 19 million b/d build of oil stocks. At the current pace, Dickson said that storage tanks at the Cushing hub in Oklahoma are almost certain to reach capacity during May.

Traders “have been gobbling up cheap oil and pumping storage full, and now, in the case of WTI and Cushing, storage has reached a physical limit,” Dickson said. Rystad estimated earlier on Monday “that there was only 21 million bbl of free storage left.”

Monday marks “a shift in the calculus of shale players, who are already selling at a loss to hold on long enough until peers begin to fold,” Dickson said. “Now I think we will begin to see even more creative infrastructure solutions to achieve maximum storage capacity.”

Although attempting a 2020 natural gas liquids (NGL) price forecast amid the current market turmoil is “almost futile,” liquids prices can reasonably be expected to stay at historic lows through the rest of this year before starting to recover in 2021, Raymond James & Associates Inc. analysts J.R. Weston and Justin Jenkins said in a Monday research note published before markets opened.

However, the partial recovery forecast for 2021 is relative to “a very low baseline,” the analysts cautioned, citing that NGL prices, after averaging around 50 cents/gal into early 2020, fell by almost 40% in March to levels not even seen during the 2014-2016 oil price collapse.

Weston and Jenkins said they don’t expect prices to approach 50 cents/gal until at least the end of next year amid a gradual reopening of the economy and recovery in demand.

The timing of these events may be crucial for NGL prices, as it could for most commodities and equities, Weston and Jenkins said. “But it’s safe to say that the next several months in U.S. NGL markets are going to be pretty rough.”

The analysts noted that “NGL markets are uniquely captive to dynamics extending far outside their control — oil production economics, natural gas prices, gasoline demand, etc. — and these components are largely in upheaval amid the Covid-19 outbreak.”

The Raymond James analysts said, “One of the few bright spots for U.S. NGL fundamentals is the possibility of U.S. producers shutting in producing wells in response to the global crude oil oversupply.”
Raymond James is forecasting that as much as 675,000 b/d of existing NGL production could be shut-in as the result of shut-in stripper wells, which are oil wells that produce under 25 b/d as of January.