One of the 10 largest U.S. natural gas producers, Tulsa, OK-based WPX Energy Inc., said Monday that its Niobrara formation discovery well in the Piceance Basin of western Colorado has exceeded 1 Bcf of production in a little more than 100 days of operation. 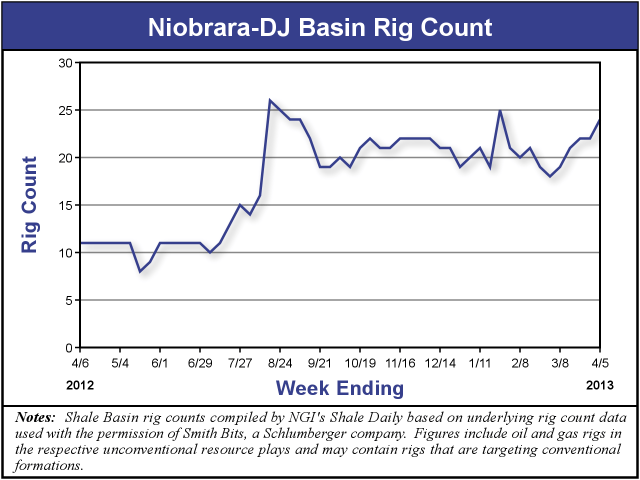 At that rate the discovery well promises to produce in its first four months what a normal Piceance Basin Williams Fork formation well takes a 25- to 30-year lifecycle to produce, a WPX spokesperson said.

In January, the company foreshadowed the unusual output when it reported that its first horizontal test well in western Colorado’s Piceance Basin produced encouraging results, including the potential of more than doubling company’s proved, probable and possible reserves, which were about 18 Tcf at the end of 2012 (see Shale Daily, Jan. 25).

WPX said it began drilling its second Niobrara well last Wednesday and expects to begin completion activities on the second well in June. As previously announced, the company plans to drill a total of four horizontal Niobrara wells this year.

“The drilling plan is designed to prove up adjacent acreage and test the repeatability of the play on additional acreage the company owns,” the spokesperson said. “WPX already has extensive processing and takeaway capacity under contract in the Piceance to support Niobrara production.”

Of the 13 unconventional plays that NGI’s Shale Daily tracks rig count information for, the Niobrara is currently the only one that has more rigs in operation today than one year ago, thanks in large part to the oily features of the play. According to NGI’s Shale Daily Unconventional Rig Count for the week ending April 5, the Niobrara-DJ Basin has 24 rigs in operation, which is up 118% from the 11 rigs running there one year ago.

The prolific WPX well is located on part of WPX’s western Colorado acreage, which includes lease rights to about 180,000 net acres of the Niobrara/Mancos plays. The discovery well initially produced 16 MMcf/d at a flowing pressure of 7,300 psi, according to WPX, and it registered an average production rate of almost 10 MMcf/d during the first 90 days, despite being “choked back substantially.”

WPX CEO Ralph Hill said the company likes what it is seeing so far in the Niobrara. “This well is demonstrating tremendous strength…with significant upside potential,” he said.