The explosive growth of the Marcellus and Utica shales in recent years has crowded out natural gas flowing from the Western Canadian Sedimentary Basin (WCSB) toward traditional downstream destinations in markets that include the Midwest and Eastern Canada, but new developments could alter the competitive balance moving forward. 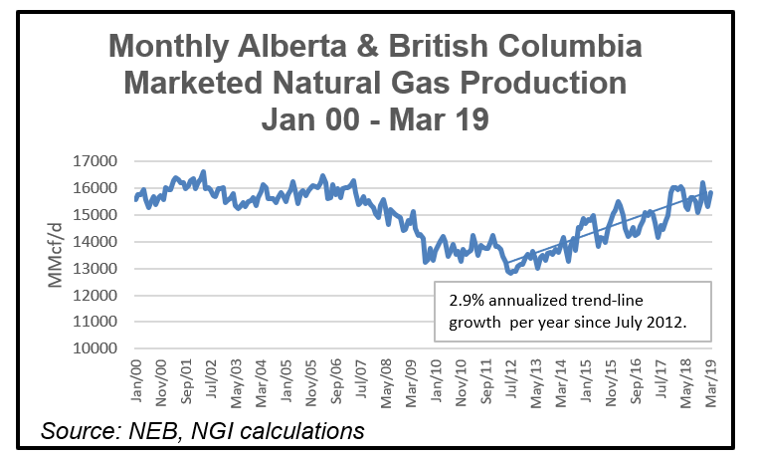 Another toll cut, the third since 2017, is set to go into effect on TC Energy Corp.’s cross-Canada natural gas Mainline beginning in November, a boon for WCSB producers hammered by negative basis differentials in recent years. The company is also in the process of expanding capacity on the Nova Gas Transmission Ltd. (NGTL) system.

This comes as Northeast producers, finally able to stretch their legs somewhat after a buildout of pipeline capacity, face challenging headwinds. Broader natural gas market weakness, a result of oversupply catalyzed in large part by the Appalachian Basin, has coincided with a shift in equity markets. An investment community that once rewarded producers for achieving growth is now demanding to see returns.

According to the Canadian Energy Research Institute (CERI), eastbound flows on TC’s Mainline fell from 6 Bcf/d in 2006 to only 2.7 Bcf/d in 2017. However, the Calgary economics agency recently concluded that the bargain toll lifted volumes to 3.1 Bcf/d in 2018.

It remains to be seen whether expansions and discounted tolls will see the WCSB gas market’s fortunes change after a period of prolonged low spot prices. But one thing is clear: Natural gas buyers in markets that include Chicago Citygate and Dawn have benefited from the competition between the two basins.

The broader weakness in the North American natural gas market notwithstanding, pipeline capacity added from the Northeast in recent years, such as the east-to-west Rover and Nexus Gas Transmission pipelines, has improved pricing at Appalachian hubs, helping to alleviate the once-extreme negative basis differentials at locations like Dominion South.

A look back at average winter pricing in the two regional hubs shows how pricing dynamics have evolved in these respective regions over the past half decade.

Conversely, winter prices at Dominion South have generally strengthened over the same time frame. Since bottoming out at an average $1.220/MMBtu in the winter of 2015/16, Dominion South prices have strengthened dramatically, especially this past winter, when prices averaged above $3.

The weakness in NOVA/AECO C prices comes as WCSB output has continued to climb in Alberta and British Columbia (BC) even in the face of “relentless competition” from Lower 48 producers, RBN Energy LLC analyst Martin King observed in a recent blog post.

“Producers have employed a number of tactics to remain viable in the undoubtedly difficult pricing environment, including efforts to lower production costs and concentrate their horizontal drilling in more economically attractive plays such as the Montney formation in northeastern BC and western Alberta,” King said.

Here, producers get the added benefit of higher-value crude oil and natural gas liquids. “In fact, liquids production has become the focus, and — as in the Permian Basin and Bakken Shale, for example — natural gas has become a sort of by-product,” King said. “As a result, even more gas supply is flooding the market.”

Recent estimates from Calgary-based producers Tourmaline Oil Corp. and Bellatrix Exploration Ltd. indicate that out of a baseline 15 Bcf/d of WCSB production, about 5.3 Bcf/d (35%) is consumed in Alberta and BC, 3.4 Bcf/d (22%) is shipped to the U.S. West Coast, 3.1 Bcf/d (21%) is shipped directly to Chicago via the Alliance and Northern Border pipelines, and 3.4 Bcf/d (22%) goes east on the TC Mainline.

WCSB production, reflecting output from Alberta and BC, makes up around 97-98% of total Canadian natural gas production, according to NGI calculations. Since bottoming out in July 2012, WCSB production has grown at an annualized trend-line rate of 2.9%/year.

Western Canadian natural gas production, mostly from Alberta and BC, “has averaged about 16 Bcf/d in 2018 and 2019 year-to-date, and this past January, it topped 16.7 Bcf/d, just shy of the peaks last seen in the mid-2000s,” King said. “Production has stayed strong even as prices at AECO…have plummeted to historical lows” from a combination of U.S. competition, “slower demand growth locally and pipeline takeaway constraints.”

For the takeaway constraints, more capacity appears to be on the way for the WCSB.

TC is undergoing a C$6.7 billion ($5 billion) expansion of its NGTL system that’s expected to conclude in 2022. Total NGTL traffic is forecast to increase by 16% to 13.7 Bcf/d by April 2022, compared with 11.8 Bcf/d in 2018. The network relays three-quarters of Alberta and BC gas production into long-distance national and export pipelines as well as Western Canada markets. The expansion includes the 1.7 Bcf/d North Montney Mainline, expected online starting this year.

TC is also moving forward with its Coastal GasLink pipeline, which, in conjunction with Shell Canada Energy Ltd.’s LNG Canada export terminal, presents an enticing prospect for WCSB supply to move west out of the basin to markets overseas.

Still, the prospect of new takeaway for WCSB gas hasn’t necessarily improved the market’s outlook for prices in the basin, based on recent forward trading. According to NGI calculations, future basis differentials through December 2028 were averaging minus US$1.039/MMBtu as of late August, compared to an average basis differential of minus US58.4 cents/MMBtu from January 2016 to August 2019.

New opportunities lie on the horizon for WCSB producers, but significant challenges remain. For one, the fate of the WCSB gas market remains linked to Canada’s oilsands, a significant source of gas demand in the region.

“In our view, the original root cause” of weakness in the AECO market “isn’t a lack of natural gas export capacity but much lower-than-expected oilsands demand caused, at least in part, by the lack of oil pipeline egress — bringing the issue full-circle,” analysts with Tudor, Pickering, Holt & Co. (TPH) said in a recent note to clients.

Having cheap local supply, intra-Alberta gas demand has grown in recent years, driven in large part by a combination of power generation and oilsands production, according to RBN’s King.

“Data from the Alberta Energy Regulator shows that demand from both of these sectors effectively doubled from 2010 to 2018,” King said. “…Much of how Western Canada’s gas-demand scenario unfolds will depend on the timing and magnitude of future coal plant use and the extent of the expansion of oil supply growth from the oilsands.

“Oilsands producers face their own set of issues, including insufficient takeaway capacity to get supply out of Canada and the resulting discounts on supply prices…There’s also the possibility that Canada’s environmental regulations and objectives may dampen prospects for oilsands production. For now, however, signs point to continued growth in crude production (and gas supply).”

Meanwhile, WCSB gas producers targeting markets farther east will also have to contend with competition from the Bakken Shale. The Bakken has been undergoing something of a revival, leading midstreamers like Energy Transfer LP to gauge interest in moving more crude from the region. More crude production brings the potential for more associated gas output.

TC Pipelines LP management recently indicated that receipts from the Bakken onto its Northern Border Pipeline have climbed to as high as 1.4 Bcf/d, accounting for 50%-plus of deliveries onto the system.

NGI estimates based on government and industry data indicate that around 663 MMcf/d of associated gas was being flared in the Bakken as of June. Whiting Petroleum Corp. management recently said it expected another 1.0 Bcf/d of processing capacity online in the play by next year. This raises the possibility that gas currently being flared in the Bakken could soon compete with WCSB volumes flowing into Northern Border.

Bakken supply has also been crowding out Montney Shale production on the Alliance Pipeline, according to King.

“Alliance was conceived and built in the late 1990s (and began operating in December 2000) as a bullet line to ship higher-value liquids-rich natural gas to Pembina’s 2.1-MMcf/d Aux Sable gas processing and fractionation plant outside of Chicago,” King said. “Thus, the transnational pipe would seem to be well-positioned to deal with the upsurge in wet gas supplies from the Montney and related plays in the past few years. The problem is that Alliance is running full, and Bakken gas has been taking a greater share of available capacity on the pipe.”

In recent years, Alliance’s effective export capacity has fallen from around 1.8 Bcf/d to around 1.6 Bcf/d, with throughput at the Sherwood border point also decreasing, the analyst said.

“Prior to 2010, Alliance was almost exclusively moving WCSB supply and didn’t have receipt interconnects south of the U.S.-Canada border,” King said. “But in the early 2010s, two interconnects were added that receive supply from two new pipes moving gas from Bakken processing plants: the Prairie Rose Pipeline in Bantry, ND, in 2010, and the Tioga Lateral pipeline in 2013.

“Together, these can deliver as much as 250 MMcf/d to Alliance, and both of these receipt points remain nearly full year-round. Thus, Canadian gas exports through Alliance have effectively been handicapped due to downstream Bakken receipts.” Absent “clear plans” for expanding export capacity on the pipe, King said he expects Alliance’s effective capacity to stay near current levels through 2022.

With so much new production pushing its way into the heart of the continent, the shale era has substantially mitigated winter premiums at Midwest population centers in recent years. The Appalachian pipeline buildout alone has seen major expansions like Rover, Nexus and new capacity on the eastern segment of Rockies Express all target the region with additional supply.

This has helped to tamp down winter prices at major hubs like Chicago Citygate and Dawn in Ontario. A look at NGI’s Daily GPI historical data shows that average winter spot prices at Dawn (November through March) barely traded above Henry Hub during the past two winters.

In 2017/18, Dawn averaged $3.050, about a nickel above the Henry Hub benchmark. Also that winter, Chicago Citygate actually traded at a discount to Henry on average at only $2.956. Winter 2018/19 also saw relative parity between Midwest demand centers and benchmark prices. Henry Hub averaged $3.327 this past winter, compared to $3.360 for Dawn and $3.392 for Chicago Citygate.

By contrast, the Midwest hubs traded at a much larger premium to Henry Hub during the 2014/15 winter, prior to the Rover and Nexus expansions coming online. That winter, Chicago Citygate prices averaged $3.570, and Dawn averaged $3.890. That’s versus an average Henry Hub price of $3.211.