The domestic and global outlook for natural gas remains relatively bright under a Joseph R. Biden Jr.  presidency, despite increasingly negative sentiment toward fossil fuels, according to experts. 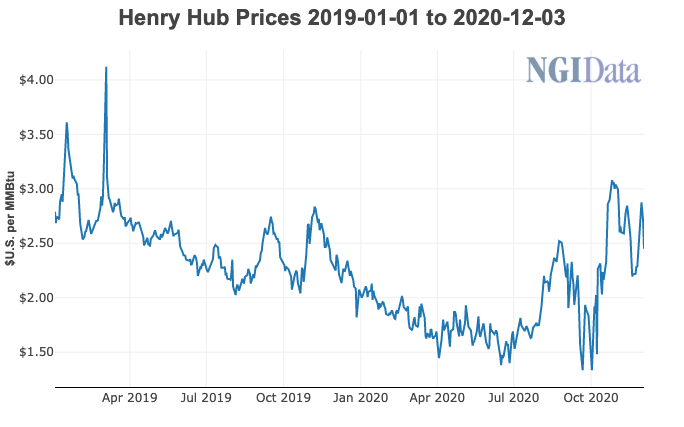 Although the president-elect is calling for a carbon-free power sector by 2030, gas-fired generation is needed to accommodate growing penetration of intermittent wind and solar energy in the United States, according to Enverus’ Bernadette Johnson, vice president of market intelligence.

“So what happens in the meantime is, you see natural gas demand actually expanding pretty much in lockstep with renewables, because it is the bridge fuel,” she said.

The Energy Information Administration said Friday gas-fired generation grew by double-digit percentages across most of the Lower 48 between 2015 and 2019.

“I think gas is a really important part of the puzzle,” said WindSail Capital Group co-founder Ian Bowles. In a recent webcast discussion hosted by Raymond James and Associates Inc., he said, “my guess is intuitively that Biden certainly would understand that and I guess people around him would as well.”

Bowles, who served as the Massachusetts secretary of energy and environmental affairs under Gov. Deval Patrck, may be considered for a high-level position at the Environmental Protection Agency under Biden, the Washington Post has reported.

Former Energy Secretary Ernest Moniz, who served in the Obama administration, expressed a similar view recently on the Columbia Energy Exchange podcast. “I have not seen a credible modeling of getting to deep decarbonization without having a continuing role for natural gas for some time,” adding that gas has been instrumental in enabling the growth of wind and solar.

Moniz noted, however, that the gas industry industry must do a better job of plugging methane leaks, and that carbon capture and green hydrogen must also be incorporated at large scale to offset the climate-warming impacts of natural gas.

In Johnson’s view, a Biden presidency generally “is not great news for commodity prices.” However, gas should be less sensitive than oil to geopolitical events, namely a possible revival of the Joint Comprehensive Plan of Action, aka the Iran Nuclear Deal.

The possible removal of sanctions on Iranian oil exports probably is the most immediate threat to commodity prices posed by Biden, Johnson said, but any impact likely wouldn’t be felt until at least late 2021 or 2022. The recent killing of Iran’s top nuclear scientist, which the Iranian government has blamed on Israel and the United States, has cast further doubt on the timing and probability of a resuscitated nuclear deal.

The natural gas market, meanwhile, “even in 2020, has recovered faster and stronger than we’re seeing with the liquids market,” Johnson said. She cited that U.S. feed gas volumes for liquefied natural gas (LNG) export terminals have returned to historic highs above 10 Bcf/d after plunging below 4 Bcf/d at the height of a global supply glut exacerbated by the Covid-19 pandemic.

NGI’s Patrick Rau, head of strategy and research, said while the resurgence of LNG exports is partly credited to seasonal heating demand, a “return to normalcy is underlying an increase in the base amounts of U.S. LNG demand…”

He added, “U.S. LNG is very much in the money right now, and that creates a major call on U.S. gas.”

On the upstream side, Biden has said repeatedly that he will not pursue a blanket ban on hydraulic fracturing, but he has pledged to halt new drilling permits on federal property, both on land and offshore.

Federal leases accounted for more than 20% of total U.S. oil and gas supply in 2019, according to Moody’s Investors Service.

Among onshore plays, the New Mexico portion of the Permian Basin’s Delaware sub-basin stands to be especially hard hit limits on federal drilling.

Johnson said she expects Biden to follow through on limiting federal drilling permits, but  that she does not expect such a ban to have a major impact on commodity prices.

Infrastructure is one area where the natural gas and oil industry is likely to face continued challenges, regardless of who occupies the White House.

Bowles said Biden is likely to rejuvenate the National Environmental Policy Act (NEPA), a law which touches nearly every major infrastructure project in the country, and which has been weakened under the Trump administration.

Johnson noted that many projects, such as the Enbridge Inc. Line 5 crude oil pipeline, are likely to continue seeing stiffer government opposition at the state level than federally.

Other projects such as the Dakota Access Pipeline and Keystone XL, are more vulnerable to executive action, she said.As for LNG infrastructure, the Department of Energy in recent days finalized a rule excluding terminals from review under NEPA, although Biden’s government “may be inclined to rescind and reverse this rule,” according to analysts at Clearview Energy Partners LLC.