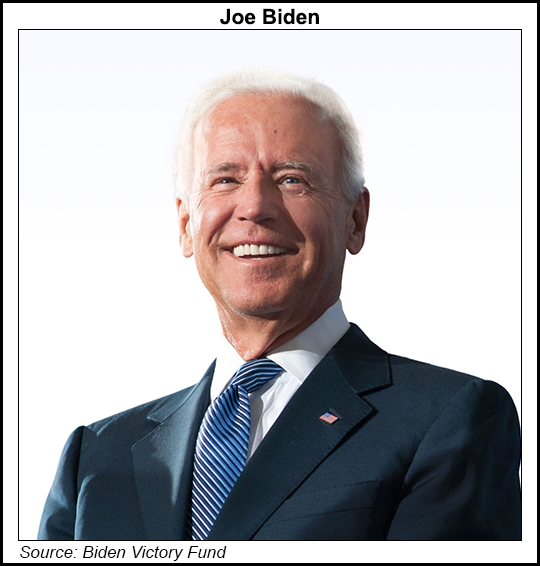 The accelerated transformation of the electricity sector “represents the biggest job creation and economic opportunity engine of the 21st century,” according to the plan, part of what would be the most ambitious proposal by any U.S. president to combat climate change.

“These are the most critical investments we can make for the long-term health and vitality of both the American economy, and the physical health and safety of the American people,” Biden said during a speech in Wilmington, DE. “Even if we weren’t facing a pandemic and an economic crisis, we should be making these investments anyway.”

Biden is aiming for the U.S. economy to achieve net zero carbon emissions by 2050 by decarbonizing the power sector, retrofitting and rebuilding the country’s infrastructure, and accelerating the deployment of electric vehicles (EV).

Biden said his administration would add 500,000 EV charging stations nationwide, and electrify the government’s vehicle fleet, “with the government providing the demand and the grants to re-tool factories that are struggling to compete.

“The U.S. auto industry and its deep bench of suppliers will step up, expanding capacity so that the United States, not China, leads the world in clean vehicle production,” the former vice president said.

The Build Back Better plan does not address onshore oil and natural gas production nor the future of oil and gas pipelines, which has looked increasingly uncertain in recent weeks.

Biden in his speech said he would hold oil and gas companies accountable for failing to properly plug and abandon wells, and he criticized oil and gas executives for accepting multimillion dollar payouts days before declaring bankruptcy amid the current economic crisis.

Ahead of Biden’s speech, American Petroleum Institute (API) President Mike Sommers said, “You can’t address the risks of climate change without America’s natural gas and oil industry, which continues to lead the world in emissions reductions while delivering affordable, reliable and cleaner energy to all Americans.”

Biden’s plan “would require a massive amount of infrastructure buildout, a goal we all share,” Sommers said. “Unfortunately, it comes at a time when we’ve seen opposition to energy projects of all kinds with activist groups obstructing development every step of the way.

“We will continue to work with members of both parties to advance real solutions to climate change that build on American energy leadership and protect the good-paying union jobs our industry supports in states like Ohio and Pennsylvania and across the country.”A recent survey of Texas oil and gas companies by the University of Houston found that respondents viewed a Biden victory as the biggest threat facing the future of their companies.