The 2013 Atlantic Hurricane season is deep into its second half and there has yet to be any significant threat to natural gas and oil interests in the Gulf of Mexico (GOM). But even if a tropical storm were to blow through the GOM, would it have the same impact on prices and supply as storms have in the past? 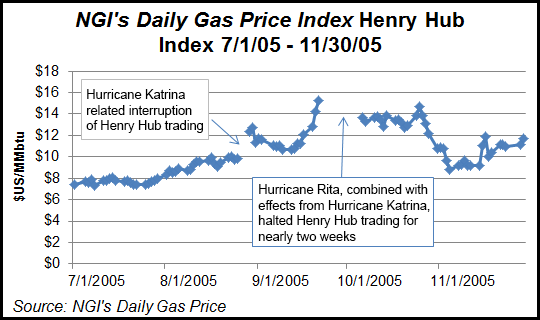 “Certainly, the human effects of a hurricane are horrible, so in that sense you can’t overplay it, but in fact it means less and less to the reliability of the United States gas supply,” said Maryland-based energy consultant Ben Schlesinger.

Hurricanes Rita and Katrina wreaked havoc on the oil and natural gas industry, onshore and in the GOM, during the 2005 season (see Daily GPI, Dec. 7, 2005). But that was an unusually active season, with a total of 26 named storms, including 14 hurricanes and seven intense hurricanes, and the oil/gas industry has changed significantly since then.

“Rita and Katrina were interesting because they gave us the first inkling of the incredible, monster supply that we have in the United States in the form of shale gas that we really didn’t understand or realize in the mid-00’s…they knocked out the Gulf, with jackup rigs torn up and ripping up pipelines; it was a mess, with something like 90% shutoffs,” Schlesinger told NGI. “The onshore hub prices went really high, but then after a day most of them came back to normal, and then by two or three days there was essentially no effect.”

According to NGI‘s Daily Gas Price Index, physical prices returned to previous levels pretty quickly at a number of hubs after Rita, but trading at the Henry Hub in South Louisiana was offline for nearly two weeks.

“We were looking at this data and thinking ‘wait a minute, how can this be? Nominations are being refused; the pipeline industry is in mayhem, and yet prices are basically not reacting,'” he said. “And the answer, of course, is that gas came rushing from onshore fields to replace the lost offshore gas to the point that pricing was restored almost immediately.”

“We should batten the hatches because you can still have rigs coming loose,” he said. “I understand they’ve improved the anchoring from the Rita and Katrina days, so they’re more reliable, but it’s still going to happen in the worst conditions.”

In any event, the amount of natural gas in storage this year would lessen the blow from a GOM hurricane. There was 3,253 Bcf in underground storage for the week ending Sept. 6, 1.4% above the five-year average, according to the Energy Information Administration. In September 2005, traders were still monitoring GOM shut-in figures in Hurricane Katrina’s aftermath, near-month natural gas futures prices were above $11/Mcf and working gas in storage stood at 2,758 Bcf (see Daily GPI, Sept. 16, 2005).

For now, the 2013 Atlantic hurricane season poses little threat to GOM energy interests. While the consensus forecast has been for above-average tropical storm activity this year, forecasters have been moderating their pre-season predictions (see Daily GPI, Aug. 23). In a tropical forecast issued last month, Weather Services International Chief Meteorologist Todd Crawford pointed out that 70% of all named storms and 80% of all hurricanes in the past 10 years have occurred after Aug. 15, “so the heart of the season is still on the way.”

The ninth named storm of the season, Ingrid, which formed last week east-northeast of Veracruz (see Daily GPI, Sept. 16), dissipated over central Mexico Tuesday, leaving no trace beyond heavy rain and some mild winds, according to the National Hurricane Center (NHC). Tropical Storm Humberto, which had been the season’s first hurricane, was in the central Atlantic, about 1,070 miles west-southwest of the Azores, and was expected to move toward the North Atlantic over the next few days, NHC said.

NHC was also tracking a broad area of low pressure over Belize and the Southern Yucatan peninsula that the forecasters said had a 40% change of becoming a tropical cyclone by midday Thursday. “This system is forecast to move slowly toward the west-northwest and emerge over the Bay of Campeche on Wednesday,” NHC said. “Environmental conditions are expected to be favorable for development during the next day or two…environmental conditions should continue to be generally conducive for some additional development during the next several days as the disturbance moves slowly across the southern Gulf of Mexico.”