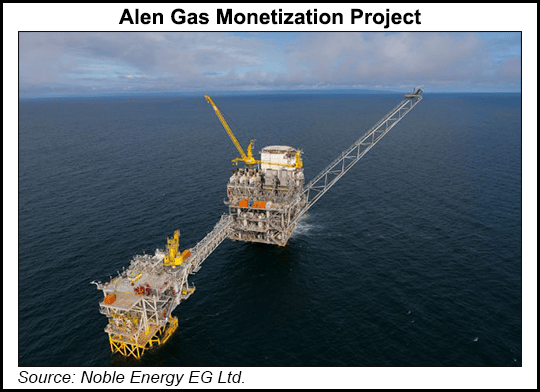 The project, overseen by Chevron’s Noble Energy EG Ltd., runs 70 kilometers (43.5 miles) from the field in the Douala Basin. Processing is done at existing onshore facilities, maximizing how the current and future regional gas resources are developed and potentially turned into liquefied natural gas (LNG) exports.

Noble Energy EG’s Gene Kornegay, country manager, said as a “strategic partner” in the joint project, the management team looked forward to “contributing to the economic and social development of the country.”

Alen initially ramped in 2013 as a condensate production and gas recycling project. Since its startup, gas had been reinjected into the reservoir to support enhanced liquids recovery. Condensate continues to be produced and transported for sale to the Aseng field production, storage and offloading vessel.

Alen’s gas is to be processed through an existing Alba Plant LLC liquefied petroleum gas plant operated by Marathon Oil Corp., as well as Marathon’s Equatorial Guinea LNG production facility at Punta Europa, Bioko Island.Alen is considered a key to continue expanding the country’s Equatorial Guinea Gas Mega Hub. Alen is one of the gas-rich prizes that Chevron captured in its merger with Noble. The Leviathan gas project offshore Israel, which Noble developed, is underway. Noble had discovered an estimated 3 Tcf in the Douala Basin alone, which is helping to fuel a plethora of gassy resources in the Eastern Mediterranean and beyond.