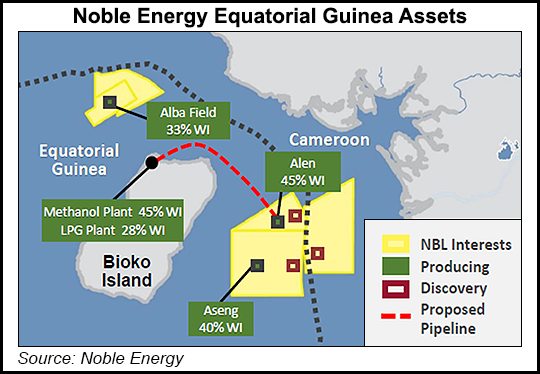 Definitive agreements were executed between the field partners, plant owners and the EG government. The Alen development would be the first step toward creating a gas export hub, which could open the region to monetizing more discovered resources through existing infrastructure, according to Noble Senior Vice President J. Keith Elliott and Marathon Oil’s Mitch Little, executive vice president of operations.

“This agreement is a significant step toward solidifying Punta Europa as a cornerstone component of the EG Gas Mega Hub for the potential development of local and regional natural gas,” Little said. “With tie-ins available and minor modifications underway at the Alba Plant, capital requirements are minimal. Importantly, the project leverages existing capacity of the world-class Alba gas plant and EG LNG facilities, and all parties benefit from exposure to global LNG prices.”

First production from the Alen field “is anticipated in the first half of 2021, following on our world-class Leviathan project, which is expected to begin producing late this year,” Elliott said. The first phase of the Noble-led Leviathan development offshore Israel is to include four subsea wells, each capable of flowing more than 300 MMcf/d. Proved reserves are about 3.3 Tcf net (9.4 Tcf gross), or 550 million boe net.

“Noble Energy has discovered 3 Tcf of gross natural gas resources in the Douala Basin, which positions us well for LNG sales exposure over the coming decade,” Elliott noted.

The Alen field initially ramped in 2013 as a condensate production and gas recycling project. Since its startup, gas has been produced and reinjected into the reservoir to support enhanced liquids recovery. Primary condensate would continue to be produced and transported for sale to the Aseng field production, storage and offloading vessel.

The field would use three existing high-capacity production wells on the platform, with minor modifications to deliver sales gas to the Alba Plant and EG LNG. A planned 24-inch diameter pipeline capable of handling 950 MMcfe/d would transport all the processed gas about 70 kilometers (43 miles) to onshore facilities. Total estimated gross recoverable resources from the Alen field are about 600 Bcfe.

At start up, gas sales from the field are expected to be 200-300 MMcfe/d gross, with 75-115 MMcfe/d net to Noble. The wet gas stream would be tolled through the Alba Plant for additional liquids recovery before converting dry gas into LNG via the EG LNG facility.

The partners would maintain ownership of the hydrocarbons through the processing facilities, and negotiations are progressing “for offtake agreements to sell the LNG in global markets,” Noble management said.

Gross capital expenditures (capex) for the Alen development are estimated at $330 million, with capex incurred this year and in 2020.

The Alen field on EG’s Block O is 95% owned by Noble, and it owns 5% of Block 1. Noble also operates the field and holds a 45% overall working interest in the project. In addition, Noble has a 28% stake in Marathon Oil’s Alba Plant, while Sociedad Nacional de Gas de Guinea Ecuatorial, i.e. Sonagas GE SA also is a stakeholder.

Marathon Oil noted that about 80% of its total current workforce in EG is composed of national citizens, with nearly 1,250 Equatoguineans employed directly or indirectly across the Punta Europa complex.