A “rebalancing” of the global liquefied natural gas (LNG) market is closer than previously thought as supply outages linger and demand continues to grow, according to Morgan Stanley Research. 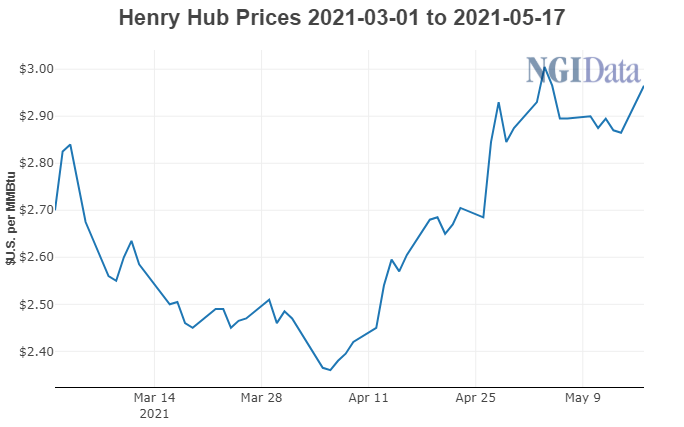 The rebalancing originally pegged for 2022 has “accelerated” into 2021, analysts led by Devin McDermott said.

In the United States, demand growth largely driven by LNG exports is expected to outpace supply additions as producers look to maintain or moderately grow output. Morgan Stanley expect production to grow by 2 Bcf/d this summer over last year, with demand increasing by 8 Bcf/d.

Still, production is trending “a bit high” against the firm’s forecast, the analysts said. That could pose a threat to Morgan Stanley’s full-year forecast of $3.00/MMBtu for Henry Hub prices, according to the research. Market watchers expect U.S. LNG facilities to run at full capacity through the summer to feed the increase in global demand.

“We expect modest growth to resume” in the gassy Haynesville and Marcellus shales, with Permian Basin associated gas also picking up in the third quarter, “supporting price backwardation into 2022,” the analysts said. Morgan Stanley’s price forecast for 2022 is $2.75/MMBtu.

The U.S. Energy Information Administration predicted Monday that natural gas output in the Haynesville and Permian will grow in June, though it expects Appalachian production to drop. The agency forecast Haynesville production would trend 118 MMcf/d higher in June than May, with Permian output up 59 MMcf/d month/month. In Appalachia, output is forecast to decrease by 52 MMcf/d.

The run-up to summer has seen Asian and European natural gas prices hit new highs as the regions compete for supply.

Outages in Norway, Australia, and Russia, as well as dwindling feed gas in Trinidad & Tobago, are weighing on the LNG market, which Morgan Stanley previously expected to be oversupplied this summer. That tightness reduces the possibility of a repeat of last year, when dozens of U.S. LNG cargoes were canceled as demand fizzled amid the Covid-19 pandemic, Morgan Stanley said.

For Asia, Morgan Stanley increased its full-year 2021 forecast for the Japan-Korea Marker (JKM) benchmark to $8.75/MMBtu from $7.50/MMBtu. Currently low European Union storage  levels are “a contributor to global LNG strength at the moment, so continued EU gas market tightness could cause JKM to overshoot to the upside in the near-term,” the analysts said. “Separately, stronger pricing for oil-linked contracts or higher costs of alternative fuels…could also be supportive of near-term LNG prices.”

European gas prices, meanwhile, have “surprised on the upside” as demand growth accelerated from 1.2% in 1Q2021 to 19% in April and the first days of May above the 2017-2019 average. The rapid growth was largely because of cold weather and coal-to-gas switching, with carbon prices up 70% year to date, according to Morgan Stanley. The firm increased its forecast for TTF by 15% to $6.60/MMBtu. The prediction implies the benchmark could more than double year/year.

However, the firm noted the current rally in prices appears “overextended,” and there may be some downside risk in the second half of the year if Asian demand growth decelerates and as downed LNG plants come back online. Still, it maintained a higher forecast for 2023 and beyond.

“We continue to see a capacity shortfall by 2023,” with a need for another 60 million metric tons/year of new project sanctioning to meet demand expectations by 2030, the firm said.