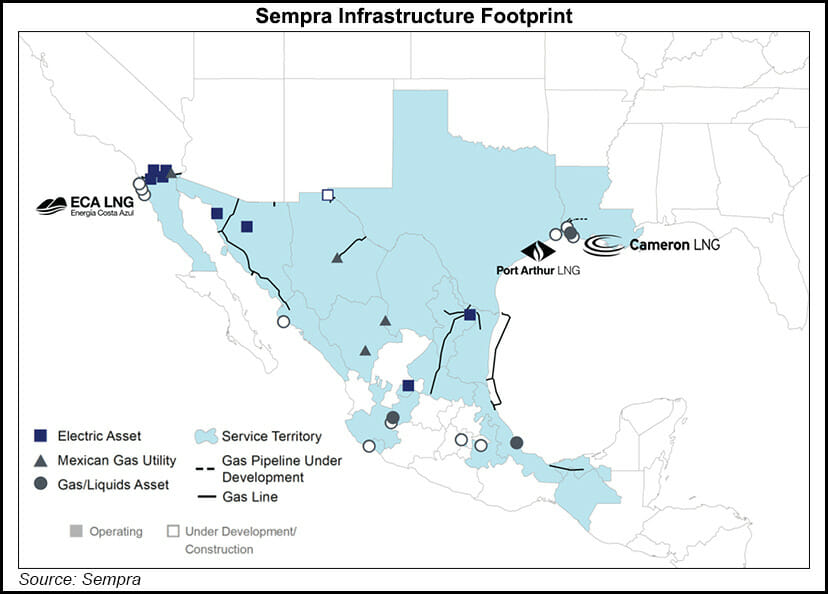 Martin said the first phase at ECA LNG was “going well,” with expectations to meet its target to bring the facility online in 2024. He said rising construction costs are likely to give brownfield LNG projects an extra advantage over greenfield sites as planned developments move toward potential sanctioning.

“Greenfield projects tend to have a little bit of a higher per-unit cost than brownfield projects,” Martin said during the 2Q2021 earnings call. “This will continue to put pressure on that dichotomy.”

Sempra also is eyeing a separate LNG export project called Vista Pacifico with capacity of 3-4 mmty at the port of Topolobampo in Sinaloa state.

In June, Sempra placed its greenfield Port Arthur, TX, LNG export project on the backburner. It plans to  make a final investment decision (FID) on the brownfield Cameron, LA, LNG expansion at the end of 2022.  Management remains “quite bullish” on the proposed one-train Cameron expansion, Martin said.

“Port Arthur is probably a longer term opportunity, but we have more work to be done there,” he said.

Martin said while increased costs because of inflation are likely to impact pre-FID projects, ballooning global LNG demand may be a bigger factor in moving developments forward.

“Most people who are observing this industry think it will be the most dominant fuel used in the world by the early part of next decade,” Martin said. “And the only way that’s going to occur is, you’re going to see a massive build-out of continued LNG development.”

When asked about the economics of the one-train Cameron expansion versus Port Arthur, Martin said the company expects the Louisiana project to have “superior” returns. “That’s largely because at a high level, you can always expect the economics of brownfield projects to be generally superior to greenfield projects,” he said, adding that the key for Port Arthur would be to build it in phases at scale.

Earlier this year, Sempra increased its ownership interest in Mexico’s IEnova to 96.4%. Martin said the company was looking to a cash tender process “with a view toward taking out that additional public float and delisting that business.”

IEnova develops and operates energy infrastructure in Mexico. As of 2020, the company had 1,400 employees and about $10.5 billion dollars in total assets.