Sempra executives on Tuesday (June 29) said bringing the initial phase of the Energía Costa Azul (ECA) liquefied natural gas (LNG) project online in Baja California, Mexico was a top priority, but also said they are already looking at ways to lower the cost of a planned expansion. 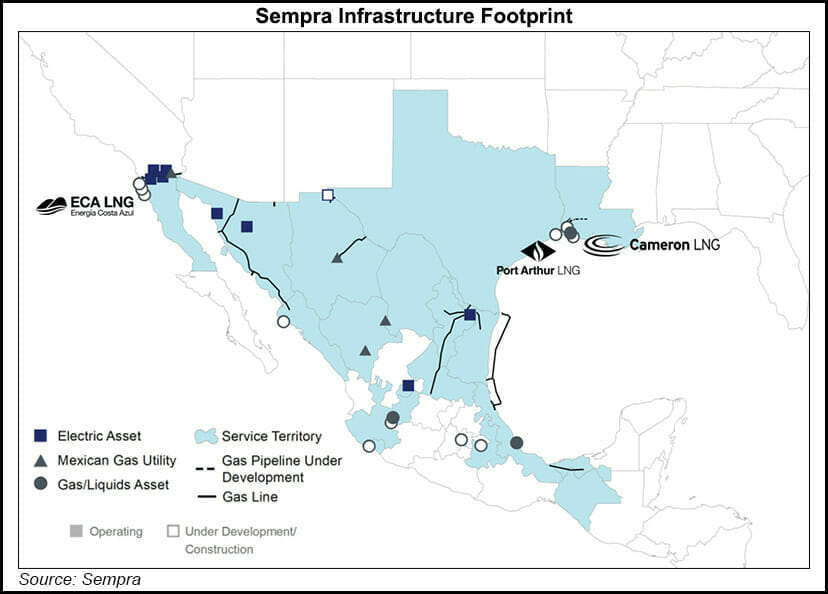 “It’s an optimization game,” Sempra LNG CEO Justin Bird said during the company’s investor day webcast. “How can we best build an expansion that reduces the cost per unit of LNG and frankly, in Mexico, can also support economic growth in the Baja regions in Mexico?”

Under its current design, Phase 2 would add about 12 million metric tons (mmty) of LNG capacity to the 3.25 mmty initial project, which was sanctioned last year and is expected to enter service in 2024.

Bird said the company was looking at some “exciting” options for optimization, including pipeline capacity.

“There is a lot of excess pipeline transportation capacity in Mexico,” he said. “Some of that can frankly be used to create LNG exports. So we’re looking at some other opportunities there.”

Bird made the remarks as Sempra unveiled plans to scale back another proposed expansion, at its Cameron LNG facility on the U.S. Gulf Coast.

“As we looked at ECA Phase 2, I think there are some interesting things,” he said. “And again, I think what you’ve seen us do…at Cameron Phase 2 is illustrative of that.”

“We’ve got about a $2.4 billion capital program to support that project, which we hope to turn into operation by the end of 2024,” Sempra CEO Jeff Martin said.

The ECA LNG project, one of multiple liquefaction terminals envisaged for Mexico’s West Coast, would allow U.S. gas exports to bypass the Panama Canal and reach Pacific demand markets faster and more cheaply. Western U.S. energy advocates have said the project and ones like it could throw a lifeline to flagging production in the region.

French supermajor TotalEnergies holds a 16.6% stake in ECA LNG and has a 20-year offtake contract to purchase 1.7 mmty from the facility. Mitsui & Co. also has a 20-year sale and purchase agreement for approximately 0.8 million mmty.

At Cameron, Sempra now plans to develop one 6 mmty train instead of the two totalling 9.97 mmty, citing design innovations and the “high performance” of the existing three-train plant.

CEO Jeff Martin said construction of the optimized train and increased efficiency from future debottlenecking, “puts us in a position to have some of the lowest-cost new capacity in the world in LNG.”

The new design is undergoing preliminary front-end engineering and design work with studies scheduled to get underway later this year, Sempra LNG CEO Justin Bird said. A final investment decision (FID) could take place by the end of 2022.

The new scheme would reduce spending and not require additional tanks or berths, Bird said. The company also is looking into incorporating electric drives on the new train for the refrigeration compressors.

“Doing so will not only increase production, but has the potential to reduce greenhouse gas emissions by 60-65%,” he said. The site could still add up to three more trains or “other types of clean energy infrastructure.”

The Cameron LNG expansion could be sanctioned before the planned Port Arthur LNG project in Texas, which had been targeted for a 2022 FID. Bird said the company is continuing to evaluate design changes at the Port Arthur site east of Houston, such as switching to electric drives and sourcing electricity from renewable power to lower the facility’s emissions profile.

“We continue to be excited about Cameron on one hand,” Martin said. “On Port Arthur…we think we have the opportunity to go ahead today and make that project more competitive by evaluating design changes…If we do that, as we’re targeting, we can expect to reduce the emissions from that facility by about 60-65%. So we still remain bullish on the overall business case for Port Arthur, but clearly it’s moved back in terms of the timeline.”

Sempra entered initial agreements with Saudi Arabia Oil Co., aka Saudi Aramco, in 2019 to negotiate selling a 25% stake in the Port Arthur project and a potential offtake deal. On Tuesday, Bird said the companies mutually agreed to let the agreements expire.

“Our relationship with Saudi Aramco is important to us,” Bird said. “And as we continue our discussions with them, we look forward to partnering with them in the future.”

There could be a role for the Port Arthur site in the future as the energy transition continues to whirr. Bird said Sempra has been approached by “parties interested in participating in carbon capture and/or hydrogen facilities at Port Arthur. These are in addition to the proposed LNG facility, and we’re actively pursuing these exciting opportunities.”

Another agreement with Aramco could be in the offing, as the Saudi company has been on the hunt for blue hydrogen opportunities.

“It is an area where we’re completely aligned with them,” he said. “So we still think there’s a lot to do with Saudi Aramco. Although these current agreements for the current LNG that was contemplated have expired, we see additional opportunities to work with them both in the LNG space, blue hydrogen or other opportunities. So we remain pretty excited about that relationship and expect it to come to fruition.”

The development would allow Cameron to achieve a 15% reduction in Scope 1 emissions, or direct emissions. In addition, the project could provide additional business lines, Bird said.

“Not only can we capture the carbon associated with Cameron, it provides the base to capture other carbon from other LNG facilities or other industrial processes in that area,” he said. “So it’s something we’re really excited about.”

Sempra is one of a number of LNG suppliers looking to lower their emissions profiles to meet piling customer demands. Developers including NextDecade Corp. and Venture Global LNG Inc. have also recently unveiled plans for CCS facilities to lower the carbon footprints of their facilities.

“Once completed, we expect Hackberry Carbon Sequestration would serve as the beginning of a hub for the Lake Charles area to help the region reach its net-zero goal,” Bird said.