Lower 48 onshore oil and gas reserves are a huge energy pond, about 1.1 Qcfe worth, and the Marcellus Shale is its biggest fish. According to new research from Calgary-based ITG Investment Research, “the Marcellus dwarfs any other resource at 330 Tcfe, followed by the Eagle Ford and Bakken [shales] at 152 Tcfe (25 billion boe) and 72 Tcfe (12 billion boe), respectively. 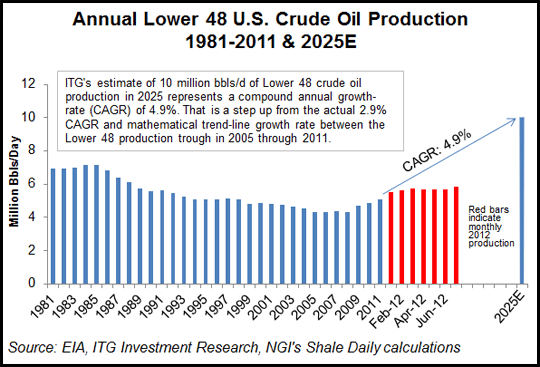 And the pond large enough to hold such a fish?

The U.S. Lower 48 onshore has 1.1 quadrillion cubic feet equivalent (Qcfe) of recoverable resources across 450,000 drilling locations, according to a new analysis by Calgary-based ITG Investment Research, which, not surprisingly, cited the big-name shales for being reserves and production stars.

Additionally, the firm’s 64-page report “No More Guessing: Hardcore IV” estimates recoverable resources of 900 Tcfe in 10 overlapping plays, compared to 426 Tcfe for those same plays as estimated in a recent study by the U.S. Energy Information Agency, the firm said.

The ITG study is based on a county-by-county dispatch curve for 37 major onshore plays. According to the study, of the 1.1 Qcfe in resource, more than 680 Tcfe comes from gas-prone counties, 210 Tcfe from liquids-rich counties and more than 30 billion boe from oil-prone counties.

“Our go-forward model predicts natural gas additions will level out at about 2.4 Bcf/d per month,” ITG said. “We expect liquids-rich plays to contribute about 1.2 Bcf/d to monthly gas additions and dry gas plays to add about 900 MMcf/d. The remaining 300 MMcf/d comes from base gas additions, which include unaccounted for onshore/offshore plays.

“There is a scenario in which the Marcellus alone can add up to 750 MMcf/d per month of dry gas additions, assuming 150 horizontal rigs versus the 90 in our base case scenario.”

Based on rig assumptions, ITG’s model shows Lower 48 natural gas production will fall slightly through 2013 and then grow again, but at a much slower rate than that of the last few years. ITG estimates the average breakeven production cost of incremental new gas was about $4.30/Mcf in 2011 and calculates this figure has now declined to about $3.70/Mcf. “The drop reflects a greater percentage of rigs in liquids-rich plays plus a greater percentage of dry gas coming from the low-cost Marcellus,” the firm said.

The current horizontal rig-weighted supply cost for gas plays averages $4.35/Mcf, while the figure for oil and liquids-rich plays averages about $2.94/Mcf, or $74/bbl.

The base decline rate for Lower 48 natural gas is 25% and for oil it is 20%, ITG said, based on production data from more than one million wells.

If the ongoing processing capacity buildout continues in the Lower 48 and liquids-rich plays are processed to full capacity, ITG said natural gas liquids production (excluding C5+ products) could grow to 3.2 million b/d by 2020 and about 3.5 million b/d by 2025.

ITG forecasts total Lower 48 onshore oil production will reach 10 million b/d by 2025, up from the current rate of about 6 million b/d. Bakken, Eagle Ford and Permian are the three main growth drivers, each expected to contribute more than 1.5 million b/d in 2025 and each having current weighted average breakeven prices of about $65/bbl for West Texas Intermediate crude.

A very early estimate of the Western Canadian resource base by another Calgary-based engineering firm, Sproule Associates, released just last week, put shale resources in five of an estimated 50 Canadian basins at between 809 Tcf and 2.2 Qcf, which could produce between 170 and 435 Tcf of marketable gas. “Given the early stage of development and the relatively limited production data available for each of these plays, a range of outcomes is most appropriate because the level of uncertainty is high,” the Sproule report said.

ITG’s estimate of 10 million b/d of Lower 48 crude oil production in 2025 represents a compound annual growth-rate (CAGR) of 4.9%. That is a step up from the actual 2.9% CAGR and mathematical trend-line growth rate between the Lower 48 production trough in 2005 through 2011.