The energy sector was quick to take a red pen to the 2020 budget in March as the coronavirus turned into a pandemic and the price war continued overseas, but some operators are finding they have to cut deeper in the face of uncertain demand for oil and gas. 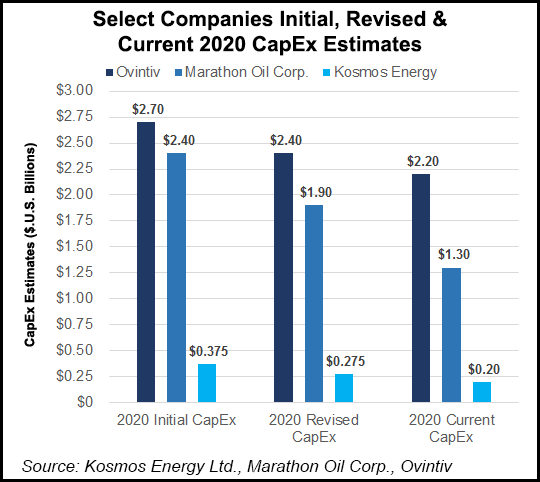 For North American exploration and production (E&P) companies, a consensus appears to be building around average capital expenditure (capex) reductions of 35-40% from 2019, as Evercore ISI reported earlier this month.

In another calculation, IHS Herold said to date, North American E&Ps have slashed spend on average by 36%, translating to a $24.4 billion reduction. International oil companies have cut capex by 20-30%, with substantial reductions taken in U.S. operations.

“The ”Big Cut’ is here,” IHS Markit’s Daniel Yergin, vice chairman, said Thursday. “The U.S. government can’t order cutbacks like other countries. But economics and the market are mandating dramatic budget cuts that will bring down U.S. production this year.”

IHS estimates U.S. crude production will decline by 2.9 million b/d by the end of the year versus 1Q2020. Canada, whose main producing province of Alberta already has constrained production via a curtailment policy, also will be impacted, with total investments in the oilsands sector expected to be the lowest in 15 years.

“Of the 44 North America E&Ps that have made public spending announcements, 41 are cutting relative to 2019 levels,” according to IHS. “This year would mark the second consecutive year of lower spending. In 2018, North American E&P spending was $87 billion.

Houston-based Marathon Oil Corp., which last month reduced capital spending by around one-third, now expects expenditures to be one-half of what they were in 2019.

In addition, drilling activity in the Permian Basin Delaware has been suspended, with only a “limited” number of wells to be tied to sales this year. Hydraulic fracturing (frack) “holidays” also are planned in the Bakken and Eagle Ford shales through June.

Marathon initially set capex for 2020 at $2.4 billion. Because of the decline in consumption related to the coronavirus pandemic, the budget was revised in March by 30% to $1.9 billion. At that time, it also suspended drilling and completion activity in Oklahoma.

The independent now expects to spend no more than $1.3 billion in 2020, with the primary focus in the Eagle Ford and Bakken.

The “dynamic macro environment” has led Marathon to retain flexibility to adjust capex further as needed. “We’re maintaining our returns-first mindset with a focus on preserving value through the cycle,” said CEO Lee Tillman. “Against a highly volatile and uncertain environment, these decisive actions are designed first and foremost to protect our balance sheet and our hard earned financial strength.”

Denver-based Ovintiv Inc. also has taken its capex down by another notch after reducing spend last month by $300 million. The independent now plans to further reduce its second quarter investments by an additional $200 million.

“We have built our company with tremendous flexibility and optionality for volatile and uncertain times like we are currently experiencing,” said CEO Doug Suttles. “We are using and expect to continue to use this flexibility as market conditions evolve.”

At Dallas-based Kosmos Energy Ltd., which explores in the Gulf of Mexico and overseas, the operator has identified another $75 million in cost reductions, bringing the total savings identified since mid-March to around $235 million. The company is now targeting total capex of $200-225 million in 2020.

Taking a hit in the Kosmos lineup is the BP plc-led Greater Tortue Ahmeyim Project offshore Mauritania. The natural gas project has been delayed by up to a year because of the pandemic.

“With border closures, travel bans, social-distancing restrictions and office closures arising from the coronavirus, the project’s activities across global locations have been impacted,” management said.

“These ongoing restrictions have had an impact on time-critical workstreams, including the construction of the breakwater during the 2020 weather window. As a result, the Phase 1 project timeline is expected to be delayed by approximately 12 months, with first gas now expected in the first half of 2023.” Phase 1 is more than 30% complete.

“The year delay of the project as a result of missing the weather window is an inevitable consequence, but the safety of our people and those of our partners remains the priority during these unprecedented times,” Kosmos CEO Andrew G. Inglis said. “We are working with the operator to optimize the capital phasing of the project.”