The Lower 48 oil and natural gas business that BP plc carved out under a separate umbrella took a tumble in the second quarter, with the rig count falling from 13 working during the first three months of the year to only one at the end of June. 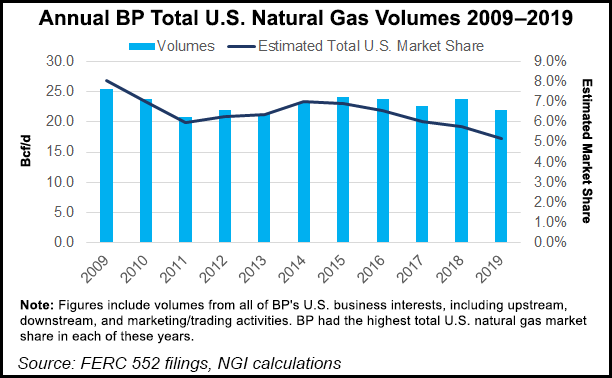 The primary production focus of Denver-based BPX Energy is in Texas, where unconventional resources abound in the Permian Basin and Eagle Ford Shale, as well as the Haynesville Shale, which straddles portions of East Texas and North Louisiana.

Because parent BP plc is charting a staggering 40% reduction in production as it transforms from hydrocarbons into an integrated energy company, executives were asked how the U.S. onshore fits in with those intentions. No mention of the U.S. onshore was made during the formal conference call presentation.

CFO Murray Auchincloss tried to assuage concerns. “BPX remains core to the business,” he told analysts during the quarterly conference call. The Lower 48 unit “continues to do really well…The reservoirs are better than we thought; we’re finding more zones than we thought originally.”

BP long has been working in North America, and early on became a producing machine both onshore and in the Gulf of Mexico and Alaska. It also has for years been the No. 1 natural gas marketer in North America, according to NGI’s quarterly tally.

Through the years the North American portfolio has been shuffled and reshuffled. Two years ago BPX became an onshore producing giant, more than doubling oil production to 124,000 b/d-plus with BP’s $10.5 billion purchase of BPH Texas-rich assets. The deal also lifted U.S. natural gas production at that time to 2.175 Bcf/d from 2018’s 1.705 Bcf/d.

Cost synergies that have come from rolling the BHP portfolio into BPX are “above the $352 million target” management had set, Auchincloss noted.

In addition, declining oilfield costs should give an assist when activity ramps up.

BPX at the end of June had total net proved reserves estimated at 1.016 billion boe, down from year-ago reserves of 1.982 billion boe/d.

The only rig running at the end of June was in the Permian, a drastic decline from the first three months and a year ago.

“We have two great gas basins,” the CFO said. Haynesville is a gas-weighted basin, while the Permian has massive associated gas as the No. 1 oil basin.

The breakeven for producing BPX assets today is “around $3.00/Mcf Henry Hub, which you can see in the forward markets in December.” For West Texas Intermediate oil, the breakeven is around $35, which puts BPX in the money today.

The Lower 48 is “cash flow breakeven with about $1 billion of capital expenditures going in,” Auchincloss said. “If prices pick up and we get activity going back in there, we should start to see growth in cash flow over time” with “strong returns potential.”

The quality of the reservoir “still matters.”