BP plc turned the investor world on its head Tuesday with a revamped strategy to slash oil and natural gas production while pouring billions into low-carbon investments. 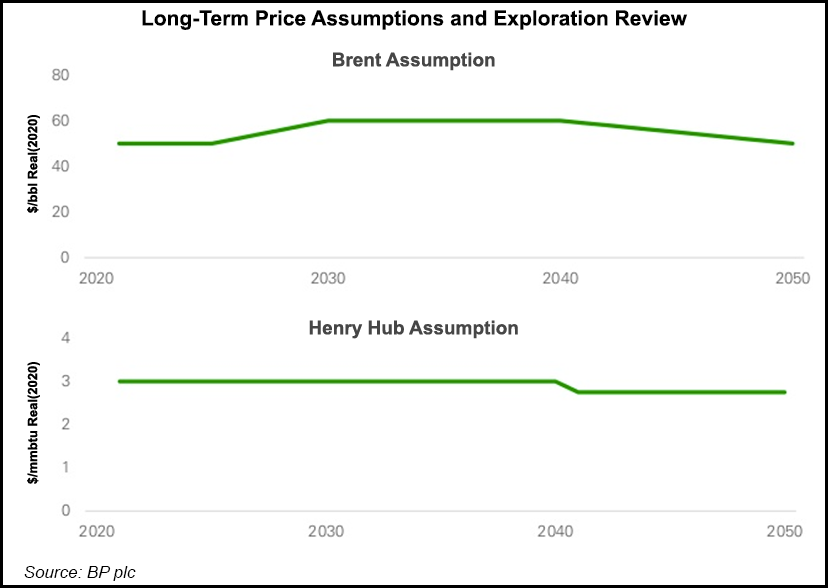 CEO Bernard Looney, during a lengthy conference call with top executives, further outlined the strategy that he had first unveiled in February, to put the company on a path toward “reimagining” energy. The Covid-19 pandemic has only reaffirmed that goal.

“We’re moving earlier than we thought on our strategy; we’re moving faster, we’re moving further and we’re moving more decisively,” Looney said. “The world is in a different place because of Covid-19 and the more we understand about the consequences for the global economy and the inevitable uncertainty that it brings, the more convinced we are that the ambition and the direction that we laid out…is taking us in the right direction for BP.

The announcement did not overshadow a net loss of $16.8 billion (minus $1.98/share), compared with year-ago profits of $1.8 billion (83 cents). The dividend also was cut by half.

The 2Q2020 results included an impairment charge of $11.8 billion on the value of the oil and gas assets, as well as exploration write-offs. BP in June had signaled impairments could be up to $17.5 billion.

Oil and gas prices have faced a reckoning with the pandemic, CFO Murray Auchincloss said during the call. Along with an overabundance of oil, the gas markets were slammed by “the weaker economy,” which “further reduced demand and worsened in the pre-existing oversupply in the market.”

Henry Hub averaged $1.70/Mcf through the quarter, “the lowest in 25 years,” he said, with National Balancing Point gas averaging $1.60 and the Japan Korea Marker at $2.10.

BP in the third quarter to date has seen retail fuel demand recover, but it is still around 10-15% below a year ago, Auchincloss said. Meanwhile, “aviation fuel demand has remained more than 70% lower than a year ago.”

BP is forecasting global gross domestic product to contract by 4-5% this year. Global oil demand is expected to be around 8-9 million b/d lower than in 2019. Natural gas markets “are likely to remain materially oversupplied,” Auchincloss said.

The No. 1 natural gas marketer in North America plans to boost alternative energy investments by 2030 to $5 billion, a 10-fold increase, to help deliver on the promise made four months ago (ahead of the pandemic) that it would reach net zero emissions by 2050.

“We’re known as a major gas producer in the United States,” Looney said, but “it is probably not so well known that we are the biggest marketer of natural gas in North America,” with about 20 Bcf/d in sales for the last 20 years.

“We’ve been building relationships with over 100 cities across the United States to help meet their energy demands with a combination of gas, electricity, storage, pipeline capacity and physical risk management. This is integrated energy management in operation, and it is a capability that we can and now plan to extend into other regional markets.”

Oil and natural gas production is expected to decline by at least 1 million boe/d by 2030, a 40% reduction from 2019 levels. However, with a plethora of activity in global onshore and offshore enclaves in process, the bulk of capital expenditures for the next five years still are to be centered on the oil and gas investments.

The reset for BP came in part by engaging stakeholders, Looney noted.

“So many people I talked to all over the world want us to help deal with the threat of climate change,” he said. “At the same time, there is a deep belief amongst us that this is a huge business opportunity for BP. We can make BP a better company and create value by taking on this opportunity, and we believe and we hope and we think that we are one of the best placed companies in the world to do that.”

In the next decade the plan is to “significantly scale up our low-carbon electricity and energy business…and we plan to focus our valuable oil, gas and refining portfolio and make it more resilient.”

The supermajor in the early 2000s was one of the first of its peers to make big bets on alternative energies. However, it pulled back from a “Beyond Petroleum” plan in 2013 and sold off investments, including a big chunk of its U.S. wind farm portfolio. Still, BP has remained a top investor in the alternatives market. For example, three years ago it invested $200 million into large-scale solar developer Lightsource.

The pivot from two main products, oil and gas, in its 110-year history is toward even bigger investments in bioenergy, hydrogen, as well as carbon capture and storage, Looney said.

For example, BP expects to install 70,000 electric vehicle charging points over the period, versus 7,500 today.  In addition, over the next five years BP plans to sell off its refining portfolio and raise $25 billion by selling assets. The petrochemicals unit was sold in June.

As part of the pivot, the culture of BP also is transforming, Looney said.

BP has reduced its leadership positions by half to 120. A top layer management has been cut, “with more layers to come out so we can create a more agile organization, one that is more connected to the front line,” Looney said.

Forty percent of the new leadership team is women, with about one-third “ethnically diverse…good but not good enough,” he said. “We are not fully reflective yet of BP as a whole in all the communities in which we operate…We will get there.”

Fossil fuel demand is waning, in part as consumers rethink how they travel, said BP’s Giulia Chierchia, executive vice president, Strategy and Sustainability. Demand could plummet by 75% over the next 30 years if the increase in global temperatures is limited to 1.5 C, or by 50% if warming is less than 2 C, Chierchia said.