Construction on the first phase of the Royal Dutch Shell plc-led liquefied natural gas (LNG) export facility in British Columbia, known as LNG Canada, has hit the halfway point, with activity to accelerate in the coming months. 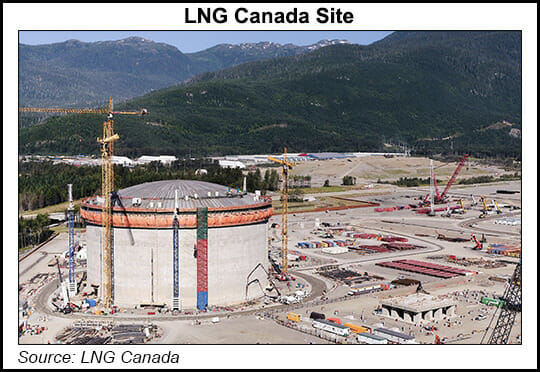 In a notice posted on the LNG Canada website Wednesday, management said the project had “just surpassed the 50% completion mark,” adding things were “moving swiftly” toward commissioning and start-up.

Management also noted the project has been able to reach major milestones “safely and on schedule” despite the Covid-19 pandemic. Those milestones include raising the roof on its LNG tank and the arrival of its main cryogenic heat exchanger and two precooler units.

Looking ahead, the first liquefaction module is expected to arrive on-site in the next six-to-12 months, staff said in a video.

“It’s going to be fast and furious from then on,” senior contract manager Spenser Heard said in the video.

The first phase comprises two trains capable of producing 14 million tons/year combined. A second phase, which has not been sanctioned, could expand the facility by two additional trains.

The project is expected to ship its first cargo around the middle of the decade.

The LNG Canada consortium has recently been involved in a dispute with Canadian pipeline giant TC Energy Corp. over increased costs and delays on the TC-led Coastal GasLink system, which would supply feed gas to the facility.

In August, TC Executive Vice President Tracy Robinson said discussions with LNG Canada were continuing. During the 2Q2021 earnings call, she said TC and its Coastal GasLink partners were focused on commercial conversations “as a mechanism” to resolve the disagreement.

Around the same time, LNG Canada President Peter Zebedee said progress on Coastal GasLink was encouraging, but the consortium remained “concerned” about the increased cost estimates and schedule delay.

Shell holds a 40% interest in LNG Canada. Its partners are Malaysia’s Petroliam Nasional Berhad, aka Petronas, with 25%, PetroChina Co. Ltd. and Japan’s Mitsubishi Corp. with 15% each, and Korea Gas Corp. with 5%.