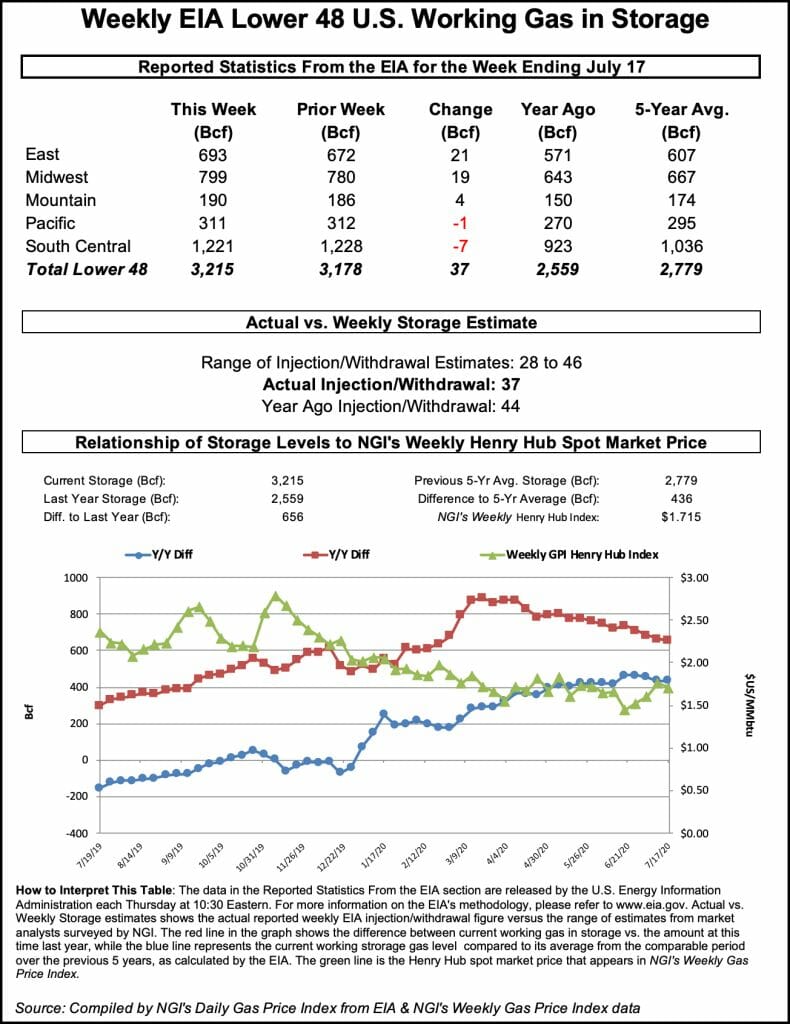 The latest storage figure served as evidence that robust summer heat across the Lower 48 is driving strong cooling demand and curtailing the risk for storage containment this fall. The most recent build lifted inventories to 3,215 Bcf, above the five-year average of 2,779 Bcf.

Forecasters expect continued above-average temperatures into August, a development that could continue to bolster demand at a time when other drivers of energy use are muted by the Covid-19 pandemic.

Cases of the virus topped four million on Thursday, according to Johns Hopkins University, and several states and large cities have either paused or rolled back portions of their business reopening plans amid a resurgence of the disease’s spread in recent weeks. This could stunt an economic recovery that started to gather momentum in May and early June, when reopening efforts got underway.

The U.S. Labor Department also reported Thursday that initial unemployment claims rose by a seasonally adjusted 109,000 to 1.4 million for the week ended July 18. The weekly claims number peaked at 6.9 million in late March. However, the increase last week indicated a disruption in the labor market recovery, economists said, one that could discourage consumer spending, curb economic growth and fuel a morose cycle.

“The most recent consumer spending data has been pointing to slow growth since mid-June,” said Freddie Mac’s chief economist Sam Khater. “The concern is that the pause in economic activity will cause unemployment to remain elevated” and “lead to longer-term labor market distress.”

Natural gas futures traders, however, looked beyond macro warning signs and embraced the bullish EIA report, which was roughly in line with expectations and lower than the year-earlier figure. Prior to the report, major polls had estimated injections of 35-36 Bcf. NGI estimated a build of 35 Bcf.

NatGasWeather said high temperatures were above normal throughout the week covered by the EIA report. Cooling demand and power burns were strong. The forecaster looks for continued light additions to gas stockpiles into next month.

“It likely helps that the weather data shows a very warm to hot pattern having good odds of lasting into mid-August,” the firm said. “Essentially, a tighter market is likely by the time summer heat begins to ease.”

Should the heat hold as predicted, it would provide more time for economic recovery and more substantial improvement in demand for U.S. liquefied natural gas (LNG) exports. The pandemic suppressed LNG demand from key export destinations in Europe and Asia.

“This does buy some time for LNG to show signs of recovering,” NatGasWeather said.

In the near term, the forecaster’s seven-day outlook points to “hot, high pressure continuing to stretch from California to Texas with highs of mid-90s to 110s, while uncomfortably hot and humid with 90s across the South, Southeast and Mid-Atlantic Coast.” Looking into the first week of August, the firm added, “Very warm to hot conditions will rule most of the United States with highs of mid-80s to 100s for strong demand.”

Spot prices advanced across much of the Lower 48 amid lofty temperatures.

The Northeast as well as California, where price swings have been common this summer, were notable exceptions to the upward momentum Thursday. PNGTS shed 20.5 cents to $2.660, while SoCal Citygate lost 7.5 cents to $1.680.

Notably, the National Hurricane Center (NHC)onThursday was tracking a pair of storms, including Tropical Depression 8 in the Gulf of Mexico. The tropical depression was poised to become a tropical storm before moving inland over Texas by Saturday, bringing heavy rain and the potential for strong winds and minor coastal flooding, NHC said.

Tropical Storm Gonzalo, meanwhile, was moving westward and expected to approach the Windward Islands by this weekend, NHC said. At midday on Thursday, Gonzalo was about 800 miles east of the islands. The NHC said the storm had weakened some but could still evolve into a hurricane before the weekend.