Latin American liquefied natural gas (LNG) imports have dropped significantly since March from the same period last year, but it is unclear to what extent the Covid-19 pandemic has contributed to the decline. 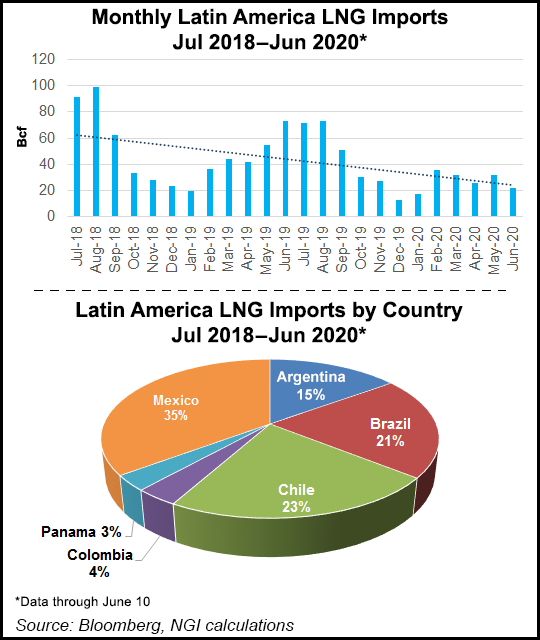 Six Latin American nations imported LNG equivalent to a combined 32 Bcf in May, 26 Bcf in April and 32 Bcf in March, according to Bloomberg data and NGI calculations. The May volumes were down by 41%, while April was 38% lower and March imports dropped by 26%.

However, the February import total of 35 Bcf was only 4% lower from a year ago, indicating that before the pandemic hit Latin America, some nations may have taken advantage of lower LNG prices because of decreased Asian demand.

The drop in Latin American imports has mostly been caused by declines in three countries that historically have been among the largest importers in the region — Argentina, Brazil and Mexico. Since July 2018, the three countries together accounted for 66% of Latin American LNG imports, according to Bloomberg and NGI calculations. Since last November, however, they have only accounted for 53%, after accounting for 72% from July 2018 through last October.

Poten & Partners’ Jason Feer, head of business intelligence, said he wasn’t sure Covid-19 to date “had a huge impact on Latin America. It seems to be a big problem in Argentina and Brazil that may be making a difference. But I suspect there are other issues. Mexican LNG demand has been falling quickly as they take more U.S. natural gas via new pipelines. Our long-term forecast for the region is basically flat.”

In March, Argentina ordered 11 LNG cargoes for this year’s Southern Cone winter to take advantage of low LNG prices despite its growing production from Vaca Muerta. The first shipment was expected in May. Argentina imported about 7 Bcfe in the first week of June, possibly indicating that more shipments arrived.

State energy firm Integración Energética Argentina (Ieasa) said contracted prices for the requested shipments “were the lowest recorded in the history of the company” and averaged about $3.00/MMBtu. That still would be higher than NGI’s assessed delivered ex-ship (DES) spot price to Argentina’s Bahia Blanca, which on Thursday was $1.79/MMBtu for delivery in July, $1.80 for August and $2.09 in September.

“Covid-related demand destruction is certainly having a major impact on global gas demand, and Latin America is no different,” said NGI’s Patrick Rau, director of strategy & research. “But the large year/year declines in total Latin America LNG imports are also being impacted by fewer cargoes being taken from Mexico, now that the 2.6 Bcf/d Sur de Texas-Tuxpan offshore pipeline is operational. That system wasn’t commercial until last September, so current year/year monthly import calculations are working off a higher year-ago base level.”

Tudor, Pickering, Holt and Co. (TPH) said Wednesday that with current low prices Mexico may import more LNG and less U.S. gas as the pandemic recedes. “Cheap LNG and sunk cost economics could see the tables turned with LNG imports to Mexico potentially pushing out pipe flows from the US,” analysts said.

The Altamira LNG terminal along Mexico’s east coast is scheduled to receive a 3.2 Bcf cargo this month, its first import since October, TPH said. The shipment would be a re-export from France on a ship under long-term charter to Total SA, which owns 25% of Altamira, TPH noted. The Manzanillo LNG terminal along Mexico’s west coast receives shipments more regularly, as that part of the country is not as well connected to the domestic pipeline grid.

Brazil imported a combined 32 Bcf in January-March, more than double the 13 Bcf imported in the year-ago period despite heavy rains early this year, indicating the country may have also taken advantage of low prices in the first quarter. It did not import any LNG in April but imported 3 Bcf in May, potentially indicating its purchases were slowed by the pandemic, which has hit the country hard.

Imports at Latin America’s three other LNG importing countries — Chile, Colombia and Panama – have not dropped as much since the outbreak of the pandemic.