Latin American liquefied natural gas (LNG) demand has had a record year in 2021 and it is not letting up, tightening a global gas market that has sent prices spiking around the world. 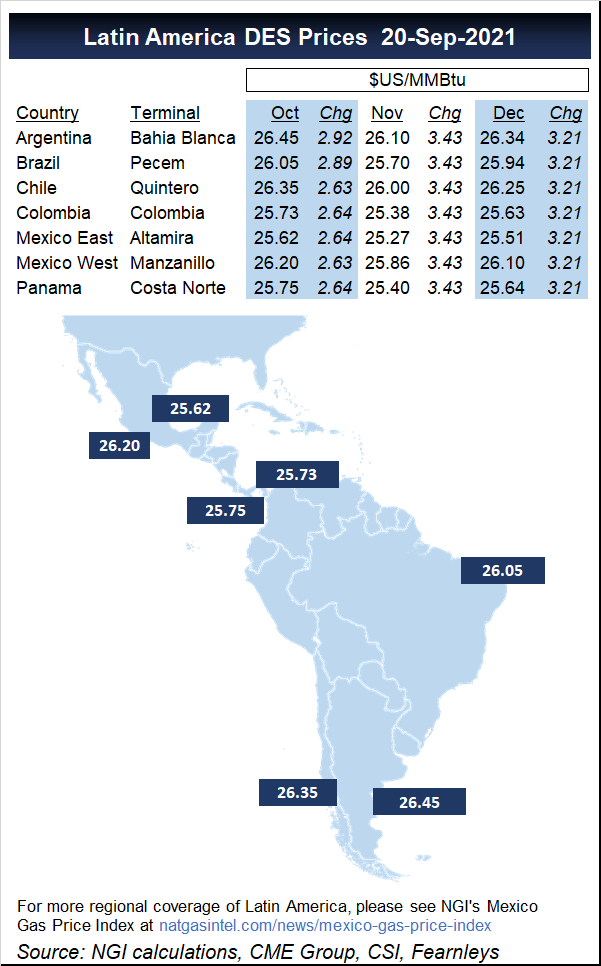 Imports of LNG into Latin America for the first eight months of the year added up to 10.44 million tons, according to market research firm Kpler. Imports were 120% higher than in the comparable period last year, and up 36% compared with the January-August period in 2019.

LNG imports into Latin America to date in September, at 1.02 million tons, are already double the entire month of September 2020, according to Kpler.

Brazil, which is heavily dependent on hydroelectric power for its electricity, is facing a record drought and is leaning on LNG to keep the lights on. To date in September, Brazilian LNG imports have totaled 654,000 tons, versus zero cargoes in September 2020.

Argentina and Chile LNG imports have also been robust, in particular during the colder May-September months, according to Kpler data.

Argentina brought on a second LNG import option in May following lower than expected domestic gas production and rising demand.

“This continues to pull some of the much-needed ex-U.S. cargoes away from Europe, as 89% of September volumes into Latin America were sourced from the United States,” Costerousse said. Qatar and Equatorial Guinea supplied the rest, at 6% and 5% respectively.

In light of the crisis, the International Energy Agency on Tuesday issued a statement urging Russia to send more supplies to Europe and to inject more gas into storage for the upcoming winter to confront the crisis. The global energy watchdog said the drought in Latin America was part of the global puzzle leading to short storage inventories.

Mexico To Cash In?

Mexico now relies mainly on gas pipeline imports from the United States to meet demand, but interest from Asian buyers amid the pricing and demand frenzy is leading to new interest in a trio of Mexico export projects.

Mexico Pacific Ltd. LLC (MPL) CEO Doug Shanda told NGI’s Mexico GPI earlier this month that 22 million metric tons/year (mmty) of binding offtake capacity is under negotiation for the company’s LNG project in Puerto Libertad, including 14 mmty for which memorandums of understanding have been signed.