Floating specialist Excelerate Energy LP has reached a deal to import liquefied natural gas (LNG) to Brazil as the nation continues to deal with rising power demand amid a historic drought that has left hydroelectric reservoirs depleted. 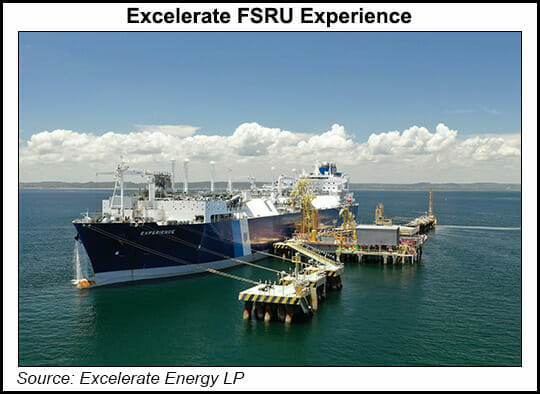 Under an initial deal struck with state-owned Petróleo Brasileiro SA, aka Petrobras, Houston-based Excelerate would deploy one of its existing floating storage and regasification units to the Bahia terminal. The unit would import LNG and regasify it for sale to Brazilian customers. The deal is still undergoing financial, legal and regulatory processes, Excelerate said.

“Petrobras’ decision to advance in the tender for leasing the Bahia regasification terminal to Excelerate is an important milestone in the process of promoting competition in the Brazilian natural gas sector. We understand that increasing access to flexible LNG supply is critical to stabilizing Brazil’s energy system, especially during adverse weather events such as the current severe drought,” Excelerate CEO Steven Kobos said.

This is not Excelerate’s first foray into the Brazilian market. The company has provided regasification to Brazil since 2012. In September 2020, Excelerate’s FSRU Experience broke an industry record for send-out capacity by reaching 1.06 Bcf at Petrobras’ Guanabara Bay LNG regasification terminal.

“Petrobras has trusted Excelerate with critical services for years, and we expect to continue to support Petrobras’ efforts to increase LNG access for the Brazilian energy market,”Kobos said. “We are proactively engaging with customers to assess their natural gas requirements and coordinating with Petrobras to ensure a timely and seamless transition of service.”Other LNG suppliers have recently notched deals to supply Brazil’s beleaguered power sector. New Fortress Energy Inc. said in early August it had inked eight sales agreements for 5.8 million gallons/day of LNG to underpin import terminals and power generation projects under development along Brazil’s coast. The nation saw record levels of imports in June, with most of the cargoes so far in 2021 being sourced from U.S. terminals.