By combining natural gas growth with native economic ambitions, Canada’s natural gas industry is trying out a formula for an environmental, social and governance investment standard that caters to stakeholder demands. 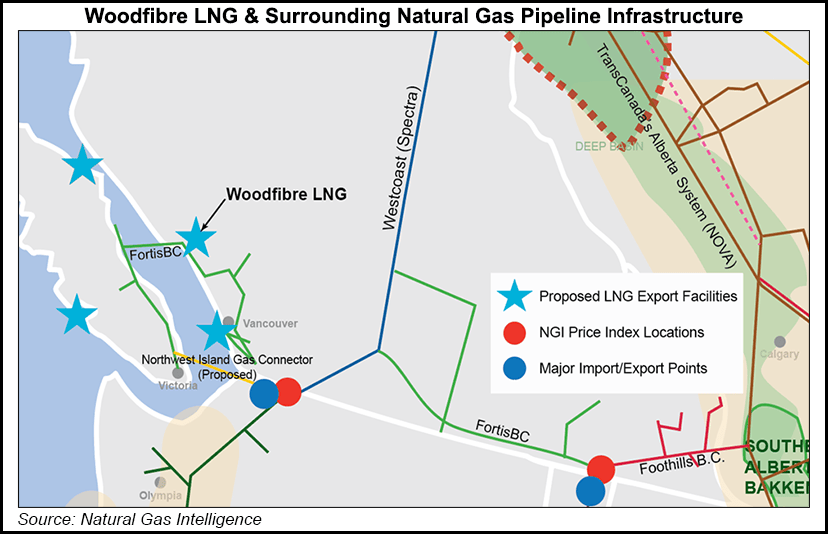 A trio of British Columbia (BC) liquefied natural gas (LNG) projects, seeking total exports of as much as 2.76 Bcf/d, is employing cooperation with tribes in the territories where their Pacific coast terminals would be built.

Woodfibre LNG sponsor Pacific Oil & Gas Ltd. did a benefits deal with Squamish First Nation and obeyed tribal environmental policy with its C$1.6 billion ($1.3 billion) plan for a terminal for up to 260 MMcf/d near Vancouver.

On BC’s coast at Kitimat, Haisla First Nation is 50% owner of the C$3 billion ($2.4 billion) Cedar LNG proposal to export up to 500 MMcf/d in a partnership with Pembina Pipeline Corp.

Still farther north near Prince Rupert, the newest BC project Ksi Lisims LNG is also the biggest both in planned export volumes of up to 2 Bcf/d and in the level of native and industry collaboration.

The native-industry LNG partnerships in BC all emphasize that their exports would contribute to lowering global greenhouse gas emissions by replacing coal with natural gas in overseas thermal industries.

The native partnership approach is becoming a habit, spreading to firms entering the Canadian fossil fuel industry from outside its Alberta home base.

Kanata Clean Power & Climate Technologies Corp. in Vancouver formed a partnership with the Frog Lake First Nation in northern Alberta to try breaking into the energy industry with a green variety of fossil fuel-driven electricity generation.

The corporate and tribal pair announced a plan for a 300 MW station that would use a low-emissions version of natural gas-fired output invented by a Texas environmental technology pioneer, Net Power LLC. With Frog Lake holding 51% ownership and already an oil producer, the electricity project is billed as “Indigenous-led net zero infrastructure.”

An industry and native combination also figures in vows by Alberta oilsands producers to comply with a Canadian government climate policy target of national net-zero greenhouse gas emissions by 2050.

Haisla chief Crystal Smith described native motivation to move into a green version of the Canadian fossil fuel industry when her tribe’s Cedar LNG partnership with Pembina was announced in June.

“With a strong partnership, Cedar LNG will bring tremendous economic opportunities and benefits ensuring the Haisla people have control of our own future,” said Smith.

While Ksi Lisims LNG has not yet released a cost forecast for its planned jumbo export terminal, the formal project description filed with the BC Environmental Assessment Office illustrates the extent of hopes for native partnerships with industry.

“Approximately $45 billion will be invested by these companies [in the Ksi Lisims group] to produce the gas needed for the project over its life,” predicted the filing.

“All of this spending will result in tax and royalty revenues to the provinces and the federal government, employment income for Indigenous and non-Indigenous peoples, and an expansion of business opportunities.”

Ksi Lisims LNG “will contribute to economic reconciliation by recognizing and implementing the Nisga’a Nation’s authority over economic development on lands they own,” adds the filing.

“The project will be an important component in the Nisga’a Nation’s social development strategy, providing extensive opportunities for jobs, training and new businesses to be formed, both during construction and operation.”