A five-year construction deadline extension has been granted to the C$1.6 billion ($1.2 billion) Woodfibre liquefied natural gas (LNG) export project on the southern Pacific coast of British Columbia (BC). 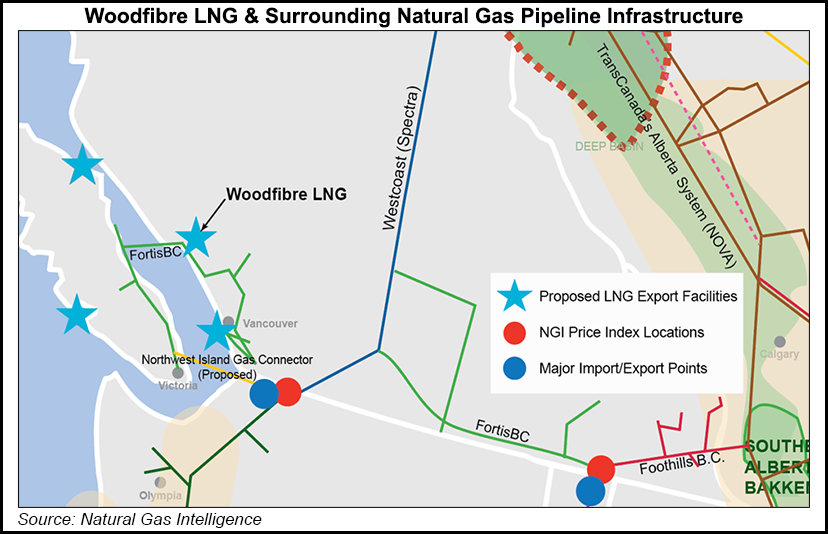 The BC Environmental Assessment Office (BCEAO) set a new permit expiry date of October 2025. The schedule extension does not create hazards or harm rights of the native tribe next to the planned terminal, the agency said.

The BCEAO noted that C$13 million ($9.8 million) has been spent on preparing for Woodfibre’s construction on the site of a former pulp mill beside the scenic Sea to Sky Highway between Vancouver and the Whistler ski resort.

When built, the terminal would employ 102 to load about 40 overseas tankers a year, with annual exports of up to 2.1 million metric tons made from 260 MMcf of provincial gas production.

The Covid-19 pandemic, project revisions and equipment delivery interruptions prompted Woodfibre to cancel a planned construction start this summer and seek the permit change. A new start target of mid-2021 has been set, but the five-year deadline extension enables adaptations of the schedule resulting from unpredictable market conditions.

Singapore-based owner Pacific Oil & Gas Ltd. has secured a supply source with a corporate takeover of Calgary producer Canbriam Energy Inc. A sales agreement has been made with BP Gas Marketing Ltd.

Woodfibre has a 40-year Canadian gas export license, a pipeline service agreement with utility FortisBC and a sales arrangement with an affiliate of China National Offshore Oil Corp., aka CNOOC.

A cooperation and benefits agreement has been made with the Squamish Nation, an indigenous nation that has also granted a favorable environmental verdict after doing an independent assessment. Longstanding BC project opponents, My Sea to Sky and Ecojustice, said they would appeal against the permit extension.