Six energy prognosticators over the past week have raised their outlooks for domestic natural gas prices this year, with one indicating that $4.50/MMBtu this summer is “on the table” based on a colder-than-expected end to winter and slowing production in major onshore basins. 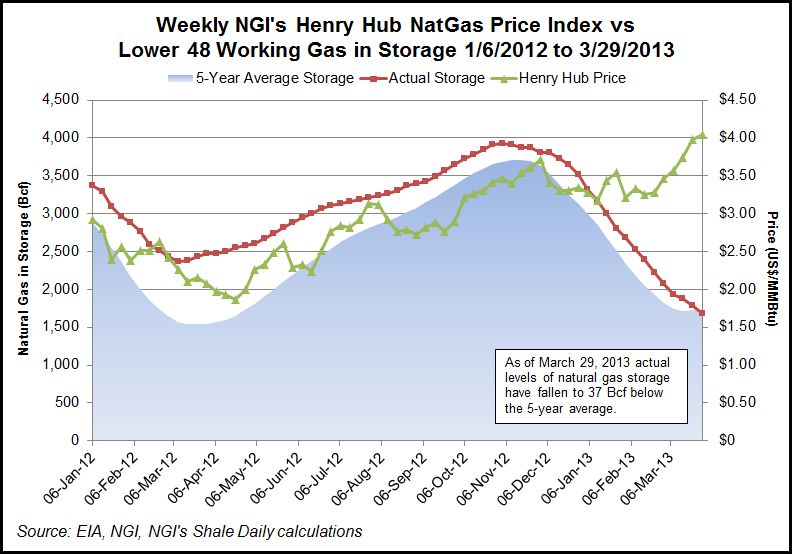 The reasons cited by each group mainly were the same: there was a cold end to winter and the last two Energy Information Administration (EIA) Form 914 data reports indicate declining production. Barclays also did their own forward-looking producers’ survey to determine “aggregate guidance” was for lower gas production this year.

The last two storage draws, which were very large for this time of year, were prompted by lower production, some of the analysts claimed. Others, however, pointed out that some of the large draw could be blamed on storage mechanics and the deadline for customers to withdraw all of the past year’s gas in the near future so this year’s fills can begin. Also, customers likely paid less than current prices over the past year for the gas in storage and wanted to use up their cheaper gas, betting that the market would go lower as it gets further into the shoulder months.

In fact, the year-on-five-year average, which has been in a significant surplus situation for quite some time, just last week slipped into a deficit. For the week ending March 29 the EIA reported inventories are now 37 Bcf below the five-year average of 1,724 Bcf.

Forecasts issued over the past week from high to low are:

Goldman Sachs last Friday recommended that investors position themselves for “higher prices over the course of 2013.” The gas rig count also is predicted to surpass the 500 mark by the end of the year.

“In particular, we now expect prices to average $4.50/MMBtu over the second half of this year, as a return to growing production is required to balance the market after this summer, in our view.”

Over the medium-to-long term, Goldman is forecasting equilibrium prices in the $4.00 to $4.50 range, and “we now expect prices will need to average $4.50/MMBtu in the second half of 2013 to bring on the production growth required to balance the market…Accordingly, as current 3Q2013 prices average $4.01/MMBtu and 4Q2013 prices average $4.13/MMBtu, we recommend positioning for higher prices over the course of 2013.”

All of the analysts cited colder March weather in helping to revise the forecasts higher.

“The cold weather in March means the 2012/13 winter will end up in line with historical averages, despite the mild weather in December,” said the Goldman team. “Combined with the ongoing tightening shift in the underlying supply/demand balance resulting from structural demand growth against stable production, this means there was less than 1.7 Tcf of natural gas in storage by the end of March this year, compared to close to 2.5 Tcf last year.

“As a result, we now estimate only 2.0 Bcf/d of coal-to-gas switching will be required on average this year to reach a storage level by the end of the summer of around 3.65 Tcf, which will allow prices to continue to recover over the course of this year,” the Goldman analysts said.

Production growth from “relatively price-insensitive sources” like the Marcellus Shale and associated gas are continuing, but “the momentum has likely peaked as rigs have dropped even in the Marcellus, and liquids-rich gas and oil drilling has stabilized, and natural gas liquids prices have been under pressure over the past year.”

Specifically, said the analysts, Haynesville Shale output is in meaningful decline, which has to be reversed. Encana Corp.’s decision in February to increase its Haynesville rig count to five from three this year (see Shale Daily, Feb. 19) had “seemed early to us given where prices were at the time, [but] similar measures by other producers are needed.

“So far most producers have been very reluctant to increase gas-directed drilling, but with the March rally this could start to change. Specifically, we assume the U.S gas rig count rises back above 500 by the end of 2013 and above 600 by the end of 2014, from below 400 currently.”

That forecast is at odds with Barclays, which late last month predicted that the gas rig count would remain below the 450 mark this year (see Shale Daily, April 1).

“While Punxsutawney Phil’s prognostication for an early end of winter was wrong and we saw gas prices increase, the colder winter ending weather has made us more bullish on gas prices for 2013, thus we are raising our 2013 gas price forecast by 60 cents from $3.25/Mcf to $3.85/Mcf,” wrote Raymond James analysts led by J. Marshall Adkins.

“While we are raising our 2013 numbers, this is still slightly below the strip as we believe higher winter prices will encourage a reversal in the coal-to-gas switching through spring 2013. Thus, we expect summer 2013 natural gas prices to strengthen as the market struggles to refill gas storage this summer.”

In the longer term, “gas fundamentals should continue to be relatively tight as cheap U.S. natural gas prices encourage solid demand growth but low-cost shale gas allows the 2014 gas price to balance the supply and demand at $4.00/Mcf. This represents a 25-cent increase from our prior forecast. Longer term, we remain convinced that both U.S. gas demand and U.S. gas supply can grow profitably at a $4.25/Mcf gas price.”

“Accordingly, we now think that an average gas price of $4.00/Mcf-plus for the next three quarters will be necessary to reverse from the winter heating season tightness (of around 2 Bcf/d undersupplied) to a much looser (or 2.6 Bcf/d oversupplied) gas supply/demand situation during summer injection season…”

TPH analysts noted in their review that U.S. weather was 6% colder than normal in 1Q2013, with the brunt of it coming in late March. As important, it was an “impressive 28% colder” than in 1Q2012.

The TPH analysis “suggests that 215 Bcf of the 400 Bcf excess draw versus normal (1,830 Bcf less 1,430 Bcf) is explained by colder temps, which leaves another 185 Bcf draw to be explained by improving supply and demand fundamentals relative to 10-year norms,” which in turn implies a 1-2 Bcf/d “undersupplied gas market heading into summer injection season.

“The gas market was not exposed to $4.00/Mcf for much of 1Q2013 so it is difficult to extrapolate this large undersupply for the rest of the summer.”

If the gas market were to remain undersupplied by 1 Bcf/d for the 200 days of injection season, then storage would end at 200 Bcf less than normal, or 3.6 Tcf, noted TPH.

“This would keep gas prices $4.00/Mcf for the summer in order to entice exploration and production (E&P) companies to bring more gas-directed rigs back into service (already our base case for late 2013 and 2014). Even if the gas market is balanced this summer, 3.8 Tcf is not scary as long as production is flat/declining. This is our base case.”

Because of the cold end to winter and lower ending storage, a $4.50/Mcf summer gas scenario is “back on the table,” said the TPH analysts. “Is it possible? Certainly.” EIA-914 data production indicates output is “flat/declining, which puts an upward bias on gas price, plus a production response from rig count increase lags six months. This is not our base case but we recognize that hot/tropical weather could enable this scenario.

“However, rising gas prices this summer would likely provide E&P companies with an opportunity to hedge 2014 gas prices at similar levels ($4.50-plus/Mcf), which would increase the chance of an over-correcting supply response.

“If gas prices rise this summer above current levels, we will become more nervous about 2014 fundamentals. Electricity fundamentals would also suggest that sustained $4.50/Mcf gas through the summer is unlikely as Central Appalachian coal becomes in the money.”

If there were a mild summer, a $3.50/Mcf gas price would be possible “but we believe it would be short-lived.”

Morgan Stanley analysts Adam Longson and Tai Liu on Monday said, “Better demand trends have taken our end-March inventory estimate down from just under 1.9 Tcf a month ago to just under 1.7 Tcf today. More normalized end-of-March storage numbers have reduced the market’s reliance on coal-to-gas substitution in the power sector to balance the market,” said the duo.

In addition, gas demand will be lifted in the months ahead, they said, by the prospects of lower hydro output in the Northwest, the expectation that at least one San Onfre nuclear unit in California will remain offline this summer, more gas exports to Mexico and additional gas-based power generation capacity.

“As a result, summer gas prices will not need to trade at an artificially depressed level in order to stimulate price-sensitive demand in the power sector,” said the Morgan Stanley team.

Based on evidence that U.S. gas production has flattened and the shift back to coal-fired generation is “stickier” than expected, Stephen Smith last Thursday raised its price forecast through the rest of 2013. In 2014 Smith’s team raised prices by 40 cents from a previous forecast to $4.40/MMBtu.