Arkansas’ gross revenue from natural gas severance taxes so far this year is trending higher than during 2011, which turned out to be a record year for gas severance tax revenue in the Natural State. 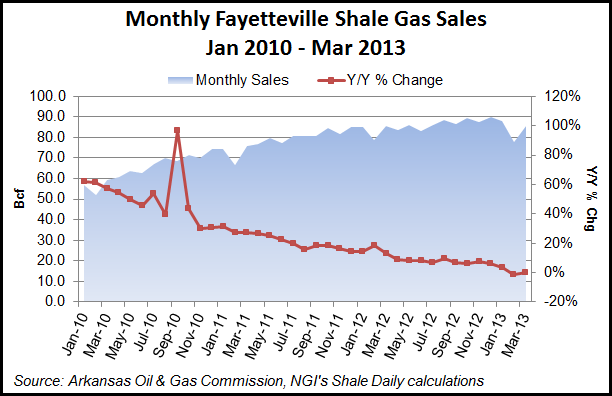 From January through May, natural gas severance tax revenue adds up to nearly $24.98 million. During the first five months of 2011 the state received nearly $23.14 million. During all of 2011, the state collected a record of nearly $58.91 million. The total collected last year was $40.96 million.

During the first quarter of this year, gas production subject to severance tax in Arkansas was nearly 277.24 Bcf.

Arkansas is home to the Fayetteville Shale, a dry gas play that has seen its rig count decline 40% from year-ago levels as producers have favored wet gas plays due to the economic uplift natural gas liquids production provides. In analyzing Energy Information Administration and Lippman Consulting data for March 2013, the Fayetteville was the fourth largest U.S. dry shale gas producer at 2.71 Bcf/d. The top three were the Marcellus (8.37 Bcf/d), the Haynesville (5.85 Bcf/d) and the Barnett (4.70 Bcf/d).

According to Arkansas Oil & Gas Commission data and NGI‘s Shale Daily calculations, monthly gas sales out of the Fayetteville Shale have been growing fairly steadily until recently, where it appears the rate of increase has slowed to the point of being flat year-over-year. After logging sales of 90 Bcf in December 2012, Fayetteville gas sales dropped to 77.9 Bcf in February 2013 before rebounding a bit to 85.7 Bcf in March. With the Fayetteville being one of the early major natural gas shale plays, the question is whether this plateau is occurring due to geology or because of a lack of investment dollars.

However, this production drop might be more attributable to the company focusing on its Marcellus acreage in 2013 due to economics than any indication that the Fayetteville as a play has peaked.

Spot prices at the Henry Hub are up from just over $2/MMBtu a year ago to around $3.79/MMBtu.

In its May Short Term Energy Outlook, the Energy Information Administration said it expects the Henry Hub natural gas spot price, which averaged $2.75/MMBtu in 2012, will average $3.80/MMBtu in 2013 and $4.00/MMBtu in 2014, about 27 cents/MMBtu and 40 cents/MMBtu higher than forecast in the previous month’s outlook, respectively (see Shale Daily, May 9).