The wave of liquefied natural gas (LNG) cargoes headed to Europe has started to slow as storage on the continent rises, but there are signs that extreme prices could be delaying an anticipated ramp up from Asian buyers. 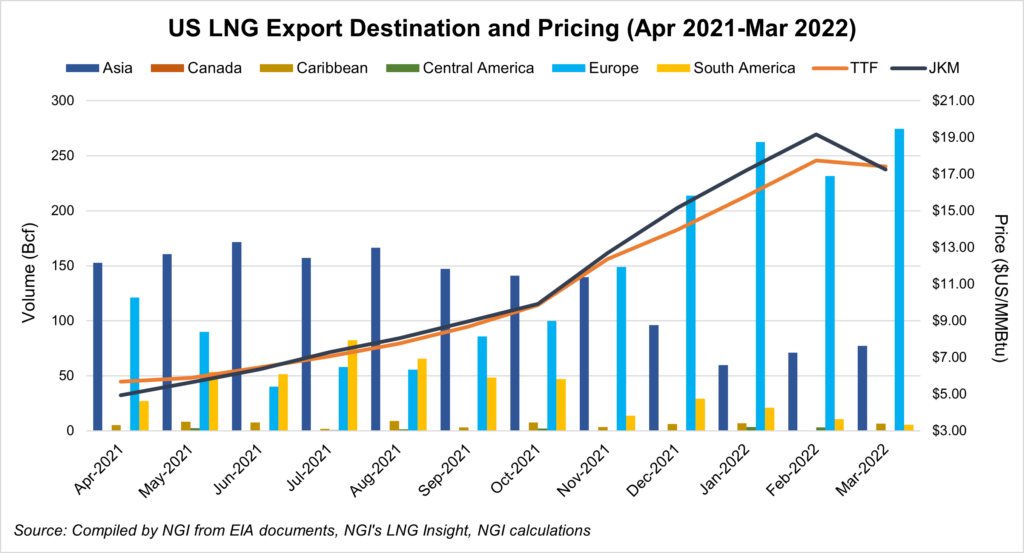 Instead, more volumes of LNG have been steadily heading to destinations like Brazil, according to research from data firm Kpler. South America has been experiencing a drought and related impacts to hydroelectric power similar to last summer. Although, Kpler’s Ryhana Rasidi, LNG and gas analyst, said “Brazilian hydropower is holding up a bit better at present relative to year-ago levels.”

Meanwhile, volumes of LNG from the United States to Europe have started to decline from previously lofty heights. The U.S. shipped 6.97 million tons (Mt) in May, with at least 60% being tracked to landing points in Europe, according to Kpler data. In March, when U.S. terminals chilled 7.28 Mt of gas, 75% of those volumes were sent to Europe.

European Union storage hit 47.5% at the end of May, falling just under the five-year-average for the same period. Rystad Energy reported storage in Germany and Denmark were 48% and 54% full, respectively, compared with 30% and 34% full a year earlier.

Europe has been offering premium prices for LNG since the beginning of the year as flows of spot gas via pipeline from Russia became restricted. Prices and volumes to Europe soared even higher after Russia invaded Ukraine in February, triggering sanctions and new policies to forego Russian gas.

The dynamic shift has created more competition for Asian buyers that have typically purchased a large swathe of volumes on the market, especially from the United States. However, even as the Dutch Title Transfer Facility benchmark receded more than 3% for the week, Rasidi said there may already be signs of demand destruction in Asia.

Rasidi said there hasn’t yet been a “significant shift in vessel movement to Northeast Asia” and import volumes to the region have remained flat month/month “at around 15.6 Mt in May.” That is about 1.6 Mt lower than the same period last year. China, which recently lifted Covid-19 precautions in some of its most populous districts, also saw 2 Mt less in LNG deliveries year/year.

“Regarding the situation in China, there is not much evidence that China has started to lift more LNG for now and this will probably continue, even as China slowly opens up,” Rasidi said.

Bloomberg reported Friday that Northeast Asia spot LNG prices held between $20-$25/mmbtu as China increased Covid-19 testing and monitoring. The Japan/Korea Marker for gas delivered in July held steady at around $24/MMBtu over the past three days after a $2 increase over the Memorial Day weekend.

China’s domestic gas production has been on the rise to record levels and could continue as the country “attempts to limit the impacts of sky-high LNG prices,” Rasidi said. In March, China released its latest five-year-plan that set domestic natural gas production at 22.3 Bcf/d by 2025, 3.0 Bcf/d above last year’s average production. That increased production could keep Chinese buyers away from the spot market, at least “until we see domestic gas storage depleting to uncomfortably low levels ahead of winter,” Rasidi said.

Volumes to South Asia, on the other hand, have been on a recent rise, but not necessarily in connection with the slack from Europe. India and Pakistan have seen an increase in LNG imports as of May, but Rasidi said it was mostly connected to a heatwave and more supply from long-term contracts from Qatar and Oman.