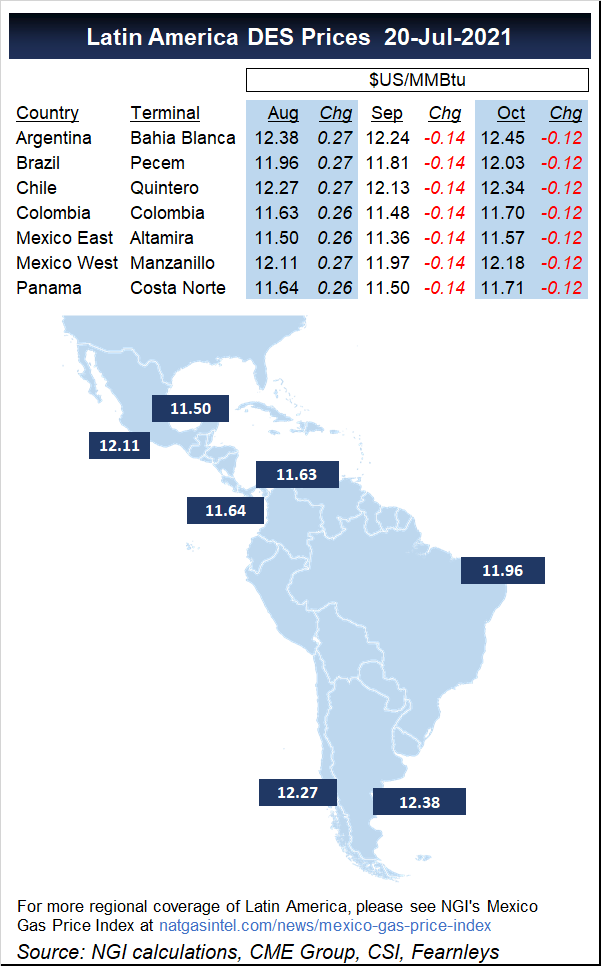 Brazil saw its highest-ever level of LNG in June, when imports clocked in at 657,000 tons. This compared to zero cargoes last June and 184,000 tons received in June 2019.

“A historic drought in the country has reduced hydropower reservoir levels, which is increasing the call on gas for power demand in the country,” Kpler analyst Charles Costerousse told NGI. He added that they are seeing “strong buying behavior” from state oil giant Petróleo Brasileiro SA (Petrobras).

Overall, LNG imports into Latin America are soaring. For the January through June period, imports were 6.53 million tons, up 94% compared to the first six months of 2020, and up 35% compared to January-June in 2019.

“Imports into Latin America are indeed reaching record highs this summer, as this market continues to pull ex-U.S. and ex-Middle East cargoes away from Europe,” Costerousse said.

In Argentina, “natural gas for heating purposes typically peaks around this time of the year, with LNG imports being supported by disappointing domestic gas production and lower pipeline imports from Bolivia. There is also a reported water shortage in Argentina, which is causing lower hydropower generation and thus a higher utilization rate of gas-fired thermal plants,” Costerousse said.

A tight global market has meant a busy summer for U.S. LNG exporters. Feed gas deliveries to U.S. export terminals have been consistently above 10 Bcf/d. Meanwhile, other emerging market powerhouses like India are showing similar buying trends to Brazil as economies rebound from the coronavirus downturn.