Continental Resources Inc. disclosed Tuesday that it has begun reworking a legacy shale play in south-central Oklahoma geographically similar to the Bakken, Marcellus and Eagle Ford shales that could add 1.8 million boe to its reserves in the next few years. 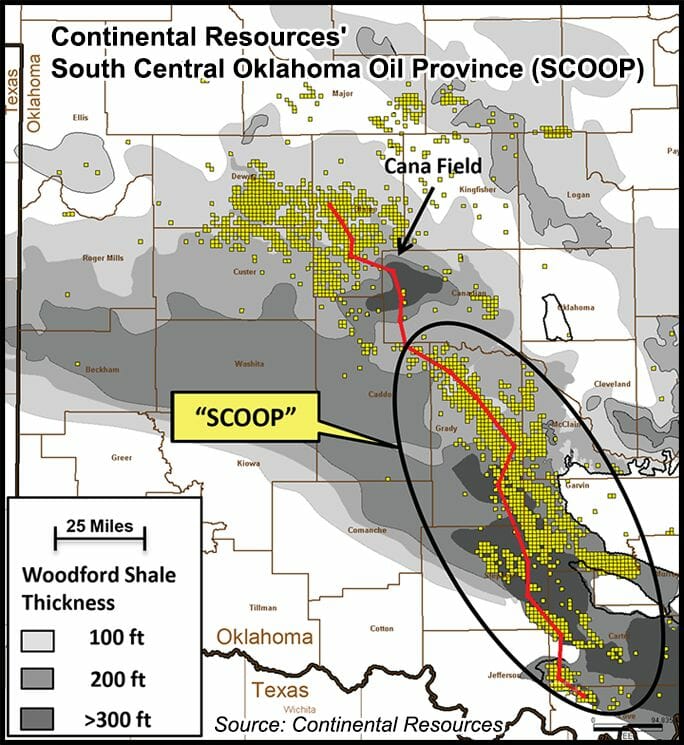 The South Central Oklahoma Oil Province, dubbed “SCOOP” by the management team, is in a legacy area of the state, the “epicenter of Oklahoma oil,” where 3.2 billion bbl of crude oil has been produced since the early 1900s from 60 reservoirs.

Continental dished on the SCOOP during a day-long investor conference in which management laid out a strategic five-year plan (see Shale Daily, Oct. 10).

The Oklahoma City-based producer in recent years has made its name and fortune in the Bakken Shale, but it hasn’t been concentrating its talents in just one place. The Bakken, said CEO Harold Hamm, “provided a large amount of comfort and reliability to our new five-year plan.”

With some operational stability now in place, Continental has been amassing acreage in other stealth plays over the past couple of years, including close to 170,600 acres of land in the SCOOP, which the company described as an “oil-rich” play within the Anadarko Basin. According to exploration chief Jack Stark, the SCOOP has “one of the thickest, best quality resource shale reservoirs in the country,” with up to 400-foot oil-rich shale and a “dual reservoir target” for liquids.

SCOOP is “premium Woodford,” six times the reservoir volume of the Cana field, said Stark. Continental now sees the potential for 1.8 billion boe net reserve from 2,200 drilling locations. The land mass is estimated to be 25-50% oil and 60-75% total liquids. Based on 80-acre spacing, $350/Mcf gas and $90/bbl oil, Continental’s rate of return for SCOOP now is estimated at 40-55%.

The Woodford Shale of late was a natural gas draw, but liquids and oil now are bringing the operators.

On a map, SCOOP appears to be a southeastern extension of the Cana-Woodford Shale. What makes the re-emerging play “so good” is its age, which is Devonian. That was an “ideal time for deposition of world-class source rocks,” according to Continental executives. The Bakken and Marcellus also are Devonian age-shales.

Continental has been quick to lease as much acreage as it can in the play. At the end of 2010 it had about 94,000 acres there, with 3% held by production (HBP). Today its 170,000-plus acre leasehold is 23% HBP, with 80% of the drilling done in the past 18 months. More than 600 square miles so far have been derisked, indicating a “broad repeatable liquids fairway.”

According to the company’s geologists, SCOOP has identified three different fairways: the eastern side is oil, the middle condensate and the western part of the play is natural gas. None of Continental’s leasehold is in the gas window.

SCOOP is “a huge opportunity for the company and another great asset for us because we’re looking at an asset with rates of return that compete head-to-head with what we’re doing in the Bakken,” said Continental exploration chief Jack Stark. “With that as another opportunity that is widespread and repeatable, it gives us one more avenue of growth that has as much upside potential as we see in the Bakken.”

SCOOP oil wells now cost around $8.5-9 million to complete; the condensate wells are running around $9-9.5 million from start to finish. Those costs should come tumbling down as Bakken technology is transferred to Oklahoma. Using “rapid gains through technology transfer” Continental already has drilled its first cross-unit well, otherwise known as an extended lateral, in the plan. More cross-unit wells are planned for 2013.

“We call the Bakken the ‘king’ of the tight oilfields,” said Stark. “It is so large and just like other good fields, it keeps getting better. We think the Bakken should be used as a template…for oilfield development.”

The Bakken template is working. “Technology transfer is a huge part of this business right now,” said Stark. “We’re accessing what were once considered just source rock. To be able to do that takes technology. Anything we learn from one resource plan can be transferred to the next play. “There’s always some adjustment here and there, but the bottom line is, technology we have perfected” and its “directly transferable” to “what we’re doing in the Woodford.”

Tudor, Pickering, Holt & Co. analysts Brian Liveley and Brad Pattarozzi said Wednesday it’s “still early” to assess the SCOOP, with only 35 wells drilled to date, but “this region has the potential to add materially to production, reserves and valuation” for Continental. And considering their five-year production and reserve targets, SCOOP will need to deliver.” Assuming 160-acre well spacing, Continental “would have 1,100 net locations and 840 million boe reserve potential.”